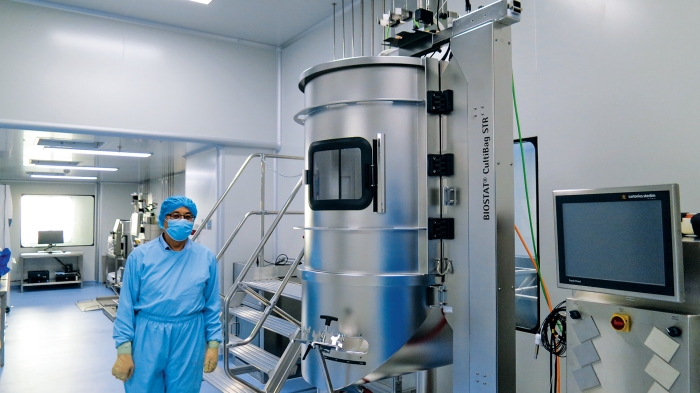 Credit: Jean-Francois Tremblay/C&EN
MabPlex’s Liang shows off one of the company’s disposable bioreactors.

“We can do it cheaper. We can do it faster.” These are the typical promises Chinese suppliers of almost any product or service make to their potential customers.

The claims are perhaps credible when asserted by toy manufacturers or purveyors of basic chemistry research services. But MabPlex, a new company in eastern China, is making similar promises for the delivery of antibody-drug conjugates, or ADCs, hard-to-manufacture molecules consisting of an antibody linked to a cytotoxic warhead.

Within the drug industry, China mostly plays the role of supplier of starting materials, simple active ingredients, and chemistry research services. Yet the country is increasingly fostering firms with more sophisticated research and manufacturing capabilities. Able to produce some of the most complex molecules used in the treatment of cancer, MabPlex and companies like it illustrate the advances under way.

Based in Yantai, a beach resort town in the coastal province of Shandong, MabPlex says it has invested $80 million in its R&D and production facilities. It employs about 100 people.

Led by scientists who spent decades in the U.S. and Europe, MabPlex claims it has in a single location all the equipment and know-how required to produce ADCs. It’s an endeavor that involves—among other steps—chemical synthesis, mammalian cell cultivation, and a tricky linking process.

MabPlex labs have been operating for only a few months and the firm only recently validated its manufacturing process, but customers are already lining up, so far mostly from within China.

“From the outset, we designed this company to serve Western customers,” says Jianmin Fang, MabPlex’s chief executive officer. But the firm’s initial plan is to focus on innovative firms from China that are developing new ADCs. “Once we have established a track record here, it will be easier to win over foreign customers,” Fang adds.

Although MabPlex’s typical potential customer is looking to produce in China drugs that will be sold in China, others are looking to use the firm to supply Western markets. At least one large Western company has visited MabPlex to discuss a potential supply agreement, Fang says.

ADCs are a relatively new and promising way to fight cancer. The antibody delivers a cytotoxic payload directly to targeted tumor cells, leaving healthy cells alone. So far, only two commercial drugs make use of the technology: Adcetris from Seattle Genetics and Kadcyla from Roche. But dozens are in clinical trials, and even more are in preclinical development.

At the moment, drug companies that have embarked on ADC development have limited options when looking for a contract manufacturer. Internationally, the two largest ones are Switzerland’s Lonza and India’s Piramal. The latter manufactures ADCs at its site in Grangemouth, Scotland.

In China, the most established contractor is the pharma services giant WuXi AppTec. Chris Chen, CEO of WuXi Biologics, says the firm conducts ADC R&D and manufacturing at its facilities in Shanghai. Antibodies are cultivated in the nearby city of Wuxi and linked with cytotoxic agents at the company’s commercial manufacturing plant in Jinshan, a district of Shanghai.

WuXi, Chen notes, seeks to offer its services mostly to Western customers that are developing treatments for the global oncology market. In May, WuXi was part of a Chinese consortium that acquired Ambrx, a California-based biotech firm focused on ADCs.

In China, too, ADCs are a hot area for researchers, Fang says. In June, a science symposium that MabPlex organized drew 200 scientists to Yantai, he notes. Although the company’s facilities were inaugurated only in February, it is already working on about 10 projects, each one worth a minimum of $500,000, Fang claims. 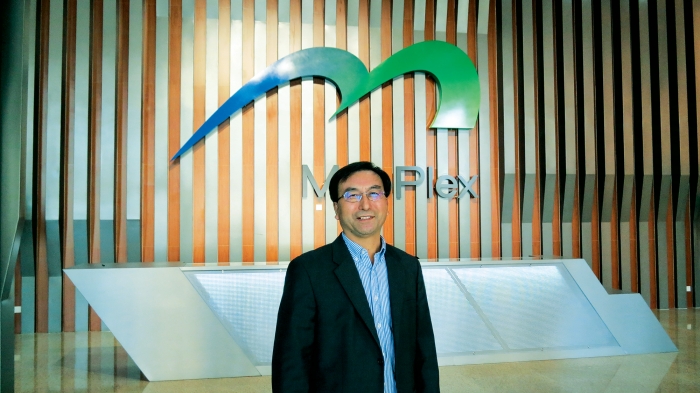 One project is with the new Chinese company Livzon Mabpharm. Another is with RemeGen, a biotech firm that Fang founded a few years earlier. Located adjacent to MabPlex, RemeGen employs about 200.

Fang says he also knows what Western companies expect. He lived for about 20 years in the U.S. and Canada before returning to China five years ago to become a professor of molecular medicine at Tongji University. A molecular biologist, he did a postdoc at Boston Children’s Hospital. He also worked at several antibody research firms in California.

Fang says he is interested not only in research but also in turning lab results into treatments that can help patients. This, he adds, is what motivated him to draw up the business plans for RemeGen and MabPlex.

The largest investor in both companies is RC Pharma, a Yantai-based producer of traditional Chinese medicine that is aiming to diversify its portfolio. It was through RC that Fang got to know Yantai. “After we started talking with RC, we discovered that Yantai is a nice place to work and that the lower cost of living here could help us to attract and retain researchers,” he says.

To assist him in running MabPlex, Fang has recruited a team of researchers and pharmaceutical industry executives with relevant experience. For instance, MabPlex’s head of manufacturing, Qibin Liang, is that rare Chinese executive who learned Western drug manufacturing standards by working in overseas plants, in his case operated by Bayer and Genentech. Most Chinese scientists working in the West seek laboratory or front-office positions.

ADCs are made in small quantities, even for a commercial drug. At the moment, all of MabPlex’s research and manufacturing facilities fit in two modest buildings adjacent to each other. The company recently validated its production systems to make sure they can reliably produce ADCs of constant quality, Fang notes.

He sees MabPlex’s inexperience compared with that of Western rivals as an advantage rather than a liability. At MabPlex, he says, projects can be handled right away. In contrast, major firms such as Lonza and Piramal are working on so many ADCs that their customers have to take their turn in line, Fang claims.

Chinese regulations will further buoy MabPlex, Fang expects. Under Chinese law, only drugs made in China can be designated as Investigational New Drugs that can be tested on patients in China, he notes.

WuXi professes to be unconcerned by any competitive threat that MabPlex may pose. WuXi’s Chen notes that the firm has more than 120 people working specifically on development, manufacturing, and testing of ADCs. In addition, the big firm is able to draw on hundreds of other people for the synthesis of intermediate materials and cytotoxic compounds. “In ADCs, we are the largest in Asia,” he boasts.

Although keen to learn more about a new competitor in Yantai, executives at Piramal appear similarly unconcerned by MabPlex. Ramesh Subramanian, Piramal’s vice president of marketing, says the company has already produced “over 600 batches of 130 ADC candidates” and gained experience with “over 40 toxins and toxin-linker systems” during the past decade.

As for Fang’s claim that customers can expect delays at a firm such as Piramal, Subramanian says, “We expect to be able to continue to meet the needs of all our current and future collaborators by careful planning and appropriate investments.”

Business success for MabPlex is by no means ensured. The company could fail under competitive pressure or simply because firms that are now developing ADCs discover the technology is not as effective as expected in treating cancer. But whatever happens in the marketplace, MabPlex will have succeeded in demonstrating the improving capabilities of China’s pharmaceutical services sector.