The Materials The Cities Of The Future Will Need 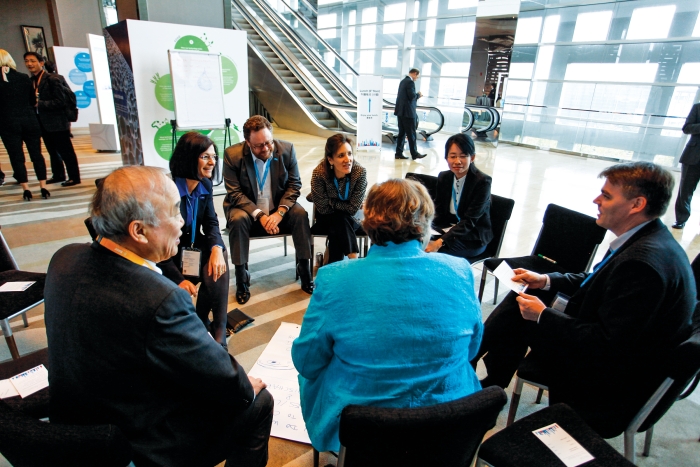 Credit: BASF
Meeting in small groups, symposium attendees sought answers to big-picture questions such as “How do we implement a circular economy?”

Buildings that grow themselves. Urban stadiums that can be dismantled once a major sporting event is over. These are just a couple of the ideas that emerged from a recent BASF event that brought together approximately 400 scientists, architects, and customers in Shanghai to discuss the future of urban living and the materials that will be needed to sustain it.

To celebrate its 150th anniversary, BASF, the world’s largest chemical company, has been holding a series of events throughout the year. They included a January brainstorming session on urban waste and clean water in Mumbai (C&EN, Feb. 9, page 16) and an April celebration at its headquarters in Ludwigshafen, Germany, where German Chancellor Angela Merkel spoke, at times controversially (C&EN, May 4, page 9).

The company selected the megalopolis of Shanghai for its most recent event, a scientific symposium to discuss materials the cities of the future will require.

One of BASF’s objectives, not surprisingly, was to generate new business. “We wanted to talk about the vision and then see if we have some new materials that can help and what new projects we could work on,” said Harald Lauke, the company’s president of advanced materials and systems research. Lauke is moving to Shanghai in January as part of an expansion of the company’s research activities in the city.

Martin Brudermüller, BASF’s chief technology officer, noted in his opening address that water quality, architecture, mobility, and quality of life are four areas of urban living where science can play a role. And it turned out that putting together architects, scientists, and employees of a major chemical company to talk about these areas can yield surprising results.

For example, a multidisciplinary workgroup assembled during the event came up with the idea—feasible, the participants claimed—of developing self-growing building materials that would expand upward from the ground.

The workgroup also conceived of a floating hollow-concrete foundation material on which waterfront structures such as sports facilities could be built—and later dismantled or floated away. Cities that hold Olympic events don’t necessarily want to be saddled afterward with permanent infrastructure on prime real estate, explained David Gianotten, managing partner of the Dutch architectural firm OMA.

In addition to generating new product ideas and better understanding market and scientific trends, one of BASF’s goals for the conference was to interact with scientists from China and other countries in the region as the company decentralizes its R&D activities away from Europe.

On Nov. 9, BASF inaugurated an expansion of its R&D center in Shanghai’s Waigaoqiao district. The project represented an almost $100 million investment and involved relocating to Shanghai the advanced materials research activities that Lauke heads.

“We need management power here in Shanghai,” Lauke said. The company, which traditionally has concentrated basic research in Germany, aims to conduct about 25% of its R&D in Asia, he added. The region currently accounts for only 7% of the company’s R&D.

Scientists attending the BASF conference seemed pleased with the chance to interact with the company’s staff. For example, Junpo He, a professor in the department of macromolecular science at Fudan University, attended with a few of his students.

He knows BASF, having worked as a postdoc at BASF’s polymer research center in Ludwigshafen in 2002 and 2003. And the scientist already collaborates with the company on several research projects in Shanghai.

“I think this event is very helpful,” He said during the conference. “Students don’t always understand the corporate perspective.”

Business
BASF Tackles Urban Living
Business
BASF Kicks Off Brainstorming Tour
Business
BASF Readies 150th Birthday Celebration
Share X
To send an e-mail to multiple recipients, separate e-mail addresses with a comma, semicolon, or both.
Title: The Materials The Cities Of The Future Will Need
Author: Jean-François Tremblay
Chemical & Engineering News will not share your email address with any other person or company.