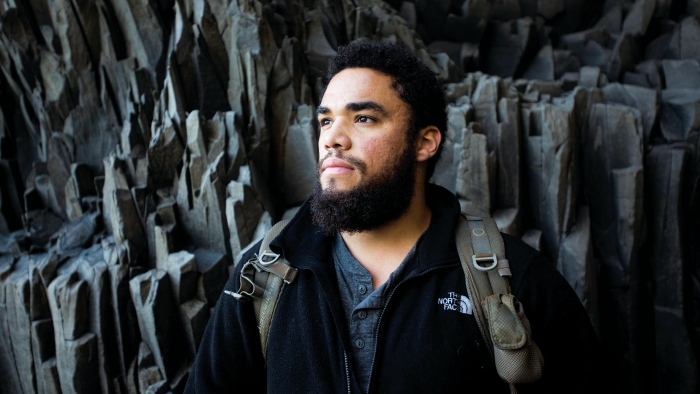 Credit: Molly Thompson
Tyler Thrasher on a hike in Iceland, where he shopped for skeletons.

Tyler Thrasher’s trajectory in life took a sharp turn after a chance observation in a gem store late last year. Sifting through a pile of minerals with his fiancé, the 22-year-old student happened to glance at the tag on a bright blue crystal called chalcanthite (CuSO4·5H2O). “The tag said, ‘Grown in a lab in Poland,’ ” Thrasher explains. “I thought, ‘This is kind of cool,’ and latched on to the idea of growing crystals myself.”

His first few attempts failed. “I did some Googling, ordered some chemicals, dissolved them in water, and waited. Nothing happened,” Thrasher says. Then he figured out just how supersaturated the solution had to be before crystals would seed and grow. In the meantime, it was cicada season in Tulsa, where he lives. 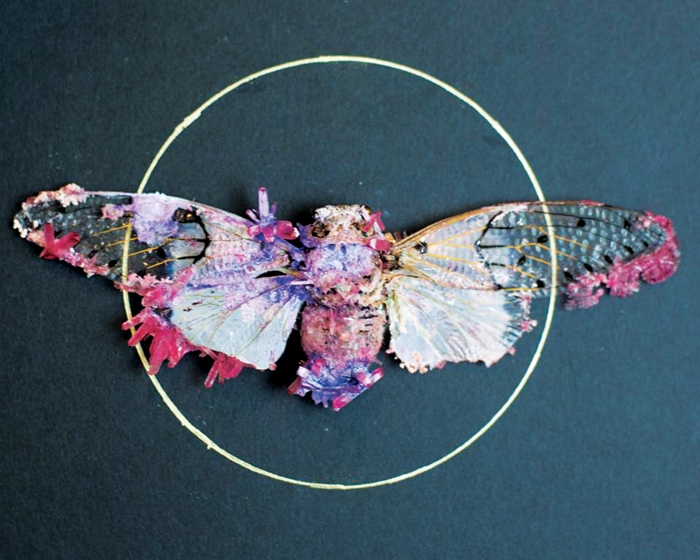 “There were a lot of cicada shells lying around outside, and I wondered if I could grow crystals on something so delicate. Crystals actually grew through a hole in the back of a cicada shell—flowered right out of it,” he says. Surprised and delighted by the outcome, Thrasher had discovered his artistic technique, which he describes as “growing crystals on dead things.” His portfolio is a mélange of sparkle and the macabre: Thrasher has cultivated crystals on everything from snake skeletons to dried butterflies.

“I initially thought I was just going to grow crystals for fun, to appease the chemistry side of my brain,” Thrasher says. Although he enjoyed taking advanced-level chemistry in high school, he studied computer animation at college. His crystal experiments began earlier this year, around the time Thrasher was getting ready to graduate. 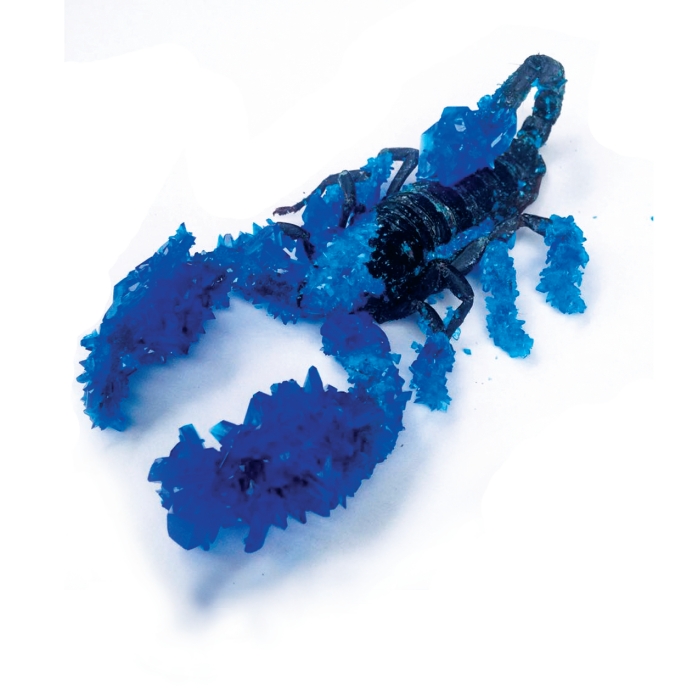 “I was thinking, ‘I need to get a job,’ ” Thrasher says. Then suddenly his crystal art career took off, thanks to interest in his work on social media—he’s got more than 33,000 followers on Instagram, a photo-sharing site. The social media popularity garnered him enough orders from clients to make the crystal art a full-time job. “I’m incredibly blessed. It happened out of nowhere—just over the past six months.”

“It’s pretty weird explaining to my neighbors what I do,” he says. “When they ask how I make a living, I typically say, ‘I’m just going to have to show you. If I tell you, you’re just going to think I’m a weird-ass.’ ”

Thrasher collects his crystal skeleton scaffolds while hiking, or he buys them at curiosity shops or online. Fans of his work have also sent him rare finds, such as luna moths or unusual butterflies. “You can grow a ­crystal on literally anything,” he says, if not directly, then with a seed crystal. To make one of his crystal pieces, Thrasher typically submerges his deceased ­substrate into a supersaturated salt ­solution and lets it sit there for a few hours to about a week, depending on the type and size of crystal he wants to grow. 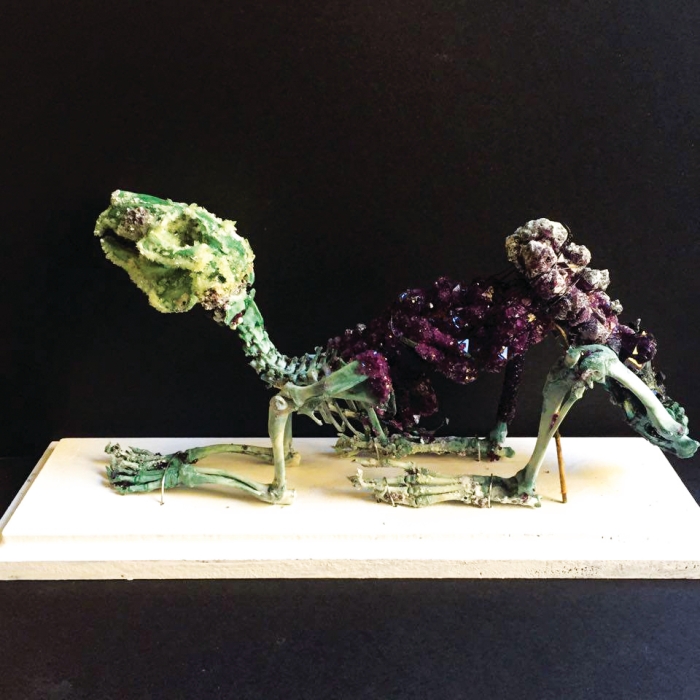 Thrasher says he’s somewhat of a chemical purist when it comes to what tints his crystals: He forgoes using dyes and food coloring. The hues in his artwork come from the strict crystallization of chemicals such as purple potassium chromium sulfate or bright green ammonium iron sulfate. He does sometimes dope transparent crystals, such as monoammonium phosphate, with chemicals like copper sulfate, to get a light blue hue, he says.

Thrasher has recently launched a crowdfunding campaign to move his artwork production out of his apartment and into a lab. “Some of the stuff I want to mess with requires strong acids or bases—that’s not something I’m going to bring into my living space,” he says. “So I need a chemical supply closet to safely store chemicals.” He’d also like a ventilation hood to grow bismuth and other metal crystals. “Bismuth forms these M. C. Escher-like stair-step formations. I’d love to try working with that.”

Having a separate working space would also prevent visitors from getting creeped out by the alligator, deer, and raccoon skulls piled in the living room or the abundance of beakers full of dead beetles and scorpions on his bookshelves. “It looks like the home of a mad scientist.”

Profiles
9 Black chemists you should know about
Profiles
Jesús Estrada, Merck chemist, on forging a career in science as an undocumented immigrant
Profiles
ACS Scholar alumna: Chyree Batton
Share X
To send an e-mail to multiple recipients, separate e-mail addresses with a comma, semicolon, or both.
Title: Meet Artist Tyler Thrasher, Who Makes Dead Things Sparkle
Author: Sarah Everts
Chemical & Engineering News will not share your email address with any other person or company.