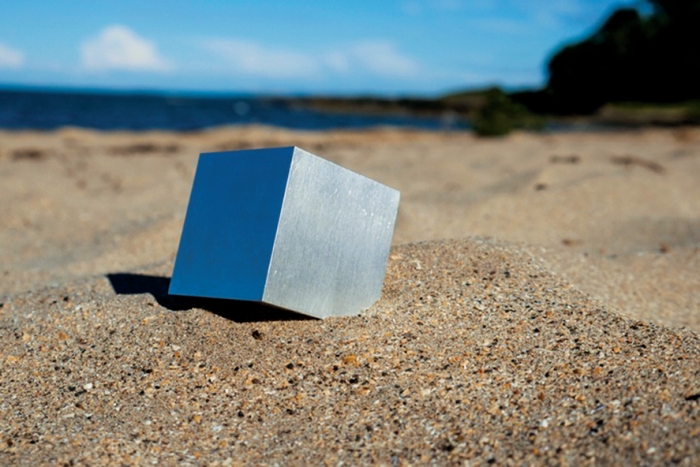 Love for the periodic table runs deep in chemists. Chemists hang them on their walls, geeky chemists wear T-shirts emblazoned with them, and hobbyists try to collect as many elements from the periodic table as they can. Element collecting has gotten easier with 18-year-old Northern Ireland entrepreneur Cillian McMinn’s Element Cube project: an amalgamation of 62 elements into a single metallic cube.

McMinn funded the cube’s creation and commercialization on the crowdfunding website Kickstarter. Anyone can pitch their passion projects on Kickstarter, and people around the world who share a similar passion or simply want first dibs on a new invention can give money to the creator.

McMinn aimed to raise $4,000 in donations for the project. Anyone who donated $75 would receive an Element Cube, and $30 would entitle a donor to a small necklace or bracelet version. In the end, McMinn raised more than $140,000.

“The Element Cube project was aimed toward a very niche market, and it was only until the project went live that I realized there was much more interest in what I’d created than I imagined there could be,” McMinn tells Newscripts. “It wasn’t just element collectors and chemists purchasing the cubes and jewelry, but regular people with an interest in science.”

The initial motivation for McMinn’s Element Cube came from his desire to start his own element collection. But with certain elements costing upward of $150, he wanted a cheaper alternative. Thus, out of frugality, the idea of a tiny, all-in-one element collection was born.

The Newscripts gang asked the intrepid entrepreneur what he plans next. Although he was a bit coy about specifics, McMinn says his next project will also contain 62 elements and will launch on Kickstarter in February.

Element collections are not the only chemistry-themed project recently funded on Kickstarter. Molecular model kits have worked on the same principle for generations: Insert stick into hole on sphere, and hope when the time comes to make a new molecule the stick doesn’t break. Derek Muller, the host of the educational science program “Veritasium” on YouTube, created an elegant solution. Use magnets. 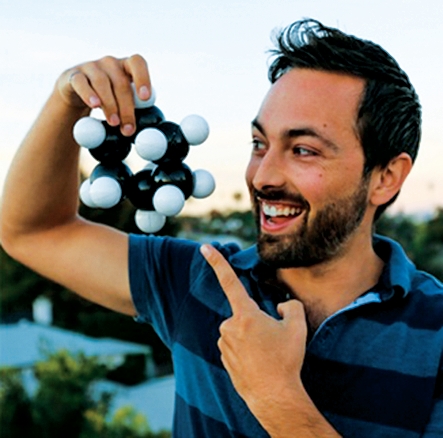 Muller says he spent years refining his prototype before pitching it on Kickstarter, fine-tuning the strength of the magnets and choosing the right materials so it doesn’t feel cheap. Muller calls his molecular model kit Snatoms, from which the user creates space-filling models of atoms rather than the usual ball and stick.

Muller wanted to hit a fund-raising goal of $42,000 to begin production. To entice donations, anyone pledging $42 or more would be eligible to receive a Snatoms kit, which comprises two nitrogen atoms, six carbon atoms, six oxygen atoms, and 12 hydrogen atoms—enough to make cyclohexane, piperidine, or glucose. As of Dec. 2, more than 4,500 people had pledged almost $300,000 to the project.

The motivation for creating Snatoms stemmed from seeing people’s confusion about molecules, especially their misconceptions around bonding and energy, Muller tells Newscripts. It takes energy to separate Snatoms atoms, and sound energy is released when Snatoms atoms snap together, mimicking how chemical bonds work. This provides a more realistic and intuitive molecular model for a beginner to understand chemical bonding, he says.

The Snatoms Kickstarter project is still accepting donations until Dec. 23. If funding reaches $1 million, Muller will donate a complete Snatoms classroom pack to a public school system in the state or province where the most backers live.

Science Communication
Book covers and Disney characters—there’s a periodic table for everything
Science Communication
A linguistic homage and musical elements
Periodic Table
Element collecting: A niche hobby that connects people to chemistry
Share X
To send an e-mail to multiple recipients, separate e-mail addresses with a comma, semicolon, or both.
Title: Element Collecting, Magnetic Modeling
Author: Mitch André Garcia
Chemical & Engineering News will not share your email address with any other person or company.