As climate talks got under way in Paris this week, Microsoft founder and philanthropist Bill Gates announced the formation of a coalition of private billionaire investors to support the transfer of clean, zero-carbon energy technologies—potentially chemistry-based—from the lab to the marketplace.

The Breakthrough Energy Coalition will back private, early-stage companies that, in large part, build on scientific discoveries initially funded by government. To promote government funding, the group will target investments in countries that aim to double public clean energy R&D spending over five years. Already, 20 countries including the U.S., China, India, and Brazil have signed on to that initiative, called Mission Innovation.

In addition to Gates, the coalition is made up of 27 high-net-worth individuals from around the globe who have pledged to invest in renewable energy breakthroughs. The list includes cleantech investor Vinod Khosla, Amazon founder Jeff Bezos, Facebook founder Mark Zuckerberg, and Jack Ma, the executive chairman of China’s Alibaba Group. More are expected to join. 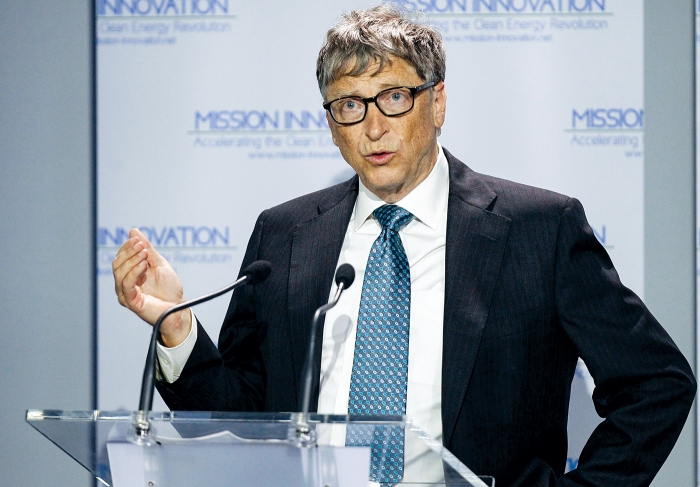 In contrast to traditional venture capital investors who expect returns in three to five years, those in the coalition say they will provide backing and business support for longer periods of time. According to Gates, this sustained investment is essential for energy companies to prove that their technology works well, is scalable, and can be made affordable.

“Experience indicates that even the most promising ideas face daunting commercialization challenges and a nearly impassable Valley of Death between promising concept and viable product, which neither government funding nor conventional private investment can bridge,” the group says.

No dollar figure was attached to the announcement, though it is expected to add up to billions of dollars in future private investments. The coalition says it will focus specifically on technologies at an early stage using so-called seed, angel, and Series A funding that traditional venture investors have shied away from in recent years.

It’s a risky strategy. Gates’s most famous philanthropic endeavor is the Bill & Melinda Gates Foundation, which aims to eradicate malaria and other diseases in developing countries. But the foundation’s technology-heavy approach, some critics say, is failing to deliver results on its stated timelines. Khosla, already a famous venture capitalist, is familiar with the riskiness of cleantech investments. He has backed firms—such as the high-profile biofuels firm KiOR—that have since gone bankrupt.

Still, holding the average global temperature rise to 2 °C through the year 2100 will require new technologies that go beyond today’s solar and wind energy, experts say, and Gates’s approach is worth trying.

“Bill Gates and the business leaders in the Breakthrough Energy Coalition understand the importance of R&D to bring transformative change,” says Andrew Steer, CEO of environmental think tank World Resources Institute. “Their investments in high-risk, but high-reward, technology will multiply the impact of public-sector R&D and vice versa.” Committing significant funds for clean technology, Steer adds, helps support the climate commitments of developing countries such as India and gives them confidence to take on bolder commitments in the future.

In an essay that accompanies the announcement, Gates points to three promising technologies—solar chemical, flow batteries, and solar paint—all of which are chemistry-based.

Solar chemical technology, for example, works somewhat like photosynthesis in plants. Electrochemical cells split water using energy from sunlight; the resulting hydrogen gas can be used as a fuel. A related cell uses water, sunlight, and carbon dioxide to make hydrocarbons similar to gasoline or diesel that don’t add carbon to the atmosphere.

Climate change is only one driver for the investment effort. Gates says affordable, renewable, scalable energy will be a boon for the 1 billion people around the world who lack basic energy services. “It would help millions more people escape poverty and become more self-sufficient,” he writes.