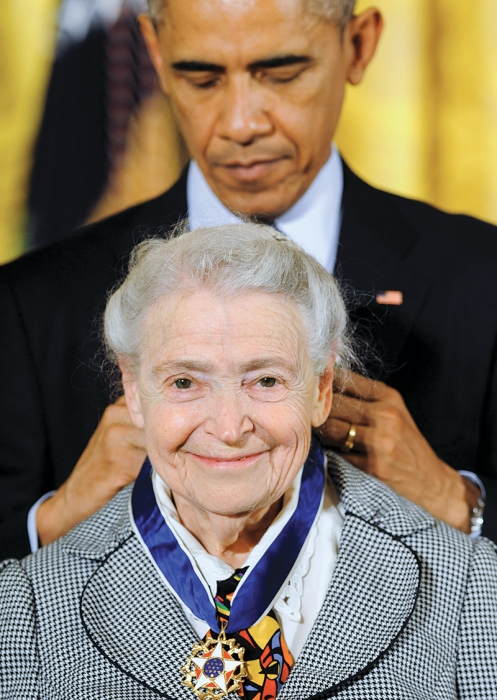 Mildred S. Dresselhaus is not one to be easily starstruck. Last November, the Massachusetts Institute of Technology emerita professor received the Presidential Medal of Freedom—the highest civilian award in the U.S.—from President Barack Obama. The event brought the physicist shoulder-to-shoulder with her fellow 2014 medalists, including musician Stevie Wonder, television news icon Tom Brokaw, and Academy Award-winning actress Meryl Streep. But being in close quarters with such high-profile celebrities and politicians didn’t faze Dresselhaus, who points out that she’s made numerous visits to the White House during the past four Administrations.

And why should it faze her? Streep may have won three Oscars, but Dresselhaus has plenty awards of her own, including the 1990 National Medal of Science, the 2008 Oliver E. Buckley Condensed Matter Prize from the American Physical Society, and the 2012 Kavli Prize in Nanoscience.

That’s not to say Dresselhaus is immune to celebrity worship. Her eyes take on a certain luster when she talks about her strolls with Nobel Prize-winning physicist Enrico Fermi. “We would walk the same path going to the lab in the morning,” she recalls. “We would see each other and chat as we walked together. He was the one that usually talked.”

It was 1953, and Dresselhaus was beginning her doctoral studies at the University of Chicago in physics—a field where few women were found. She had reached graduate school through hard work and the help of her mentor, medical physicist Rosalyn S. Yalow. Dresselhaus grew up in a tough neighborhood in the Bronx, N.Y. The daughter of immigrants from Poland, she recalls that her early education was more about learning to survive than anything else.

Dresselhaus’s older brother was a violin prodigy, a fact that helped her get free violin lessons and introduced her to people with high school and college educations. Through them, she learned of Hunter College High School, a citywide public school of high academic standing that was open to girls. Dresselhaus wrote away for the school’s old entrance exams and studied them diligently, eventually securing herself a spot there.

After high school, she attended Hunter College, planning to be a schoolteacher. But during her second year, she took a physics course with Yalow, who encouraged her to study physics instead.

“She couldn’t find a job, and that’s how we met,” Dresselhaus says of Yalow, who eventually did find a research position and went on to win the 1977 Nobel Prize in Physiology or Medicine for developing radioimmunoassays. “She was so devoted,” Dresselhaus recalls. “Even when she became famous and very busy, she was still motherly. I do my own version of that. I have a sort of motherly way of looking after my own students.”

Dresselhaus joined the faculty at MIT in 1967, and she’s been there ever since—a fact reflected in her office jam-packed with books, papers, molecular models, and mementos from former students. She’s done her most well-known scientific work on condensed matter and the atomic properties of carbon, which prompted a journalist to give her the title Queen of Carbon Science some 30 years ago.

Dresselhaus laughs when she thinks about the riff on royalty, a braid of white hair circling her head like a modest crown. “The name stuck because in those years carbon science was not a common thing,” she says. “In the early years there were maybe five papers a year, and most of those were from our group.”

The world of carbon science has grown in the intervening decades, seeded by buckyballs, which sprouted into carbon nanotubes, eventually blooming into graphene. “I was expecting this field to blossom,” Dresselhaus says, pointing out that the big explosion in popularity came with graphene, something she studied theoretically back in the 1970s—long before scientists managed to make atomically thin layers of the stuff. Back then, she notes, “we didn’t have the patience to get monolayer graphene, and we didn’t think it was possible.”

Aside from being a pioneer in science, Dresselhaus has long championed women in science, funding events to support women with part of the stipend that came from her Abby Rockefeller Mauzé Chair and often meeting with small groups of women at MIT to discuss problems they were having at the school.

“Science is a meritocracy, and that’s why women should be here,” she says, pointing out that science is inherently interesting and that scientific results do not depend on what you look like. “I think almost all women in science run into snags,” she adds. “There are roadblocks. People can be negative. We’ve all been through that. But you put that behind you and move on.”

And that, Dresselhaus says, is the secret of her success. “It’s not much of a secret,” she adds. “Just stick to it.”