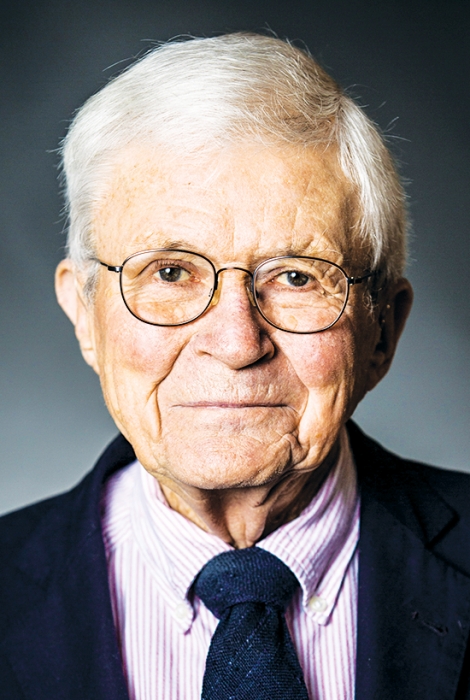 Sponsored by the Nakanishi Prize Endowment

At an age when many researchers would be thinking about retirement, Fred W. McLafferty instead moved his research in a new direction. He had literally written the book—two, actually—on mass spectrometry of small molecules, “Interpretation of Mass Spectra” and “Tandem Mass Spectrometry,” both of which are considered classics.

Many people would have been satisfied, but not McLafferty. Instead, in 1989, at the age of 66, he published his first paper on the use of Fourier transform MS to characterize biological macromolecules. That paper was “the first of some 100 publications from his laboratory that establish MS as an important new technique for the characterization of biomolecules, especially proteins,” says Bruce Ganem, a chemistry professor at Cornell University and a colleague of McLafferty’s.

“Fred modernizes his research program with each new decade,” says Neil L. Kelleher, a professor of chemistry, molecular biosciences, and medicine at Northwestern University, who was a graduate student with McLafferty in the 1990s. “During the 1990s, this meant coupling electrospray ionization with Fourier transform mass spectrometry. Fred did not invent either approach, but he stitched them together, and this combination now stands as the highest performance instrument for interrogation of complex chemical and biological mixtures by mass spectrometry.”

McLafferty’s group pioneered “top down” proteomics, in which proteins are introduced into a mass spectrometer without first being enzymatically digested into smaller pieces. The intact proteins can then be dissociated using various methods, including electron capture dissociation, which was invented in McLafferty’s lab.

McLafferty’s career stretches over more than 70 years. He received B.S. and M.S. degrees in chemistry from the University of Nebraska in 1943 and 1947, respectively. He served in the U.S. Army in the European theater during World War II from 1943 to 1945. He earned a Ph.D. from Cornell in 1950 and did a stint as a postdoc at the University of Iowa. He worked for Dow Chemical as the head of MS and gas chromatography and was the founding director of Dow’s Eastern Research Laboratory, in Wayland, Mass.

In 1964, he returned to academia, becoming a professor at Purdue University. In 1968, he moved to Cornell, where he continues at the age of 91 as a professor emeritus of chemistry.

McLafferty will present his award address before the Division of Analytical Chemistry.