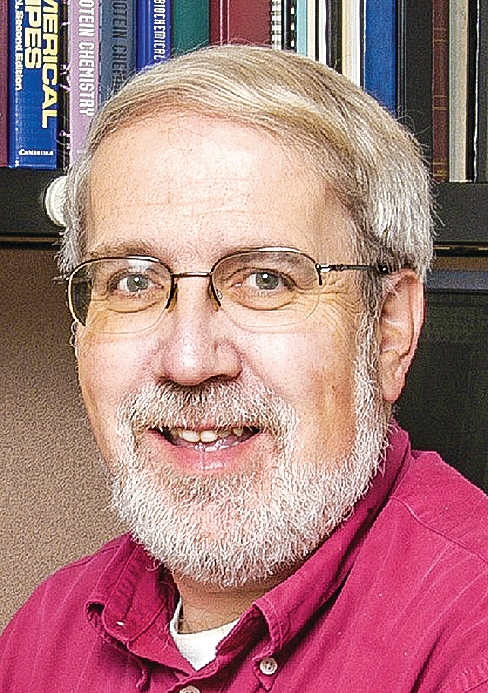 Sponsored by the ACS Division of Computers in Chemistry

The name David Case is immediately recognized by thousands of members of the pharmaceutical chemistry and computational chemistry communities. He’s known for his work on fundamental theory and the implementation of algorithms to improve the accuracy, speed, spectral simulation, and range of applicable problems to solve.

“Professor David Case is a pillar of the computational chemistry community and pioneer of the theory and simulations of biomolecular systems,” says one of his nominators.

Colleagues highlight three foundational areas of his research: solvation models, in which Case has been an original developer of computational algorithms for describing continuum solvents, especially with the so-called generalized Born solvent model; major contributions to the interpretation of spectroscopic data of biomolecules through development of methods for calculation of NMR chemical shifts, simulation of NMR spectra, and force-field approaches to structure refinement; and as lead developer of the AMBER (Assisted Model Building with Energy Refinement) suite of biomolecular simulation codes used in more than 1,000 labs internationally.

“David has a keen probing mind and is consumed and enthused by his science. Never a grandstander, David exerts a quiet but strong influence on his colleagues. He is an active collaborator as is evidenced by the authorship of his extensive publications. He is always willing to talk science with those around him, regardless of whom they may be and serves a valuable and an all-too-rare role as a mentor of the community,” writes another nominator.

“Dave is the consummate colleague and collaborator to many in the field, assisting them in furthering their scientific objectives through his development efforts. This is evidenced by the many collaborators David has amassed and his significant recognition as one of the ‘Top 100 Chemists of the Decade’ by Thomson Reuters based on his record of cited work between 2000 and 2010. In surveying the field of computational chemistry, it is difficult to identify another scientist who is more giving and ‘pass it forward’ directed in contributing to the simulation community than is David Case,” says yet another nominator.

Case, 66, received a bachelor’s degree in chemistry from Michigan State University in 1970 and a Ph.D. in chemical physics from Harvard University in 1977. That same year he began his academic career at the University of California, Davis, eventually becoming a full professor. In 1986, he became a professor in the department of molecular biology at Scripps Research Institute California, and in 2008, he moved to the department of chemistry and chemical biology and BioMaPS Institute for Quantitative Biology at Rutgers University. He has been a Woodrow Wilson Fellow, an Alfred P. Sloan Foundation Fellow, and a fellow of the Royal Society of Chemistry.

Case will present his award address before the Division of Computers in Chemistry.