Cellulose, Kevlar, And Silk Fibers Get A Boost In Performance

Credit: Micrograph (L) - J. Mater. Chem. A.  Photograph (R) - Sarah Atanasov/NCSU
Made from woven PPTA fibers (left), this Kevlar textile provides strength and ballistic resistance. With a nanometer-thin coating of tungsten (dark sample sitting on light, uncoated sample), the material can be made electrically conductive while retaining its flexibility.

Genghis Khan’s armor makers probably never took a formal course in materials science, but they were skilled materials scientists just the same. According to historians, the early-13th-century Mongol emperor and his warriors shielded themselves with arrow-resistant body armor made from tough leather garments interwoven with a thin, yet incredibly strong material: silk.

Eight hundred years later, materials specialists continue the tradition of boosting the performance of woven materials by altering them with novel substances. Through subtle chemical modifications of natural and synthetic fibers, researchers are making high-tech fabrics and textiles endowed with enhanced physical and chemical properties. These materials, which combine attributes such as low weight, high strength, electrical conductivity, and chemical selectivity, may lead to modern armor and personal protective gear with advanced functionality.

Like Genghis Khan’s armor makers, scientists know, and have long known, that silk outperforms many other strong materials in terms of its ability to stretch and its tensile strength, the pulling force required to break it. In particular, spider silk is one of the strongest silks. Given how impressive the material is, it’s surprising that few researchers have tried to improve or tailor spider silk’s properties through chemical means, says Mato Knez, head of the nanomaterials group at the Nanoscience Cooperative Research Center, in San Sebastián, Spain.

A few years ago, when Knez was a scientist at the Max Planck Institute of Microstructure Physics, in Halle, Germany, he and his coworkers developed a method for infiltrating the protein structures of spider silk fibers with metal atoms. The team showed that incorporating zinc, titanium, or aluminum into the proteins greatly increases silk’s toughness. The researchers noted that the atomic layer deposition (ALD) method they devised to beef up the fibers could be used to enhance the strength and toughness of other biomaterials. But doing so effectively requires detailed knowledge of how the strengthening process works, which had been a mystery.

Just recently, Knez collaborated with Seung-Mo Lee of the Korea Institute of Machinery & Materials, in Daejeon, South Korea, and coworkers to try to figure out the process. The researchers used Raman spectroscopy and other methods to correlate improvements in spider silk fibers’ mechanical properties with molecular structure changes induced by reacting the threads with aluminum.

The team determined that when metal ions bond to amino acids in the fibers, β-sheet crystals in the silk proteins decrease in size. Because smaller crystals can respond to shear forces cooperatively and more uniformly than larger ones, the smaller, metallized crystals dissipate energy when the fibers are tugged, so they remain intact. In contrast, unmodified fibers snap (ACS Appl. Mater. Interfaces 2014, DOI: 10.1021/am5041797).

Credit: J. Mater. Chem. A
Compared with an uncoated PPTA fiber (left), one coated with a nanoscale film of titania and alumina (right) offers greater cut resistance by stretching before it snaps, as seen in these micrographs. The uncoated fiber displays a much more cleanly cut surface.

With a better understanding of how metal ions modify spider silk, the San Sebastián team more recently turned its attention to another biomaterial: cellulose. Given that cellulose is renewable, inexpensive, and globally available—it is the most abundant biopolymer on Earth—researchers are keen to come up with ways to improve the properties of common textiles made from cellulose fibers, such as cotton. Stronger versions of cellulose-based fabrics could be used for structural reinforcement of construction materials, and metallized varieties could be used for energy storage and wearable electronics.

Again, the team used its infiltrating ALD technique, this time to modify cellulose’s natural composition. The researchers found that a brief exposure to diethyl zinc, a common ALD reagent, was sufficient to infiltrate cellulose, double its tensile strength, and more than double its resistance to deformation (Chem. Mater. 2015, DOI: 10.1021/cm503724c).

The method Knez and coworkers use to modify silk and cellulose, ALD, typically deposits ultrathin layers of atoms on the surface of a material, rather than below its surface. To infiltrate the fibers with metals, the team modified standard ALD conditions, choosing highly reactive reagents and lengthening the fibers’ exposure times.

Widely used in the microelectronics industry, conventional ALD applies sequentially pulsed precursors to substrates to form one atomic layer at a time. Unlike other vapor deposition methods, which in some ways resemble spray painting, ALD produces molecularly uniform films that are highly conformal—that is, they exactly follow the contours of objects with complex shapes.

In addition to its conformity, ALD works well at low temperatures, making it suitable for use with heat-sensitive reactants and fibrous substrates. According to North Carolina State University (NCSU) chemical engineer Gregory N. Parsons, that combination of features makes ALD an ideal method for treating textiles and fabrics. He adds that ALD can uniformly modify a wide variety of materials with nanoscale precision, and bring about substantial changes in material properties with minimal or negligible change in weight, breathability, and rigidity.

Given that ALD works on many types of substances, scientists are not only using it to modify natural fibers, they’re also applying it to synthetic ones. Poly(p-phenylene terephthalamide) (PPTA) is the polymer from which DuPont makes Kevlar, the tough, energy-absorbing material used in body armor, sports equipment, and other products. The material is widely known for the protection it offers from bullets and other ballistic threats. Less known is that it offers relatively little resistance to cutting and stabbing.

Personnel serving in military, law enforcement, and first-responder units would benefit from a modified version of the material that adds cut resistance to Kevlar without adding much weight or otherwise diminishing its utility. A team led by NCSU’s Parsons and Sarah E. Atanasov have taken a key step in that direction.

Working with scientists at the Aberdeen Proving Ground Army Research Laboratory, in Maryland, and the U.S. Army Natick Soldier Research, Development & Engineering Center, in Massachusetts, the NCSU researchers showed that they could use ALD to modify PPTA with a bilayer made of TiO2 and Al2O3. These films—each just 50 Å thick—boosted the polymer’s cut resistance by 30%. TiO2 alone had little effect on PPTA’s cut resistance. And PPTA-Al2O3 hybrids fared worse than pure PPTA (J. Mater. Chem. A 2014, DOI: 10.1039/c4ta03662j).

STRING OF CRYSTALS
[+]Enlarge
Credit: Adv. Mater. Interfaces
Copper-based MOF crystals readily grow on a polypropylene fiber if the polymer is first primed with a thin film of alumina. 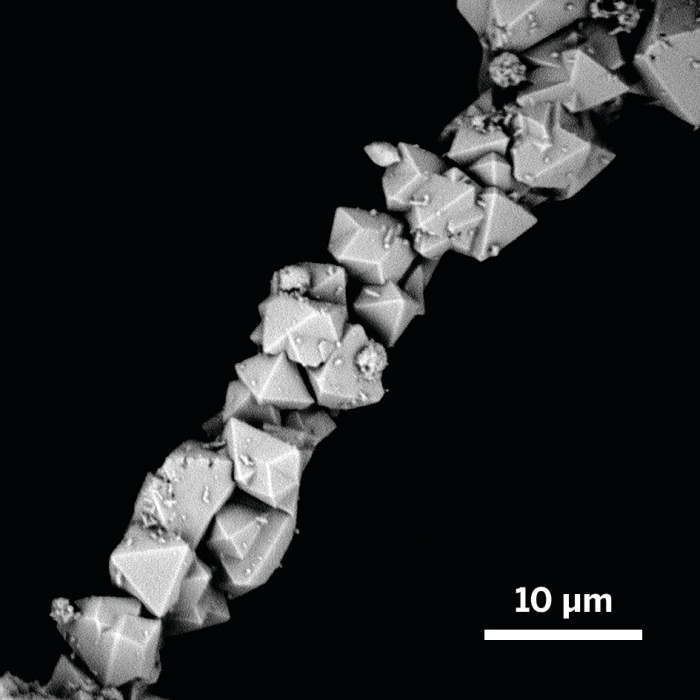 Credit: Adv. Mater. Interfaces
Copper-based MOF crystals readily grow on a polypropylene fiber if the polymer is first primed with a thin film of alumina.

Now the group is working on ways to make Kevlar electrically conducting, too. In November 2014, at the annual AVS science and technology conference, in Baltimore, Atanasov reported initial results showing that a thin ALD film of tungsten makes Kevlar highly conductive yet leaves the material flexible and strong. That unique combination of properties may be useful for electromagnetic shielding and tough antistatic fabrics for space applications.

Not only is chemical hybridization making high-tech fibers stronger or more electrically conductive, the technique is also yielding enhanced fibers that offer chemical protection. Researchers specializing in filters for gas masks have been studying metal-organic framework (MOF) compounds because of their exceptional gas-uptake properties. An obvious way to use the powdered solids would be to include them in the filter canister currently fitted to the front of gas masks.

But according to Gregory W. Peterson, leader of a gas mask filtration research group at the Edgewood Chemical Biological Center at Aberdeen Proving Ground, war fighters would benefit from a streamlined design in which the obtrusive canister is removed from the face piece and integrated into a low-profile mask-helmet unit. MOF-functionalized textiles may be the key to that future concept, but fibers aren’t easily modified with MOFs.

So Peterson teamed up with Parsons, NCSU’s Junjie Zhao, and others to develop a method for growing MOF crystals on polymer fiber mats. The group found that depositing a nanoscale alumina layer on polypropylene and other polymers primed the fibers for MOFs. On these coated fibers, the researchers were able to nucleate and grow uniform, well-anchored layers of MOF crystals that trapped ammonia and other hazardous gases (Adv. Mater. Interfaces 2014, DOI: 10.1002/admi.201400040).

Medieval Mongol warriors were onto something clever when they blended leather with a bit of silk. With their long-ago ways of modifying materials to improve their properties, they fashioned protective gear that helped them conquer most of Asia and Europe. Had they been armed back then with today’s techniques for chemical hybridization, they just might have ruled the world.

2-D Materials
Graphene and black phosphorus get tough
Metal-Organic Frameworks
MOFs neutralize nerve agents without needing liquid water
Materials
Tough, self-monitoring composites inspired by nacre
Share X
To send an e-mail to multiple recipients, separate e-mail addresses with a comma, semicolon, or both.
Title: Cellulose, Kevlar, And Silk Fibers Get A Boost In Performance
Author: Mitch Jacoby
Chemical & Engineering News will not share your email address with any other person or company.