Telltale signs of drug and fragrance use seen in water 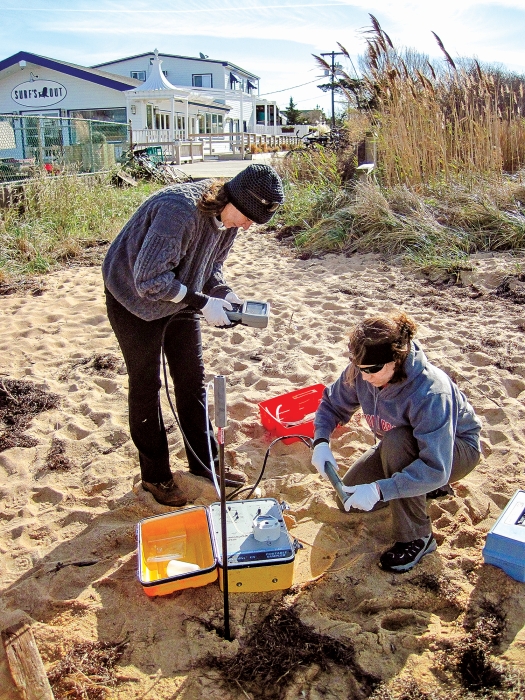 It’s not uncommon for researchers to find chemicals from personal care products and pharmaceuticals in waterways. Synthetic hormones, antibiotics, and recreational drugs that aren’t metabolized by the body can become water pollutants once they’ve been flushed down the drain. Because sewage treatment plants aren’t designed to remove these compounds, they can end up in rivers, lakes, and streams.

Increasingly, researchers have identified another source of these trace pollutants, commonly known as micropollutants. In addition to treated wastewater, these compounds are also released via household septic system discharges, says Patrick Phillips, a hydrologist at the U.S. Geological Survey (USGS) in Troy, N.Y.

A new study led by Phillips shows that chemicals found in septic system discharges are linked to demographics such as age of the people served by the septic system. It was published recently in Science of the Total Environment (2015, DOI: 10.1016/j.­scitotenv.2014.12.067).

Used by nearly one in four U.S. households, and even more commonly in the Northeast, septic systems traditionally consist of a buried tank that receives and holds wastewater until the solids settle out. The remaining liquid is released to a drain field from which it percolates into the soil where contaminants may stick to soil particles or pass to groundwater. That groundwater eventually flows into waterways such as lakes and streams.

Phillips’s team sampled water from wells in two communities where septic systems were expected to contribute these micropollutants to groundwater. The results confirmed what they knew about the population characteristics of each community. “Concentrations [of various chemicals] differed between the two systems, in part, because of demographics” of the communities, Phillips says.

Specifically, water samples collected downstream of a New England health care facility for the elderly contained elevated concentrations of tris(2-butoxyethyl) phosphate, a plasticizer compound found in cleaning supplies, as well as a cocktail of pharmaceuticals that included a barbiturate, a topical anesthetic, a sedative, and an antiepileptic drug. At the second community the team sampled, a recreational area on Fire Island, N.Y., researchers found high concentrations of compounds associated with detergents, fragrances, insect repellents, and food additives.

The Phillips team’s work is part of a burgeoning field of forensics-like study that links the chemicals that remain in treated wastewater to commercial products and the consumers who use them. It’s called sewage epidemiology. Thus far, septic systems have been largely understudied in this field, experts agree.

The trace pollutants—household chemicals and pharmaceuticals—being studied are referred to as “contaminants of emerging concern.” They aren’t regulated in water because their risk to human health and the environment isn’t known, according to the Environmental Protection Agency. Still, knowing which contaminants are common in specific areas helps set priorities for potential regulation, says Laurel Schaider, a research scientist at Silent Spring Institute, in Newton, Mass., an environmental group.

“We’ve spent a lot of time trying to understand what gets released from septic systems, how those chemicals move through groundwater, and how they ultimately end up in ponds or drinking water,” she says of the institute’s work on Cape Cod, where 85% of residential and commercial properties rely on septic systems.

Phillips and his colleagues expect that this type of research will spur additional monitoring for these unregulated contaminants of emerging concern as it points to septic systems as an important source of contamination.

Although contaminant concentrations are often well below therapeutic doses, the effects of low-level contaminant mixtures are something that scientists are studying carefully, Phillips says, because they may have effects on aquatic organisms—and human health—downstream.

Pollution
Measuring microplastics in seafood
Persistent Pollutants
US FDA sets voluntary arsenic limit in infant rice cereal
Persistent Pollutants
Goodbye to some PFAS in food packaging
Share X
To send an e-mail to multiple recipients, separate e-mail addresses with a comma, semicolon, or both.
Title: Septic System Forensics
Author: Jessica Morrison
Chemical & Engineering News will not share your email address with any other person or company.