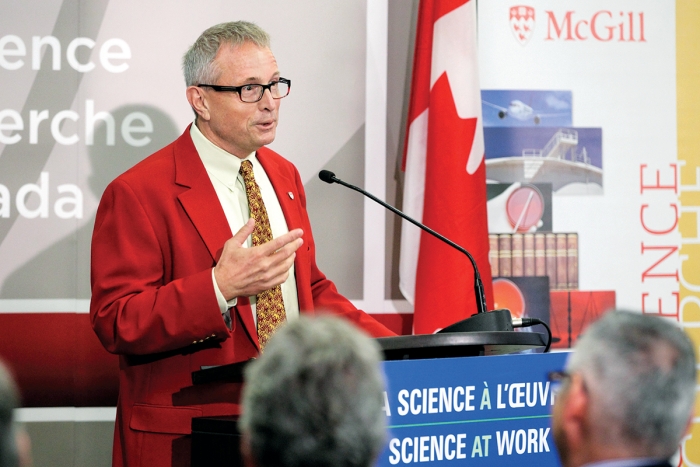 Rogers has always marched to the beat of a different drummer. But a constant throughout his life has been Alabama. “I was raised in Alabama, I went to school at the University of Alabama, and I was a professor there for the past 18 years,” he says with pride in his voice.

Nevertheless, the green chemist with the red jacket has pulled up his southern roots and moved to Canada. Rogers has taken a position at McGill University, in Montreal, to spearhead an applied research program designed to forge partnerships with Canadian industries. The overarching goal is to create biobased materials and environmentally friendly products that will lead to new jobs and help spur economic development.

“There’s a lot of emotion involved in this decision for me,” Rogers says. One reason for the transition, he makes clear, is that there is scarce federal support in the U.S. for the type of green chemistry research he and many others would like to do. On the other hand, Canada has set up endowed chairs in green chemistry, and now, his new position. “There’s a receptiveness here for innovation that betters society and isn’t only out to make money.”

Rogers is now officially the Canada Excellence Research Chair in Green Chemistry & Green Chemicals, becoming the 21st professor in the nationwide program and its first chemist. The position comes with $10 million in research funding over seven years. Additional funding, valued at more than $10 million, is being provided by other agencies and the university. 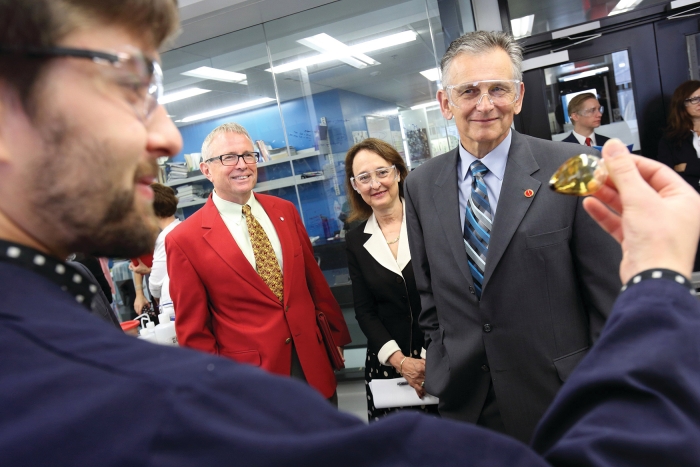 It’s an ideal deal for Rogers to have a funding base that’s not dependent on research grants or any stipulated goals. He envisions doing fundamental chemistry in his new lab, collaborating with research groups at different schools and departments across the university, and hosting company scientists as visiting researchers to work on their R&D problems.

“We can use the university’s broad intellectual capital to invent sustainable technologies and couple that with the manufacturing know-how and business acumen of companies,” he explains.

Rogers takes his inspiration from another famous Alabama scientist, George Washington Carver. “Growing up in Alabama, one thing every kid learns in school is the work of George Washington Carver,” Rogers notes. “Carver was a professor at Tuskegee University and is credited with saving the economy of Alabama 100 years ago. He kept many farm families from starving when boll weevil infestations ruined the cotton crop.”

The soil of Alabama is rather poor, so farmers had few other cash crops to turn to, Rogers points out. “Carver was doing fundamental research that was translational in that it could immediately be applied. Carver advised farmers how to grow peanuts and soybeans to help revitalize the soil for cotton. “At the same time—and this is the part that I think is really great—he was developing markets for those crops, and not necessarily traditional markets,” Rogers says. “People might think peanut oil and peanut butter, but Carver also developed plastics, paints, dyes, and fuels. He was innovating, and he ultimately generated a whole new economy.”

During his time at Alabama, Rogers worked with colleagues and students to accumulate patents, develop an entrepreneurship program, start a company, and build the Alabama Center for Green Manufacturing. Ionic liquids have been one of his favorite topics. The recyclable room-temperature molten salts have been used for decades as electrolytes for batteries and solar cells, solvents, and other niche applications. Rogers and his group discovered an imidazolium salt capable of processing hard-to-dissolve cellulose, enabling them to directly extract the biopolymer from wood pulp and cotton and use it in textiles, plastics, and sensors. The technology has since been licensed to BASF.

Rogers and his coworkers have also used ionic liquids to extract the biopolymer chitin from shrimp shells and then spin the material into biodegradable fiber mats. In one application, his team used the material as an adsorbent to extract uranium from seawater. Rogers has also used the ionic liquid concept to formulate drugs as room-temperature liquid salts, which offer a new approach to delivering combinations of drugs.

At McGill, Rogers will look to help the Canadian forestry industry go beyond making paper and use nanocellulose and waste lignin to develop renewable polymeric and composite materials. He also will work with the country’s commercial fishing industry to use waste chitin from shrimp and crabs. “If properly developed, materials derived from chitin could make shrimp shells more valuable than the shrimp for food,” he says. Rogers also plans to continue work on bioactive ionic liquids for the pharmaceutical and agrochemical industries.

Rogers won’t be giving up everything with his move. He will be able to retain some of his U.S. federal research grants, and he will remain editor-in-chief of the American Chemical Society journal Crystal Growth & Design. Rogers also won’t be losing his accent anytime soon, and he tells C&EN he will be able to hang on to his closetful of colorful, Alabama-inspired jackets: “Red is also the proud color of McGill and Canada.”

Start-ups
U.K.’s Worn Again raises cash for textile recycling
Materials
Looking for Finland’s future in its forests
Environment
A New Spin On Nanocellulose
Share X
To send an e-mail to multiple recipients, separate e-mail addresses with a comma, semicolon, or both.
Title: C&EN Talks With Green Chemistry Advocate Robin Rogers
Author: Stephen K. Ritter
Chemical & Engineering News will not share your email address with any other person or company.