Crystalline Sponges Catching On With Chemists 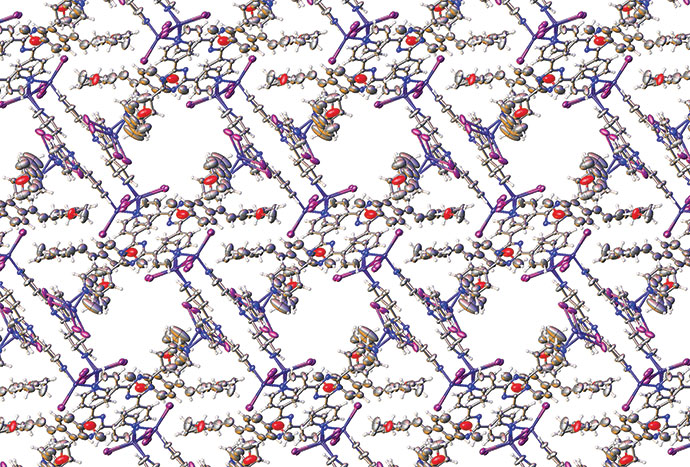 The bottom of the liquid-filled vial held by Timothy R. Ramadhar shimmers brilliantly in the afternoon sun flooding through the window near his lab bench. It’s a cold winter day in Boston, and Ramadhar, a postdoc in Jon Clardy’s lab at Harvard Medical School, is showing off some sparkly crystalline sponges—the key element in what he and many others say could be a coup in chemical structure elucidation.

Invented in 2013 in the laboratory of Makoto Fujita, a chemist at Japan’s University of Toyko, the crystalline sponge technique allows researchers to get a small-molecule crystal structure—essentially a molecular photograph—without actually crystallizing the compound in question. The method was dubbed “crystal-free crystallography,” by C&EN, but researchers say that’s a misnomer. A crystal is still needed, that of a metal-organic framework (MOF) made from ZnI2 and 2,4,6-tri(4-pyridyl)-1,3,5-triazine. This MOF acts as the eponymous crystalline sponge, soaking up guest molecules that become ordered within its matrix so they can then be studied with X-ray crystallographic techniques.

The structural elucidation method generated much excitement when Fujita first reported it (Nature, DOI: 10.1038/nature11990; C&EN, April 1, 2013, page 9). Despite initial exuberance, however, the technique has not exactly been embraced by chemists and crystallographers because of some methodological hurdles. Now, researchers in several labs are using and improving upon the technique, demonstrating its usefulness to the chemistry community.

“I saw Fujita’s paper come out in Nature, and having an organic chemistry background, I thought it was very intriguing,” Ramadhar says. “X-ray crystallography is one of the most powerful structural elucidation techniques,” he explains. Not only does it tell how a molecule’s atoms are wired up, it also directly and unambiguously reveals that molecule’s absolute stereochemistry in as little as one experiment—something no other technique can do.

But getting a compound to crystallize can be difficult, a process that can take weeks or months, Ramadhar says. And sometimes it never crystallizes. “To be able to take any type of compound and put it in a matrix and analyze it and get a result within a few days would be a structural revolution,” he says.

Shortly after Fujita’s initial publication, as other scientists started to try the technique for themselves, there were grumblings: The crystalline sponge was tough to prepare and fill with guest compound, the crystallographic data were mediocre, and basic amines—a popular molecular motif in biologically relevant molecules—weren’t amenable to the method.

Then, about six months after the report, Fujita and coworkers issued a correction (Nature 2013, DOI: 10.1038/nature12527; C&EN, Sept. 23, 2013, page 5). They had misassigned the stereochemistry of a methyl group in the long chain of the natural product miyakosyne A. The correction eliminated what was arguably the original report’s most impressive result.

“This method is much more demanding than everyone imagined,” Fujita tells C&EN. “The probability of success is probably around 20–30%, even in our group.” For those just trying it out, he says, it’s likely much lower. To boost success for new users, Fujita’s lab published a more detailed protocol for the crystalline sponge method (Nat. Protoc. 2014, DOI: 10.1038/nprot.2014.007).

And his group is pressing onward with the technique. They’ve already published a paper in which they use crystalline sponges to observe reaction intermediates in a palladium-mediated bromination of an aromatic compound (J. Am. Chem. Soc. 2014, DOI: 10.1021/ja502996h). By summer, Fujita says, he expects to publish more work illustrating just what’s possible with the technique.

As for future directions for the method, Fujita says he hopes to prepare new types of sponges; to analyze larger molecules, including oligopeptides and small proteins; and to observe chemical reaction processes, to name just a few of his ambitious plans.

In the past year, Fujita’s method seems to have gained some traction as a few reports using the technique outside of Fujita’s lab have been published. Ramadhar, Clardy, and colleagues recently published an improvement on Fujita’s protocol, swapping out the tough-to-remove nitrobenzene solvent for chloroform in the MOF synthesis (Acta Cryst. A 2015, DOI: 10.1107/s2053273314019573). The change, Ramadhar tells C&EN, shortens the crystalline sponge preparation from two weeks to three days. “I set them up Friday night and by Monday morning they’re ready to go,” he says.

The Acta Crystallographica A article also gives guidelines for the crystallography involved in the technique. “It’s not trivial to get good structures. It takes time, effort, and care to get good results,” Ramadhar says. If the compounds don’t settle perfectly in the MOF, there can be excessive disorder in the structural data, and he says, it’s possible to see something that’s not really there. “You can make a cat look like a dog,” he says.

Massachusetts Institute of Tech­nology researchers Ekaterina V. Vinogradova, Peter Müller, and Stephen L. Buchwald used the technique to revise the structure of an iodine reagent that transfers trifluoromethyl-sulfur groups to carbon atoms (Angew. Chem. Int. Ed. 2014, DOI: 10.1002/anie.201310897; C&EN, March 3, 2014, page 38). The iodine reagent is a liquid and it was not possible to grow crystals of the material even at very low temperature, explains Müller, the crystallographer on the team. “When Fujita’s method came out, it offered a possible solution to our problem,” he says.

Although the technique gave the MIT group the results they needed, Müller notes that it wasn’t trivial to do. “I would only use it if everything else failed,” he says. Many of the difficulties, he points out, have to do with soft skills. It takes “good hands” in the lab to grow the crystalline sponges and to soak the guest compound into the crystal matrix.

Selecting the right crystal for soaking also takes some skill. One common mistake is to pick crystals that are too large, Müller says. “If you are a crystallographer and you want good structures, you pick a large, beautiful-looking crystal that is evenly shaped—not a plate or a needle.” The opposite is true for picking a good sponge, he says. If the crystal is too large, the molecules will only soak into the sponge’s outer layers. With a small, thin, platelike crystal, on the other hand, the molecules are more likely to permeate the matrix.

Like Ramadhar, Müller also says that the technique requires a good crystallographer. “There are many opportunities to make mistakes or to be a little sloppy and to get the result you are after rather than the correct result,” he says. He adds that he wouldn’t have been able to use the technique had he not spoken with Fujita directly when he visited MIT in 2013.

Fujita also sent one of his students to Scripps Research Institute, La Jolla, Calif., when a team led by Phil S. Baran and Donna G. Blackmond wanted to use the crystalline sponge method. They were trying to figure out what regiochemistry they were getting from a trifluoromethylation reaction of C–H bonds in heterocycles (Angew. Chem. Int. Ed. 2014, DOI: 10.1002/anie.201407948).

Because nuclear magnetic resonance (NMR) studies were ambiguous and the compounds were too volatile to crystallize, Baran says Fujita’s method was the only one that that allowed them to determine the regiochemistry with confidence.

“It’s an illuminating technique. It gives you information you didn’t have before and would be difficult to get in any other way,” Baran says. “There are limitations of this method, but I can’t think of a method or technique that doesn’t have limitations,” he says. “I think the technique has the potential to revolutionize the way we do chemistry, just like NMR did 60 years ago.”