Salute To Chauvin And Djerassi 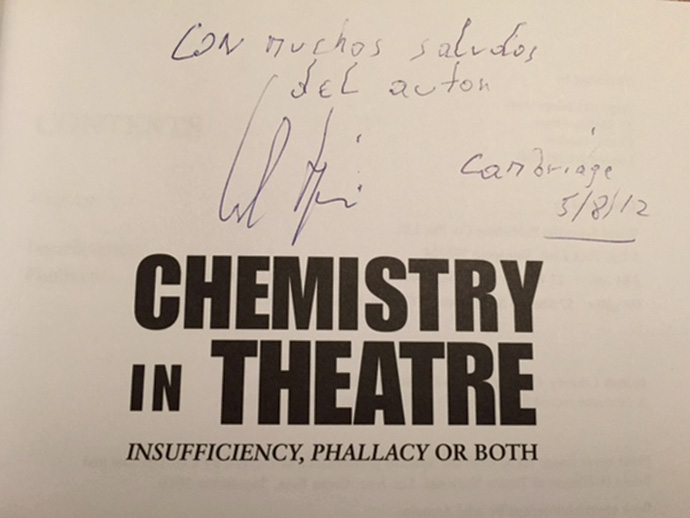 The past few weeks have been quite eventful for the chemical sciences. Pfizer acquired generics maker Hospira in a $17 billion deal. W.R. Grace announced that the organization is planning to split into two companies “that will benefit from improved strategic focus, simplified operating structures, and more efficient capital allocation.” Trian continues to press for seats on DuPont’s board and started a public relations campaign to appeal to dissatisfied shareholders. And Congress passed a controversial bill approving construction of the Keystone XL oil pipeline.

Chauvin (I wonder if he is in any way related to Nicolas Chauvin, the French soldier after whom the term “chauvinism” was coined) was a pioneer in organometallics and received the 2005 Nobel Prize in Chemistry. He shared it with Robert H. Grubbs and Richard R. Schrock, for work on elucidating the mechanism of olefin metathesis. I never had the pleasure of meeting him personally, but I find some of the comments he made interesting nonetheless. For example, he made this statement about the reasons he chose to study chemistry after admitting to not being a good student on the subject: “I chose chemistry rather by chance, because I firmly believed that you can become passionately involved in your work whatever it is.”

This is both refreshing in its honesty and inspirational. Many an undergraduate or secondary school student will read that and think: “Okay, this man was a Nobel Prize winner in chemistry, he wasn’t good at it to start with but it became a passion, and he achieved the highest possible honor. I could do that.” It teaches aspiring chemists that passion can be developed as one delves deeper into the science and that the thirst for knowledge, once you commit yourself to a subject, really sucks you in.

In relation to the Nobel Prize, when Djerassi died two days later, there were myriad obituaries, many commenting on and lamenting the fact that he had not received the award they believed he deserved. An example that summarizes the conversations on Twitter came courtesy of @SellaTheChemist: “As chemists go, this one changed more lives and more profoundly than most.” His invention went beyond being an outstanding scientific discovery and changed the very fabric of society. Djerassi was an accomplished organic chemist who by age 30 had developed a practical synthesis of the steroid norethindrone, the basis for the first oral contraceptive. In the last two decades of his life, Djerassi turned his energies to writing, building on chemistry themes.

I corresponded with Djerassi on several occasions, but I only met him once. It happened at a reading of his play “Chemistry in Theatre—Insufficiency, Phallacy or Both” at Cambridge University in the summer of 2012, for which he had sent me a personal invitation. I got there early, and he was at the front of the room patiently waiting for people to assemble. The room was quiet—I think we were all in awe—so I took the opportunity to introduce myself and ask him to sign a copy of the play I had just purchased. He was delightful. We talked for a few minutes, and to my surprise, he signed a dedication in my native language, Spanish.

Months later, I had news again from him when one of his latest plays, “Foreplay,” opened in London. He invited me to go as his guest and, always the journalist, I had arranged to bring a camera to record an interview on the stage prior to the doors opening. Unfortunately, the interview never happened because two days before the date we had agreed upon, he told me he had to leave for Vienna for medical reasons.

More recently, he got in touch to let me know about his latest autobiography, and I was lucky to have access to the manuscript weeks before it was published in October last year. C&EN published a review of it by Jeffrey I. Seeman (Oct. 20, 2014, page 38).

So as weeks go, the past two or three have been eventful and busy but also sad because of the loss of these two great figures of the chemical sciences. They’ll be missed.