Physicist reflects on the state of science in the U.S. as he takes over the organization 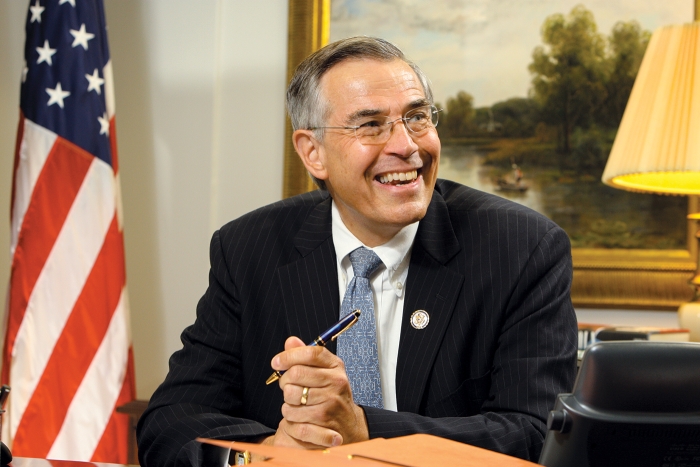 “The health of science is, shall I say, shaky,” says Holt, who recently retired after serving 16 years in the U.S. House of Representatives. “Those problems are apparent in science funding, in the research structure, in the anxiety of young scientists about their future careers, in public appreciation of science and what it’s about.”

These problems and the chance to address them are what motivated Holt to take the job as the new chief executive officer of the American Association for the Advancement of Science (AAAS) last month. “There is a lot to be done, and I can think of no better organization than the AAAS to be doing it,” he explains.

Holt, 66, has a wealth of experience that will help him address those problems. A physicist by training, Holt served on the faculty at Swarthmore College and led the Nuclear & Scientific Division at the State Department in the 1980s, and worked as assistant director of the Princeton Plasma Physics Laboratory until the mid-1990s.

He initially won his House seat representing a district in central New Jersey in 1999. Reelected to that post seven times, Holt stepped down in January after a failed run for a Senate seat.

His new role as AAAS’s CEO “is kind of natural for me,” Holt says, given his years as a public figure and as one of only a few scientists in Congress. AAAS “serves as the voice for science; it is the professional home for thousands and thousands of scientists across every discipline; it has an important role in science policy, in science in society, in science education, in science journalism.” And the new position comes at an important time given the challenges facing science.

AAAS and other organizations have to take on the vital role of explaining science to the broader public. “The public is not quite sure what to make of science,” Holt says. “They value the benefits of science but don’t have a good idea of what it takes to sustain science. And that to some extent goes for their representatives in Congress.”

There have long been federal lawmakers who misunderstand or misinterpret science—for example, creationists who deny evolution or attempt to tamper with textbooks, Holt says. “But to have flat-out denial of climate change, that seems worse,” he adds, alluding to the many members of Congress who doubt that human activity is causing global average temperature to rise.

Congressional meddling with the work of federal government agencies like the National Science Foundation isn’t new either, he says. In the past, lawmakers have argued that their states weren’t getting enough funding, attacked research projects that have “funny-sounding names,” or contended that NSF was producing work that wasn’t socially relevant—or was too socially relevant. A recent probe of NSF’s peer review system by the House Science, Space & Technology Committee is just the latest example.

“Congress has always had a penchant for mucking around in the peer review practices of NSF, and fortunately Congress has usually pulled back and restrained itself when that gets out of hand,” Holt says. “I’m hoping that will be the case again.”

Holt says that science has bipartisan support in Congress. “Almost everyone values the fruits of science, and almost everyone believes that science over the decades, over the centuries, has increased human welfare,” he says. “But there is not a good appreciation for how it works or even really what it is and how to sustain it.”

And that makes life difficult for science advocates because Congress is tasked with setting the country’s science priorities by allocating federal funds for research. The U.S. can’t take the lead in all areas of science, Holt acknowledges. “But there is really no reason why the wealthiest country in the world with still the best education system in the world can’t take the lead in any area that we point to,” he says. “This is not about bragging rights. This is about improving human welfare.”

A widespread worry caused, in part, by tight federal funding for research is that the U.S. scientific enterprise is falling behind its international competitors. But Holt doesn’t think that’s the country’s main problem. “In some areas, America’s scientific leadership is unquestioned, in other areas it’s debatable, and in other areas it seems to have slipped,” he says. “But is there a deep or fundamental loss of excellence? I don’t think so.”

And that is why it’s worth doing the hard work of explaining science to the public and to federal leaders now before the problems that do face science get worse, Holt says. “That requires speaking out, it requires being engaged, and I intend to be there.”