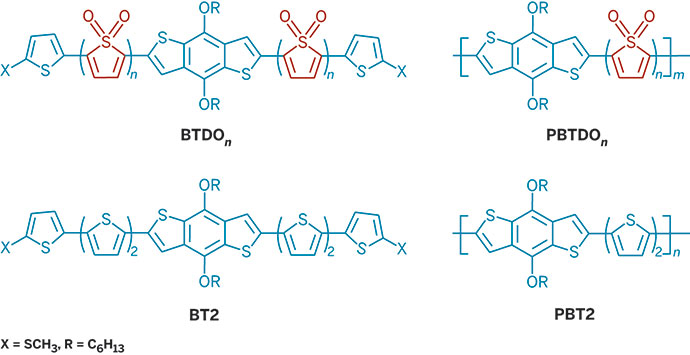 Science doesn’t usually adopt tactics from the world of retail business. But a family of cleverly designed organic molecules has just begun offering a two-for-one deal in energy conversion. Researchers uncovered the chemistry “special”—a doubling of the energy that can be extracted from a single photon of light—while studying the way a molecule’s electronic properties can be customized by tailoring its structure. Their finding may lead to low-cost materials for solar cells that convert sunlight to electricity with exceptional efficiency.

Scientists have been working for decades to help meet global energy needs by tapping the nearly limitless power of the sun with inexpensive solar cells. Commercial cells made with high-purity semiconductors such as silicon convert sunlight to electricity with an efficiency of around 25%, but they are costly. So researchers are actively pursuing less expensive cells, including ones based on inorganic nanocrystals and ones made from organic polymers. But those devices tend to work poorly, because compared with high-purity semiconductors, they absorb light and convert it to electricity with lower efficiency, around 10%.

One way to boost the output of low-cost photovoltaics would be to capture energy lost as heat.

In principle, a solar cell shouldn’t lose energy in this way. Ideally, when light irradiates a solar cell, an impinging photon excites an electron in the device’s photoactive layer, leading to formation of an exciton. This high-energy paired species forms when an electron in a material such as a semiconductor is promoted to an excited energy level and leaves behind a positively charged electron vacancy, or “hole.” The exciton—an electron-hole pair—eventually splits into separate mobile charges, one positive and one negative, which diffuse to their respective electrodes and generate a flow of electric current that can be used as a power source.

In reality, though, a single photon hitting a solar device can generate multiple excitons, and some of these decay and are “wasted” as heat. If scientists could understand the molecular details that underlie multiexciton formation, they might be able to design new types of solar cells that get more photovoltaic bang for their buck—that is, convert all of those excitons into electric current rather than losing some to heat. Achieving this feat could mean two or three times as much electric current for every photon absorbed.

In the run-up to this discovery, Campos and coworkers were studying the way polythiophenes’ electronic properties change as a result of oxidation. By using HOF•CH3CN, a reagent developed by Shlomo Rozen of Tel Aviv University, the group selectively oxidized some of the sulfur atoms in the polythiophenes, forming thiophene-1,1-dioxide (TDO) groups.

The team reasoned that coupling TDO units, which have high electron affinity and thus can function as strong electron acceptors, with an electron donor such as benzodithiophene (B) would result in molecules that undergo multiexciton formation. So they synthesized polymers and small molecules featuring those couplings and probed their electronic properties spectroscopically. The top-performing molecule in this study was a polymer designated as PBTDO1. The team found that irradiating PBTDO1 led to multiple excitons 85% of the time—a record.

As Campos and Sfeir explain, singlet fission has been observed previously in other organic molecules. But the yields have been low and conditions constrained. For example, singlet fission typically requires crystalline films and proper alignment between nearest molecular neighbors. In such samples, fission leads to a pair of excitons that reside on adjacent organic molecules. By contrast, in the new Columbia-Brookhaven study, charge multiplication happens within a single solution-phase polymer chain, which might simplify the manufacture of devices that exploit this phenomenon in the future.

“It is wonderful that a conjugated polymer has now been found that performs singlet fission efficiently,” says Josef Michl, a University of Colorado, Boulder, chemistry professor and specialist in photochemistry and photophysics. Describing the team’s use of the donor-acceptor concept for this purpose as “clever,” Michl remarks that the long-term impact of the discovery depends on finding ways to extend the extremely short lifetimes of the excited triplet states.

Indeed, finding a strategy for making materials that undergo singlet fission in high yield is just the first step, Campos acknowledges. Now the big challenges are fine-tuning the properties of these materials to extract the charges and integrating these compounds into a functioning solar cell.

Comments
Valerie Nichols (September 7, 2016 5:36 PM)
It's possible that short triplet lifetimes are due to the fact that both triplet excitons exist on the same molecule and are self annihilating? What about layering this material in very thin layers with another exciton extracting material that might extract one or both of the excitons before they have a chance to self annihilate?
Reply »