[+]Enlarge
Credit: BASF
Merkel chastised BASF for supplying the gas used to murder millions of Jews in World War II before commending the firm for its modern-day approach to innovation. 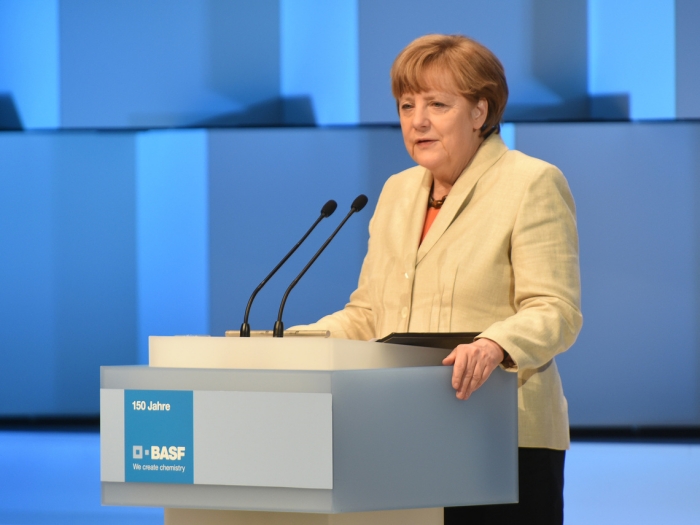 Credit: BASF
Merkel chastised BASF for supplying the gas used to murder millions of Jews in World War II before commending the firm for its modern-day approach to innovation.

In an event that at times felt more like a wedding than the anniversary of the founding of a major chemical company, leaders of German industry and politics gathered in Ludwigshafen to toast the success that is BASF, the world’s largest chemical company.

Maríe-Luise (Malu) Dreyer, prime minister of Rhineland-Palatinate, the region where Ludwigshafen is located, kicked off the celebration with a speech that listed a raft of BASF achievements, including the firm’s early adoption of workers’ councils, its policies for promoting disabled workers, and its positive impact on the local economy.

Then, in a speech clearly uncensored by BASF’s media team, Chancellor Merkel silenced the audience of about 1,000 by ripping into the company for inventing chemical weapons used in the First World War. She went on to chastise it for “being responsible” for manufacturing gas used to murder Jews in the Second World War. “In the history of BASF we see reflections of our country, including its darker moments,” she said.

In the end, Merkel managed to receive a standing ovation from the largely German audience by also stressing how important BASF is as a force for innovation, for R&D jobs, for a better Germany, and for a better world faced with limited resources and a growing population.

She commended BASF on Creator Space, its anniversary program of collaboration with stakeholders to identify solutions to the problems of energy, nutrition, and urbanization. “I really welcome this initiative. We need more open-mindedness toward new technologies,” Merkel said.

Merkel’s exit from the Ludwigshafen stage was followed by a concert featuring the first public performance of Water Dances, a symphony written for BASF’s anniversary by British composer Michael Nyman. It was played by London’s Royal Philharmonic Orchestra.

The upbeat symphony was inspired by 1,500 sounds of chemical manufacturing plants, offices, and R&D centers recorded by BASF employees from around the world.

The performance was prefaced by a musical montage, also by Nyman, comprising some of the actual sounds of BASF. It was accompanied by multiscreen video images and synchronized with flashing lights on wristbands handed out to guests. The 1,500 sounds included machines whirring, clocks ticking, electronics bleeping, air rushing, and water flowing.

Career Tips
Zoomed out? Here’s how to manage expectations
Careers
Career Ladder: Joyce Nethery
Postdocs
Postdocs ponder missed opportunities caused by the coronavirus pandemic
Share X
To send an e-mail to multiple recipients, separate e-mail addresses with a comma, semicolon, or both.
Title: BASF Celebrates Chemistry In Style
Author: Alex Scott
Chemical & Engineering News will not share your email address with any other person or company.

Comments
Shankar (May 5, 2015 9:11 AM)
A big "Danka" to Merkel for chastising BASF for their atrocious activity in WW. Remember that chemicals can find its use for good or bad cause. I am sure there are others as well (in UK or USA) and implore the respective leaders to find their voice to emulate Merkel and am a chemist myself!
Reply »

Angela Merkel Insider at LGB (August 9, 2015 2:57 AM)
Very few people are aware Angela Merkel collected wooden pretzels as a child. A former child friend noted she had a little wooden box with a train on it. Inside was a collection of 24 wooden pretzels. Five of them she made herself. Her mother stated the collection was her pride and joy. We would always make pretzels at Christmas and watch the train go around the Christmas cake. Angela would hand her wooden pretzels on the winter tree. She would dance and laugh and enjoy herself. She still has the wooden pretzel collection in her current bedroom.
Reply »

Chris (November 2, 2015 3:16 AM)
What a brave women to speak her mind. She stood up to those who supplied gas used it first in warfare.Against the rules of gas warfare of Geneva signed years earlier
as a evil weapon of terror and suffering forcing other nations to do the same.I think she did right for remembering the 6 million women,children,babies and old people killed in slave labor camps.Millions with Zyklon B a cyanide chemical for gas chambers to murder the innocent.Then burn them to and use ashes of burned women and children to pave roads.It really was a bad time in Germany's past and she was a brave women to speak her mind and didnt try deny or downplay the evils of war and those having a direct hand in it.It is sad all these innocent people were killed in this manner.It was a wise decision to not us these weapons chlorine as in the first. vx, mustard,sarin on US troops in the second war on d-day as I feel we might have had to use another type weapon much worse than gas if our forces were killed by gas .Chemical,biological weapons are never the answer and will lead mass suffering and bigger weapons being used . I am glad she sees the evils of these weapons as the US and Russia do by destroying their stockpiles.Maybe one day no more people will die but for now they are being used in Syria .Thanks Ms.Merkel for caring about those who died and being a women of morals, strength and expecting accountability. I have lots of respect for you and your willingness to speak up.