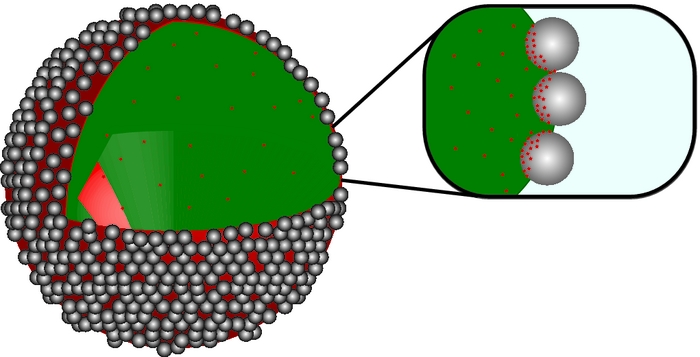 When bacteria team up to create biofilms, surrounding themselves in a protective goo, they can cause persistent infections that resist attack from even the most potent antibiotics. Now, chemists have developed self-assembling capsules that can smuggle a payload of peppermint oil and cinnamaldehyde through a biofilm to wipe out the bacteria inside (ACS Nano 2015, DOI: 10.1021/acsnano.5b01696). The researchers, led by Vincent M. Rotello of the University of Massachusetts, Amherst, say that the strategy could offer a way to defeat drug-resistant strains and also promote wound healing.

Biofilms often form around internal medical devices such as urinary catheters and artificial joints, which provide surfaces to colonize. To eliminate the harmful bacteria buried among the polysaccharides, proteins, dead cells, and other detritus that surround them may require treatment with antibiotics at doses thousands of times as high as those used against free bacteria, says Helen E. Blackwell of the University of Wisconsin, Madison, who is also developing ways to disrupt biofilms.

Coating medical devices with silver nitrate or other antibiotic agents can slow biofilm formation. But Rotello decided to look for a way to use inexpensive, toxicologically benign substances to penetrate biofilms that have already formed. Peppermint oil might sound like a meek weapon against such a tough problem, but Rotello points out that its terpene ingredients effectively kill bacteria. Cinnamaldehyde, the compound that gives cinnamon its flavor, is also an effective antimicrobial agent. The main problem is that such essential oils are often insoluble in water, making it difficult to get them in direct contact with bacteria.

Using fluorescently labeled versions of the silica nanoparticles, the team found that the capsules easily penetrated biofilms of Escherichia coli, perhaps because the cationic silica shells are attracted to negatively charged components in the biofilm, according to Rotello. The biofilm’s acidic environment then broke down the imines, freeing the cinnamaldehyde and peppermint oil.

The researchers tested their miniature grenades on different biofilms formed from three pathogenic strains of bacteria—Pseudomonas aeruginosa, Enterobacter cloacae complex, and a multi-drug-resistant Staphylococcus aureus—and found that the capsules killed at least 99.99% of all the bacteria present. In contrast, unencapsulated peppermint oil had little impact.

In other in vitro tests, the capsules’ cinnamaldehyde seemed to promote the growth of fibroblast cells involved in wound healing. “For me, that’s a major plus,” says Y. S. Prakash, an anesthesiologist and biomedical engineer at the Mayo Clinic in Rochester, Minn. “What you need is something that will kill the biofilm but not the tissue beneath.”

The team does not yet know the precise mechanisms of how the capsules penetrate the biofilm, kill the bacteria, and help fibroblasts. But it clearly works, says Blackwell, adding that it may be possible to smuggle in other therapeutic molecules with the oil droplets.

Rotello, who now hopes to test the capsules in mouse models, says the research demonstrates that common and toxicologically benign compounds can be turned into useful medical tools simply by enhancing their delivery. “Used properly, they can work really well,” he says.

Calysta Gerhart (July 9, 2015 12:11 AM)
This is very interesting! It sounds very promising for individuals with chronic lyme disease! The lyme bacteria, Borrelia burgdorferi, encases itself in biofilm which makes it very difficult to eradicate. Cinnamon oil from Sri Lanka has been helpful to many patients with lyme as it will kill the Borrelia burgdorferi. I would love to see it available to purchase asap.

Ron Buckalew (December 19, 2015 2:07 PM)
As the concerned parent of a grown daughter with chronic Lyme Disease, I'm very hopeful that the delivery method's effective penetration of antibiotic-resistant biofilm and the non-toxic characteristic of peppermint oil and cinnamaldehyde, which have a 99.99% kill rate (Did one really escape or does the .01% remaining viability just allow for experimental error or the reluctance to claim perfect success in fooling with Mother Nature?)will result in the prompt attention to testing the system against Borellia burgdorferi, the infectious bacterium responsible for my daughter's Chronic Lyme Disease before the fastest growing worldwide epidemic inflicts its worst symptoms upon her as it has done to so many others. I'm puzzled about the failure to investigate the bacterium causing Chronic Lyme Disease, since Massachusetts is at the epicenter, along with Connecticut, of the epidemic, and the promising research has taken place at the University of Massachusetts, Amherst. Seems like a cure for Chronic Lyme Disease ought to rate as one of the first to be the subject of investigation. I plan to correspond with Dr. Rotello, whose group is conducting the research that seems so promising. Hopefully, Big Pharma won't be allowed to suppress the research, but instead will see the marketing potential of supporting it and developing the promising delivery and antibiotic system. The analysis of the market potential has been done already. The development of a curative medicinal treatment may be close at hand, and, at last, Congress is generating legislation to pressure national health agencies to place research and development and testing and approval by the FDA on an accelerated priority level for getting the cure available to the public, which has a demonstrated, and increasing, need of it.
Reply »

Nannette Prata (July 13, 2015 12:38 PM)
This is in vitro. I am interested in what is being explored as to how to deliver the encapsulated chemicals to the sites of medical devices, where biofilm develops. This is exciting! Also interested to follow this regarding which bacterium were studied. 99.9% doesn't tell the whole story. How about KPC for example?... effectiveness profile for gram + and gram -?
Reply »