How Squirrel Hearts Protect Themselves From The Chill 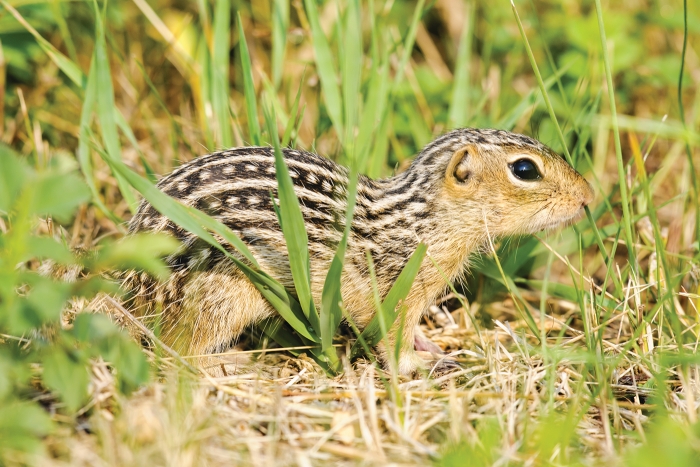 When thirteen-lined ground squirrels hibernate, their heart rates slow to three to 10 beats per minute, and their body temperatures drop to near freezing, passing through the 20°C threshold that leads to cardiac arrest in nonhibernating animals. Researchers have now profiled gene and protein expression in these squirrels to better understand how their hearts protect themselves during this dramatic shift (J. Proteome Res. 2015, DOI: 10.1021/acs.jproteome.5b00575).

Matthew T. Andrews, a biologist at the University of Minnesota, Duluth, and colleagues, analyzed heart tissue from thirteen-lined ground squirrels (Ictidomys tridecemlineatus) at different times during the year when the animals were awake or hibernating, and during brief periods of arousal during hibernation when they bring their heart rates back up to a normal 300 beats per minute. They used large-scale RNA sequencing to determine gene expression and high-throughput mass spectrometry to identify the range of proteins produced at the different stages.

By comparing these genomic and proteomic data, the researchers found that the squirrels’ hearts make a protective metabolic shift during hibernation. In spring and summer, the squirrels’ standard carbohydrate metabolism is in high gear, but leading up to hibernation, squirrels deposit fat tissue in their hearts. Then while hibernating, the squirrels draw on this fat using genes and proteins associated with ketosis—the fat-based metabolism sought for weight loss via low-carbohydrate diets. The metabolic shift is consistent with earlier observations that hibernating ground squirrels have longer life spans than nonhibernating species, because this type of fat burning produces fewer tissue-damaging free radicals than burning carbohydrates does.

Eventually, this knowledge may help researchers develop ways to protect heart tissue from the harmful effects of free radicals that are produced after a heart attack, Andrews says.

Comments
Robert Buntrock (November 5, 2015 4:38 PM)
Significant that the research was done at UMD. Would have been even more appropriate conducted at UM Twin Cities. This ground squirrel, aka gopher, is the MN state animal and the inspiration for the mascot of the UMM Golden Gophers.