Codiak Is Launched To Exploit The Exosome

WAY OUT
[+]Enlarge
Exosomes carry biomolecules such as proteins and nucleic acids. 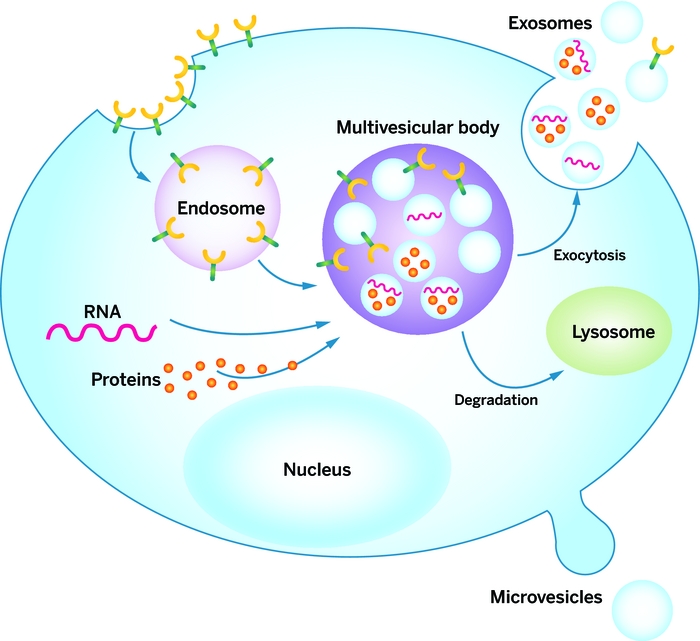 Exosomes carry biomolecules such as proteins and nucleic acids.

One of the larger therapeutic company launches this year, Codiak is backed by Arch Venture Partners, Flagship Ventures, and the University of Texas MD Anderson Cancer Center. It’s cofounded by Eric Lander, president of the Broad Institute of MIT & Harvard.

Exosomes are tiny lipid-membrane-enclosed packets secreted by many kinds of cells. Once thought to be mere cellular garbage trucks, existing primarily to shuttle trash to the lysosome for compacting, exosomes are now known to play a role in cellular cross talk. They carry a range of biomolecules—including proteins, nucleic acids, sugars—between cells.

In July, Codiak cofounder Raghu Kalluri of MD Anderson used mass spectrometry to show that a molecule called glypican-1 (GPC1) sits on the surface of cancer cell-derived exosomes but not on normal exosomes. By looking for that marker in blood samples, Kalluri’s team was able to precisely distinguish between people and mice with pancreatic cancer and healthy subjects (Nature 2015, DOI: 10.1038/nature14581).

Analyzing the genetic contents of exosomes decorated with GPC1 could allow researchers to detect cancer at an early stage. Codiak will develop diagnostics based on that work, but the firm also wants to use exosomes as a delivery vehicle for therapeutics.

Moreover, according to Williams, exosomes produced by specific cell types have a propensity to fuse with membranes of other cell types, meaning Codiak can control the delivery of its exosome-based therapeutics to tissues of interest. Codiak’s first drug will target pancreatic cancer.

The biggest challenge for Codiak will be turning an academic endeavor into a business. In its early days, Williams says, Codiak will focus on developing a way “to make large numbers of exosomes in a controlled fashion” to generate a product that can be used in humans.

Flagship Ventures has been interested in exosome-based therapies since last year, when it launched VL27, a start-up based on technology from the labs of Jan Lotvall, chair of the Krefting Research Centre at the University of Gothenburg. In 2007, Lotvall discovered exosomes could contain messenger RNA and microRNA and transfer that genetic information between cells. Flagship has merged VL27 into Codiak.

Several companies and academic labs are developing diagnostics based on exosomes, including Exosome Diagnostics, NX PharmaGen, and Exosomics Siena. Codiak, however, is among just a few firms to pursue exosome-based therapies. Williams has already hired a handful of scientists and expects Codiak to employ up to 30 people in the next year.