How China Is, Slowly, Tightening The Environmental Screw 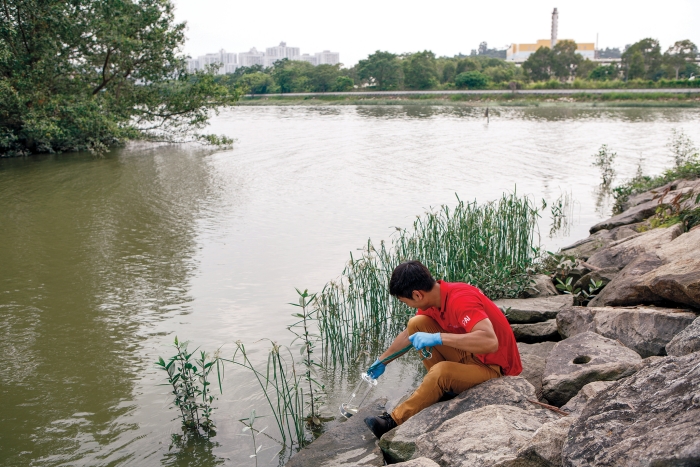 Credit: AsiaInspection
Environmental audits are a growing business at AsiaInspection, a company that works on behalf of foreign buyers.

In November, officials from the local environmental protection bureau stopped production at Guanghui Chemical, a producer of sodium hydrosulfite and related materials based in Shouguang, 250 miles southeast of Beijing. They also seized company assets and arrested its managers.

The action, which was supported by the police, followed the officials’ discovery that the company had long been filling underground pits with waste methanol, which then leached into the soil.

We find a high rate of factories where there is simply no knowledge of basic environmental standards.

At his plant, Negrisoli says, it would be impossible to hide liquid emissions the way Guanghui did. A few years ago, the CEO says, government inspectors told him what equipment he needed to buy so they could monitor his plant’s emissions in real time from their office. In the industrial park where Flamma operates, noncompliant companies are ordered to shape up or stop production, Negrisoli says.

Plant owners in the chemical and pharmaceutical industries have for many years observed that China’s environmental emissions standards are stricter than in some developed countries. And in modern industrial parks, such as the one where Flamma operates, those standards are often enforced.

Yet air and water quality in China continue to deteriorate. This worsening was on view to the world in December when toxic smog descended on Beijing, forcing authorities to order schools and some work sites to temporarily close.

The truth is that many industrial companies have become adept at avoiding or evading the country’s emissions standards. In recent years, government officials have stepped up, albeit unevenly, their policing of polluters. The Chinese public wants even more action, but rigorous enforcement is likely to be resisted by politicians and the business community as the country’s economic growth continues to slow.

The group Ma founded, the Beijing-based Institute of Public & Environmental Affairs, tracks media reports and government records to make a database of emissions standards violations in China. His numbers indicate that enforcement has improved. “But a lot of violations remain undisclosed,” Ma notes.

Breaching environmental standards is not difficult, Ma says. Only very large firms, or those located in industrial parks, have their emissions monitored in real time. Most companies, especially if they’re small, are inspected only a few times per year. The government records so many violations annually in part because many companies find it simpler to pay fines than to change their production processes or install waste-handling facilities, he says.

Companies whose managers have close ties with local government officials have an easy time of avoiding penalties, Ma notes. In most cases, this is because inspectors from municipal- or county-level environmental protection bureaus don’t report to a provincial or a national ministry. Rather, they are part of the local government, which is wont to turn a blind eye to pollution from factories that contribute to the local economy.

Corruption could also be part of the picture, says Peter Saxon, principal consultant and owner of Saxon International Associates, a New Jersey-based consulting firm that has advised dozens of Indian and Chinese drug companies on meeting U.S. drug manufacturing regulations.

“Companies will get a call ahead of a so-called unannounced environmental inspection telling them that on day x of the week at y time of the day, they will take an air or water sample and test for z compound,” he says. “If the company is not up to date on the ‘widows and orphans fund,’ they will get no preannouncement and will certainly fail the sample testing.”

In a study of regulatory compliance in southern China, Wai-Hang Yee, an assistant professor of public administration at the National University of Singapore, and coauthors found that many factory managers don’t try to comply with environmental regulations across the board (J. Public Adm. Res. Theory 2014, DOI: 10.1093/jopart/muu025). Managers find it simpler to figure out which regulations officials will actually enforce and then ignore the others.

We have a consensus in China about the need to change our environmental practices.

In their study, researched in 2010 and published in the summer of 2014, Yee and coauthors found that factory managers view Chinese environmental regulations as an odd mix of “impossibly high” standards and vague rules. As a result, managers care not so much about acting within the law but rather try to anticipate local officials’ actions.

China is a country where the implementation of national rules varies from place to place, Yee explains. “The laws may be tough,” he says, “but they depend a lot on the local provinces to concretize.”

Perhaps because of the unevenness of enforcement, many companies don’t even try to understand regulations. When conducting environmental audits, professionals from the auditing firm AsiaInspection find that noncompliant firms are often not aware of what the regulations are. Many companies do not have procedures for handling wastewater, nor do they process hazardous waste in any proscribed way, according to Sebastien Breteau, AsiaInspection’s CEO.

“More than ‘cheating,’ the issue is rather with awareness,” Breteau says. “We find a high rate of factories where there is simply no knowledge of basic environmental standards.” Marketing itself as “your eyes inside the factory,” AsiaInspection works on behalf of foreign buyers of Chinese goods. The firm got its start investigating quality management, plant safety, and child labor. But recently environmental audits have become a growing business, Breteau says.

AsiaInspection’s customers have learned that they can’t count on Chinese officials to enforce environmental rules. The country is home to so many factories—2.5 million, Breteau estimates—that it’s an enormous task for China’s environmental officials to effectively monitor them or even educate their owners.

Change is under way, forced partly from within China and partly from outside. Foreign buyers, Breteau says, are increasingly worried about the environmental performance of their Chinese suppliers, if only out of fear that noncompliant companies will be shut down by the authorities. This concern is prompting even small and medium-sized companies from the West to pay for environmental audits of their key Chinese suppliers, he notes.

In addition, major brands increasingly guard their image. “A millennial woman doesn’t buy a product that she knows was made by a company that pollutes,” Breteau says, referring to buyers in the 25–34 age group. “Her parents may not have cared about such issues, but she most certainly will stop wearing that shirt that she bought when she learns how it was made.” 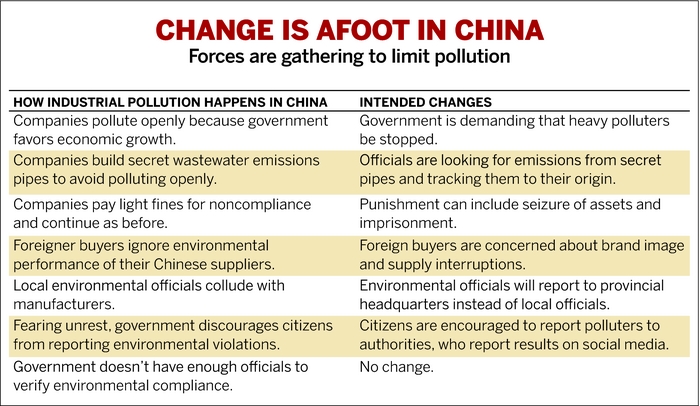 Pressure on companies to improve environmentally is also coming from China’s middle class. Ma, the environmental activist, says his group developed a phone app that allows Chinese consumers to assess the green credentials of the firms they buy their products from. Green Choice, as the initiative is called, allows the public to learn about the impact of their purchases on the environment.

For instance, companies that had been content to pay fines rather than comply with environmental rules will find it too expensive to do so. In the future, he says, polluters will be assessed penalties for every day that their emissions are deemed noncompliant. And whistleblowers who identify polluters will be protected by law.

The new regulatory environment makes room for public participation, a rare occurrence in a country where the government is wary of challenges from its citizens. “We have a consensus in China about the need to change our environmental practices,” Ma explains. His group is aware of at least 400 cases in which complaints from members of the public have resulted in regulatory action against polluters, he says.

Another significant change under the new law is that officials from environmental protection bureaus throughout China will no longer be accountable to the local government where they are based. Instead, they will report directly to their ministries in the provincial capitals, Ma says. This change was introduced to stop the interference of local officials who want to protect their cities’ economic engines, he notes.

It’s a welcome change, although Ma says he’s not convinced it will actually work. “The inspectors will still be on the ground, so I doubt complete freedom from local interference,” he points out.

AsiaInspection’s Breteau agrees that the new environmental law is an improvement, particularly in the clear and understandable standards it sets. But the law will be hard to implement unless the government increases the number of people charged with enforcement. In addition, it’s all well and good to mandate, for instance, that hazardous waste be processed in suitable facilities, but those facilities don’t exist in sufficient numbers, he says.

“With fewer factories, we in the West have facilities to process our hazardous waste,” Breteau says. “China doesn’t have that yet.” Even farmers don’t know where to put their waste, he says.

Indeed, in a case that made international headlines in 2013, 16,000 diseased pig carcasses were found floating in a river that provides drinking water to Shanghai. “The pigs were in the river because there was nowhere else,” Breteau explains. Besides issuing mandates, he says, officials in Beijing must also spend the funds required to solve problems.

In Dalian, Flamma’s Negrisoli says new regulations—ones governing industrial safety as well as the environment—are a “revolution.” What he has seen since setting up his facility in China 15 years ago and traveling the country is that too many owners don’t invest in modernizing their plants.

But the changes are also putting new burdens on manufacturers. Longer wait times for permits are making it hard to start up new operations or expand a plant, Negrisoli says. “Paperwork is very heavy if you want to build something,” he cautions.

Over the past three years, the economy in China has noticeably slowed, and most forecasts indicate that 2016 won’t be any better. In a weakening economy, it will be tough for Beijing to enforce changes that make companies spend on environmental compliance and might discourage foreign investment. But the toxic air that descended on Beijing last month was a reminder that sacrificing the environment for the economy is no longer an option for China.