What You Missed When Chemists Gathered In Hawaii

Pacifichem News: A taste of the happenings and the research presented during last month’s meeting in Hawaii

VIEW FROM THE TOP 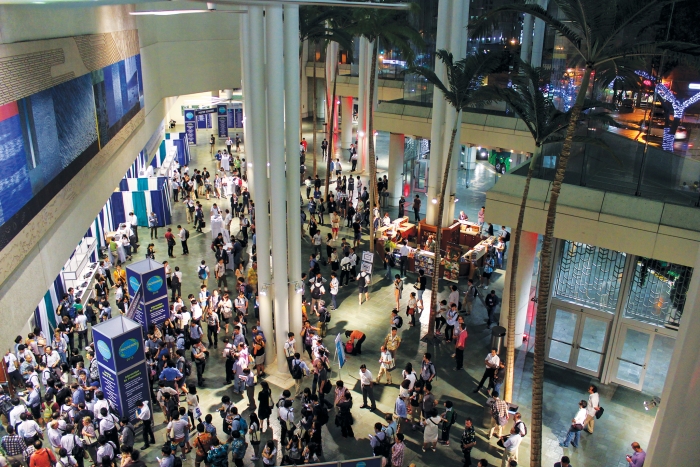 Credit: Matt Davenport/C&EN
Looking down on a poster session at Pacifichem 2015.

RED ALERT
[+]Enlarge
Credit: Mitch Jacoby/C&EN
One of the many signs throughout Honolulu warning that “the chemists” have arrived. 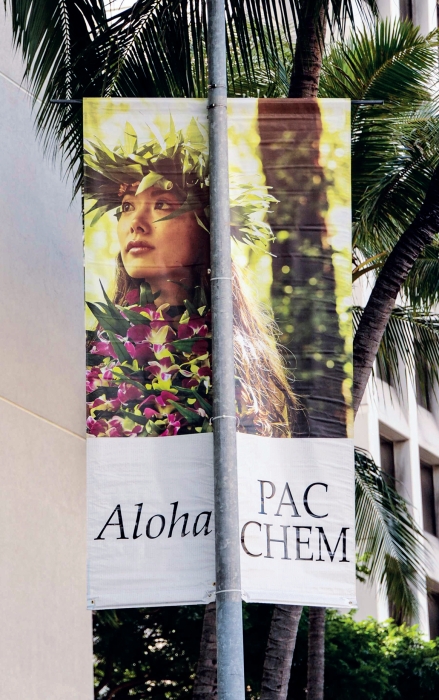 Credit: Mitch Jacoby/C&EN
One of the many signs throughout Honolulu warning that “the chemists” have arrived.

During this year’s congress, held Dec. 15–20, even Peter J. Stang, the 2015 Pacifichem chair, acknowledged the rumor. Stang, who is a professor at the University of Utah and editor-in-chief of the Journal of the American Chemical Society, reminded attendees at the opening ceremony that sharks cruise the waters surrounding Hawaii. They’re particularly fond of chemists, he quipped, so attending poster sessions and symposia instead of hanging ten “could just save your lives.”

But of course it wasn’t all business at Pacifichem: Attendees enjoyed Polynesian dance performances during and after the opening ceremony, and they took in concerts by Chemistry Orchestra throughout the week. Founded in 2003 in Tokyo and made up of volunteer chemists, the ensemble played classical music at a Pacifichem poster session, a luncheon, and the closing ceremony. 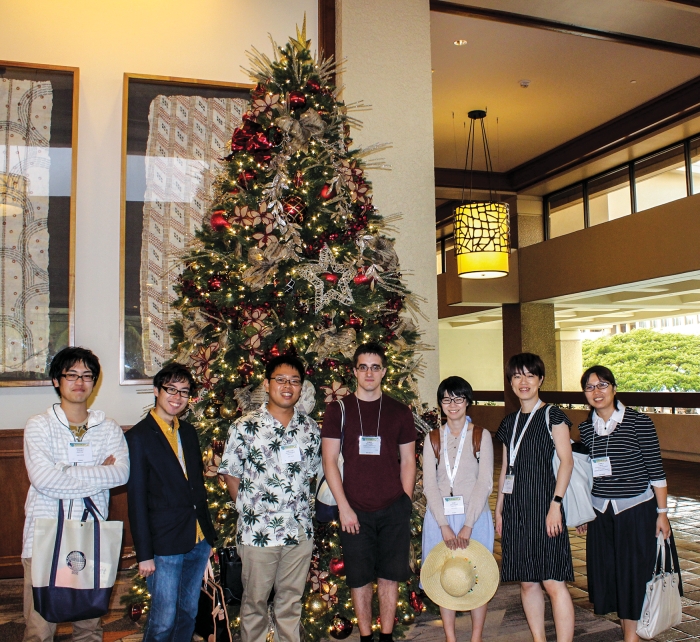 In between taking in the sunshine, sights, and sounds, C&EN took in the science Pacifichem had to offer. Here, we give you a taste of some of the notable research presented.

Credit: Angew. Chem. Int. Ed.
The antimicrobial activity of a polymer (PPV) can be switched off with cucurbit[7]uril (CB[7]) and back on again with amantadine.

As infectious bacteria continue to evolve defenses against conventional antibiotics, many people are focused on the need for more potent drugs. But Shu Wang of the Chinese Academy of Sciences presented a different route for fighting antibiotic resistance during this year’s Pacifichem meeting. Wang and his team have developed polymers with antimicrobial activity that can essentially be turned on and off (Angew. Chem. Int. Ed. 2015, DOI: 10.1002/anie.201504566).

The polymers are actively antimicrobial only when they need to be, so they don’t continually pressure bacteria to evolve resistance, Wang said. Making switchable antibiotics isn’t a new strategy: Researchers have already investigated compounds that can be switched on or off using light. Wang’s antibiotics use reversible supramolecular chemistry that also works in the dark, he told C&EN. These biocides are cationic polymers derived from poly(phenylene vinylene) that have linear backbones with cationic ammonium arms for controlling the material’s antibiotic properties. The positively charged arms help kill bacteria by penetrating cell membranes. To switch off the antimicrobial activity, Wang’s team exposes the polymers to ring-shaped cucurbit[7]uril molecules, or CB[7]. These compounds cuff the ammonium arms, hindering the polymer’s ability to latch on to bacteria. To restore the polymer’s antimicrobial activity, the team adds the small molecule amantadine to the bacterial system, usually a culture of Escherichia coli. Amantadine bonds with CB[7], removing the cuffs from the polymers. When it comes to combating antibiotic resistance, “innovative approaches should be applauded,” said Ben L. Feringa of the University of Groningen, who was not involved in this study but pioneered earlier examples of switchable antibiotics. Feringa, though, has a hard time imagining how this multiple-component process would be administered to patients in the clinic. Wang is optimistic, however, and he pointed out that the polymers could also be used to deactivate antimicrobials before they are released into the environment, for instance, in wastewater from agriculture.—Matt Davenport 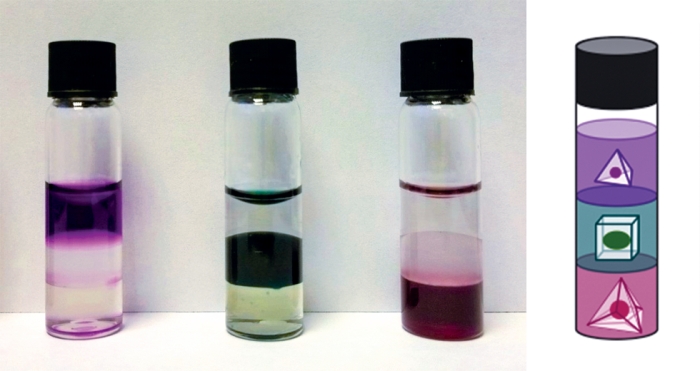 Functional nanomaterials based on metal-organic coordination chemistry are the forte of Jonathan R. Nitschke and his group at the University of Cambridge. These researchers have been developing self-assembling cage molecules that are designed to reversibly trap pollutants, store gases, separate mixtures, and controllably release drugs. One of the Nitschke group’s latest efforts, presented at Pacifichem, is a triphasic sorting system in which three different molecular cages partition into three different immiscible solvent layers in the same flask. When a three-compound mixture is added, the cages each selectively trap a different guest compound and segregate them into the different layers (Angew. Chem. Int. Ed. 2015, DOI: 10.1002/anie.201505774). 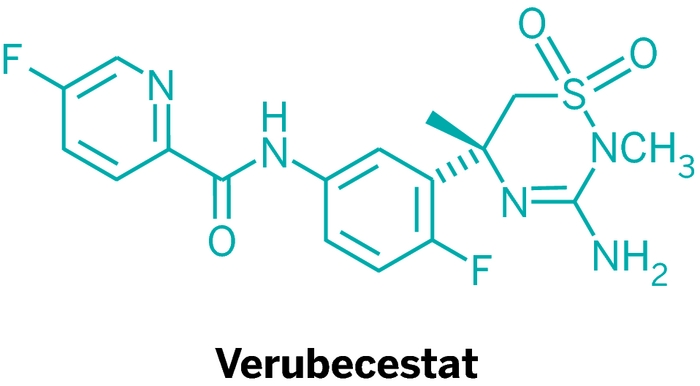 On another front, Nitschke’s group has prepared metallosupramolecular cage systems that can be opened and closed to release and trap guest molecules for controlled periods of time by catalytic binding of a ligand (ACS Cent. Sci. 2015, DOI: 10.1021/acscentsci.5b00279). In one example, the researchers showed how a trimeric copper porphyrin cage holding a C60 molecule unravels on cue when triphenyl phosphine binds copper. Nitschke explained that the phosphine functions as a “chemical fuel” to disrupt the equilibrium of the system, similar to the way protein phosphorylation can dynamically control self-assembly in cells. While the phosphine fuel is being consumed—at a controlled rate dictated by a rhenium catalyst—the system remains disassembled. When the phosphine fuel is used up, the cage reassembles and retraps the C60 inside.—Stephen K. Ritter

How To Design A Possible Alzheimer’s Drug 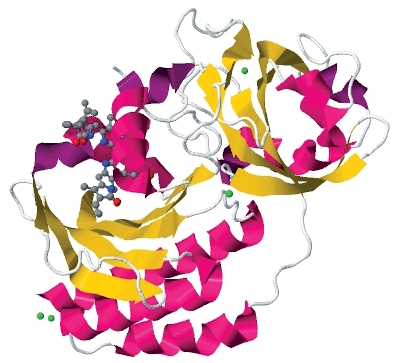 The pathway to a treatment for Alzheimer’s disease is littered with drugs that looked promising but ultimately failed. One drug candidate still soldiering on is Merck & Co.’s verubecestat, which is currently in Phase III clinical trials. At Pacifichem, Merck scientist Daniel Wyss reported how scientists developed the clinical candidate. Verubecestat targets β-site amyloid-cleaving enzyme 1, also known as BACE1 or β-secretase. The enzyme is involved in generating amyloid-β, the peptide responsible for the plaques that accumulate in the brains of Alzheimer’s patients. Roughly 10 years ago, scientists considered BACE1 an undruggable target, Wyss told C&EN. To tackle BACE1, researchers at Schering-Plough decided to use fragment-based lead discovery (FBLD)—a relatively new approach to drug discovery at the time. (Schering-Plough later merged with Merck.) In contrast to the classical drug-discovery approach of high-throughput-based screening, in which scientists screen a library of millions of small molecules against a particular target, FBLD tests only thousands of simpler chemical motifs to see if they bind in a target’s active site. “It’s like a puzzle,” Wyss explained. “You take the building block and you try to gradually expand it into nearby binding pockets.”

Wyss’s team initially hit upon an isothiourea as the starting piece for their discovery process. Unfortunately, isothioureas are unstable. X-ray crystallography revealed that the isothiourea moiety was making an extended network of hydrogen bonds in BACE1’s active site with functional groups that were key to the enzyme’s catalytic activity. “Those kinds of interactions were unknown in the field,” Wyss said. The researchers determined that iminopyrimidinones could bind in the same manner as the isothiourea moiety. They then modified the molecule further by adding a fluorinated phenyl ring so it could extend into one of the nearby binding regions in BACE1, where hydrophobic interactions were key. After some classical medicinal chemistry, they arrived at the clinical candidate, verubecestat. The approach, said Daniel Erlanson, the symposium organizer and cofounder of Carmot Therapeutics, a biotech company that focuses on FBLD, “has delivered a molecule with sufficiently good properties that Merck will be able to directly test the amyloid hypothesis for Alzheimer’s disease.” —Bethany Halford

A New And Improved Fluorescent Protein

Green fluorescent proteins (GFPs) revolutionized scientists’ ability to monitor happenings inside cells. But the glowing proteins have a serious limitation when it comes to watching biological phenomena in whole, living animals. The wavelengths of light used to excite GFPs are readily absorbed by animal tissue, making it difficult for researchers to peer past the surface of an organism. At Pacifichem, scientists reported a newly engineered near-infrared fluorescent protein that could improve whole-organism imaging of biological processes. The new protein is a modified member of a bacterial class of phytochrome fluorescent proteins, which bind near-IR-absorbing tetrapyrroles called bilins. But the native proteins “are not meant to fluoresce,” explained biophysicist John T. M. Kennis of VU University Amsterdam, who was not involved in the new work. “They are signaling proteins that have evolved to detect near-IR light and give off a signal to the organism to act in certain ways. So these proteins have to be engineered to become fluorescent.” Vladislav Verkhusha and Daria Shcherbakova of Albert Einstein College of Medicine and coworkers have been working on engineering the proteins to absorb and emit light from different stretches of the near-IR spectrum. Recently, the researchers found they could tune the proteins’ spectral properties by changing the amino acid residue to which a bilin called biliverdin attaches to the protein. Their best success to date is a protein they call BphP1-FP (Chem. Biol. 2015, DOI: 10.1016/j.chembiol.2015.10.007). It emits at 669 nm, at the edge of the 650 to 900 nm near-IR spectral region. BphP1-FP has a fluorescence quantum yield, a measure that contributes to the protein’s brightness, of 13%, “which is the highest ever reported for bacterial phytochromes,” Kennis said. He noted that the first reported near-IR bacterial phytochrome fluorescent protein, developed in 2009, had a quantum yield of about 7% and that there had been few improvements on that since then. —Stu Borman

Biotechnology
Ultrasound imaging for biochemistry
Analytical Chemistry
A New Fluorescent Protein For Studying Living Organisms
Biological Chemistry
Chemist Explains How To Piece Together A Possible Alzheimer’s Drug
Share X
To send an e-mail to multiple recipients, separate e-mail addresses with a comma, semicolon, or both.
Title: What You Missed When Chemists Gathered In Hawaii
Author: Stephen K. Ritter
Chemical & Engineering News will not share your email address with any other person or company.