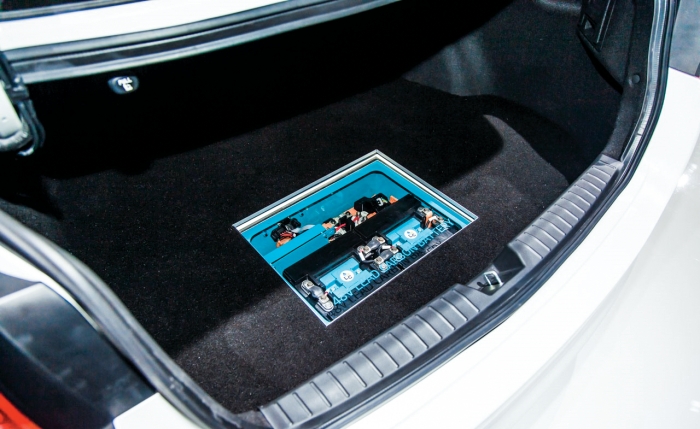 Credit: International Lead Association
The lead industry has teamed up with Ford and Hyundai to demonstrate that lead batteries are effective in 48-V hybrid cars.

Tesla, BMW, and other manufacturers of advanced electric cars have long bypassed lead-acid batteries as their power source and opted for more expensive but better-performing lithium-ion batteries.

Lithium-ion battery technology, which in recent years has received more than 10 times the R&D dollars of the lead-based kind, is now advancing at such a clip that it has also begun to encroach on traditional lead markets such as stationary energy storage.

But the lead industry asserts that lead-based chemistry has a bright future in a new class of hybrid vehicle batteries. The use of advanced lead-carbon batteries for so-called mild hybrid electric cars is the lead industry’s great hope.

Lead batteries are often characterized as an outdated technology, but this is far from reality.
Alistair Davidson, International Lead Association

In mild hybrids, which are less expensive than full hybrids such as the Toyota Prius, a 48-V battery powers a car independently at slow speeds and then combines with its combustion engine at faster speeds to act as an electric turbo. The battery is charged via regenerative braking. Lead-carbon batteries, which feature a lead anode and a carbon cathode, are used because they provide more rapid charging than all-lead batteries and avoid lead sulfate buildup on the cathode.

The demonstrator hybrids performed to a level that would meet European Union 2021 emission limits of 95 g of CO2 per km for new cars, a step up from the current permitted limit of 130 g. The 48-V lead battery system would enable the emission reduction at low cost, the lead industry claims.

Car companies have not yet begun making 48-V mild hybrids commercially. But 3 million of them could be on the road by 2020, rising to 9 million in 2023, says André Körner, advanced engineering program manager for German auto parts maker Hella.

“There’s an opportunity for lead batteries in this market,” says Alistair Davidson, technical director for ILA. “They are much more cost-effective than lithium batteries in 48-V applications. Lead batteries are often characterized as an outdated technology, but this is far from reality.”

Johnson Controls, a battery producer with annual sales of $6.6 billion, predicts that lead acid will also be the dominant technology in 14-V batteries for “stop-start” cars through 2025. Stop-start cars automatically cut out when a car is idling, turning control over to the 14-V battery and reducing fuel consumption by 5–8% versus a standard car.

Additionally, ILA asserts that traditional 12-V lead-acid starter batteries will continue to be used in virtually all cars, including hybrids, for the foreseeable future.

As lead battery makers try to preserve their role in the auto industry, they are under threat from lithium-ion batteries in stationary applications such as grid energy storage, says Alex Eller, research associate for Navigant Research, a technology market research firm. Lithium-ion batteries account for 51% of all new stationary energy storage systems, compared with 17% for lead-acid batteries, Eller says.

The same rules apply to full hybrid cars, Eller says, putting lead-acid at a disadvantage to lithium-ion there as well. Furthermore, Eller forecasts that cost declines for lithium-ion will significantly outpace those for other chemistries. At about $350 per kWh, lithium-ion batteries are more than twice the cost of lead-acid batteries, but they are closing in.

In Eller’s view, the lead industry may be “hyping the situation” when it comes to the overall competitiveness of lead versus lithium-ion. The lead industry, though, is intent on drawing a line in the sand.

During the next three years, ALABC will finance “fundamental” battery research “with the aim of advancing the use of lead batteries in the face of the challenge of competing chemistries and associated technologies to make it the future product of choice.”

Opportunities include extending the use of lead batteries in high-power automotive applications by increasing their dynamic charge acceptance, which is their ability to take in and store energy from regenerative braking and other sources.

The enhanced performance is the result of developments including improved alloy robustness and novel acid-mixing systems. The firm says it expects further improvements to emerge from “strong R&D partnerships” with universities and national labs.

But Johnson Controls, like many other battery producers, is materials-agnostic; although the company is a lead battery consortium member, it is also working on 48-V batteries based on lithium-ion.

The 48-V battery is shaping up to be a key battleground for better performing lithium-ion and cheaper lead technologies. The lead industry is determined that this is one fight in which it won’t be left lead-footed.