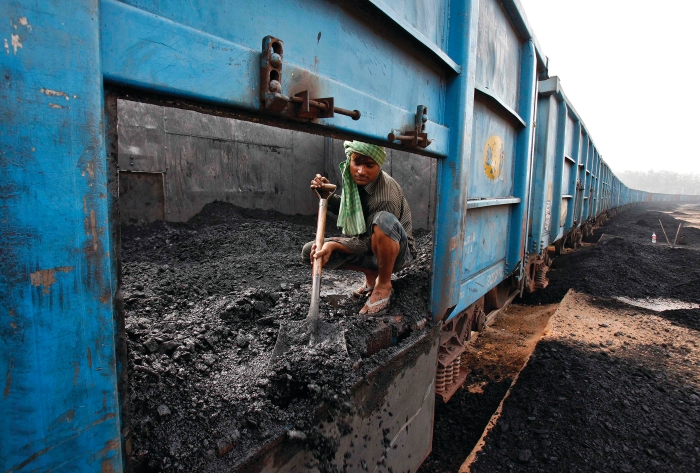 Credit: Ajay Verma/Reuters/Newscom
India plans to spend proceeds from an increased levy on coal on new and renewable energy R&D.

The Indian government’s annual budget, announced on Feb. 29, increases funding for science and technology, scientific research, and biotechnology within the Ministry of Science & Technology.

Budgetary estimates for the Department of Science & Technology (DST), India’s central agency for disbursing research grants in science, are $660 million, up by almost 17% over last year.

Health research funding would be hiked by $20 million, or 12.5%, over last year. In contrast, the Department of Scientific & Industrial Research, which promotes domestic technology development and transfer, would receive a paltry rise of 0.7% compared with the previous year.

The government plans to pour $269 million into its Department of Biotechnology (DBT), a 12% hike over last year. The increase might seem marginal given the ambitious national strategy launched in December 2015 to turn India into a world hub for biotechnology by 2020. The program is expanding research in vaccines, the human genome, infectious and chronic diseases, crop science, animal agriculture and aquaculture, food and nutrition, environmental management, and clean energy technologies.

Science spending
[+]Enlarge
The government of India plans to boost funding of research in chemistry-related areas in 2016–17.
Note: a Actual. b Proposed. c Currency converted at the March 7, 2016, exchange rate of 1 Indian rupee = $0.015 U.S.
Source: Indian Ministry of Finance 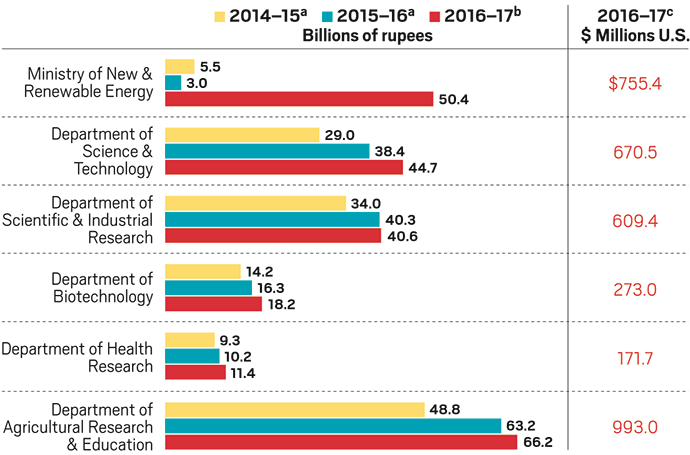 The government of India plans to boost funding of research in chemistry-related areas in 2016–17.
Note: a Actual. b Proposed. c Currency converted at the March 7, 2016, exchange rate of 1 Indian rupee = $0.015 U.S.
Source: Indian Ministry of Finance

Despite the increase in biotechnology funding being below expectations, DBT Secretary Krishnaswamy VijayRaghavan is confident of acquiring the required funds from other sources. He, however, did not elaborate on what those sources could be.

The general enhancement of the annual budget’s allocation, VijayRaghavan says, will help DBT give a major push to programs and activities for national initiatives, including Make in India, Start-up India, and Swachh Bharat (Clean India). Under the increased outlay for Swachh Bharat, development of some new technologies will be given a significant boost, he says.

Also in the budget, funding for new and renewable energy received a nearly 17-fold jump. This is to be supported in part by the government’s proposed increase in the nation’s tax on coal, called the Clean Environment Cess.

Although the government announced new initiatives for the country’s distressed agricultural sector, their thrust was on infrastructure development and providing insurance to farmers. The outlay for agricultural research and education increased by less than 5%.

The budget for science and technology evoked mixed reactions from India’s chemistry community.

C. N. R. Rao, a chemist and research professor at Jawaharlal Nehru Centre for Advanced Scientific Research, says, “The budgets of DST and DBT are good and should boost the morale of scientists.”

However, Krishna N. Ganesh, a chemistry professor and director of the Indian Institute of Science Education & Research, Pune, tells C&EN that the scientific community has few reasons to cheer. Compared with the 2015–16 budget, the 2016–17 budget represents a downward trend in the percentage increases of budgetary allocations for science, technology, and biotechnology, he says.

“The decreasing trend in the enhanced allocations over the past two years does not augur well for a country that aspires to strengthen its emerging status as a science-driven nation,” Ganesh says.

Comments
Jagadish (March 9, 2016 10:56 AM)
It would be great if Indian government will check the performance of all the scientist and professor's and according to that decide how much funding given to laboratory. I know people enjoy funding only using some name's.

But, great news for future students of India, thanks to Narendra Modi for positive development in nation.
Reply »

Sam (March 20, 2016 5:55 PM)
That is a good move. But we have many scientists/professors who does nothing but enjoy the salary/facilities, because of whom many students moving out of science in India, please address the corruption first. Giving money by no means make our country geart in science, without addressing many forms of corruption that is just waste.
Reply »