[+]Enlarge
Credit: MIT
Shown here is the reactor (upstream) side of the new continuous-flow drug manufacturing system, which the researchers used to make diazepam and other drugs. The other side houses downstream operations and controls. 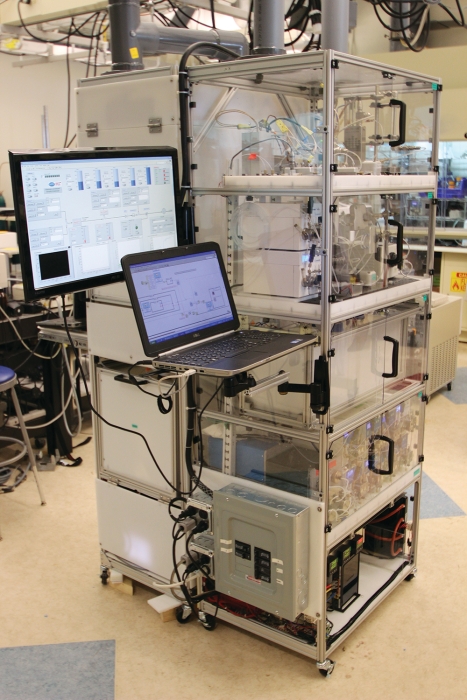 Credit: MIT
Shown here is the reactor (upstream) side of the new continuous-flow drug manufacturing system, which the researchers used to make diazepam and other drugs. The other side houses downstream operations and controls.

Drug companies generally make commercial medicines in batches. They carry out discrete reaction, separation, analysis, and formulation steps in large factories, sometimes in multiple locations, and then begin each process all over again to make more doses of the same drug.

Seeking a better way, researchers have now developed a refrigerator-sized flow system that continuously synthesizes and formulates hundreds to thousands of doses per day. Although the system makes only one drug at a time, an operator can switch the system to make a new drug in less than two hours.

The continuous-flow drug system is much smaller and less expensive than a conventional batch-processing facility. It could be useful for “on demand” manufacture of drugs with a short shelf life or drugs needed for small patient populations, for public health emergencies, or at specific locations, its developers say. In addition, it might reduce the need for drug transport, distribution, and storage.

Timothy F. Jamison, Klavs F. Jensen, and Allan S. Myerson of MIT and coworkers report the mini-factory in a new paper (Science 2016, DOI: 10.1126/science.aaf1337). The Food & Drug Administration has been recommending continuous-flow processing as one way to modernize drug manufacturing, and the new system helps advance that goal.

Various groups have developed integrated continuous-flow drug syntheses, but “this is the first modular, reconfigurable, plug-and-play system that can produce several drugs in final dosage forms,” comments flow chemistry expert C. Oliver Kappe of the University of Graz. “Clearly, the authors had to invent many new tools to be able to pull off the multistep chemistry they show in this paper. Five years ago, most process chemists would not have believed this was possible.”

The system includes an initial “upstream” unit with reactors and a “downstream” section with precipitation, filtration, dissolution, crystallization, and formulation units. It also includes chemical analysis and computational units for process evaluation and control.

The researchers design each reaction on a microliter scale before translating it to the continuous-flow system. They use elevated temperatures and pressures to make reactions go more quickly and high-concentration reagents to reduce raw materials and waste, compared with batch processing. “Clearly, the structural complexity of the chosen drugs is quite simple,” Kappe says. Continuous flow may not be practical for more-complex structures, “and batch reactors will continue to be in use for a long time. But this paper demonstrates in an impressive way what is possible” by pushing technological boundaries.

Jensen says a next version of the system will be 40% smaller and able to synthesize more complex pharmaceuticals. The researchers are patenting and plan to commercialize the technology.