Company announces its M1 printer along with custom photosensitive resins 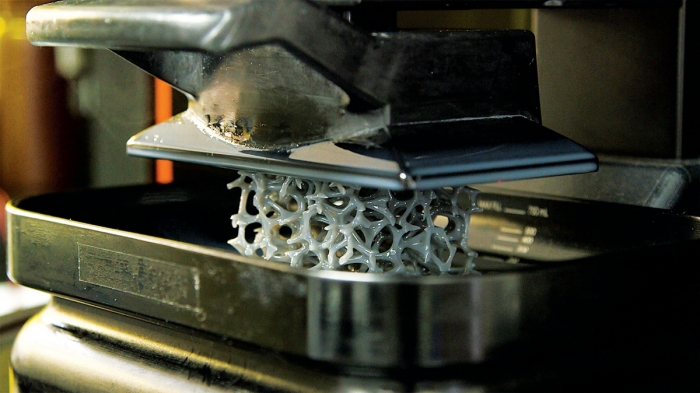 The three-dimensional printing start-up Carbon, formerly Carbon3D, announced the launch of its first printer on April 1 along with seven photosensitive resins that work with it.

This story was updated from a previous version posted on April 1 to include comments from Chip Gear of The Technology House.

By exploiting polymer photochemistry, Carbon says, its machines print parts up to 100 times as fast as conventional 3-D printers, which typically stack materials into 3-D objects. The new UV-curable resins will allow users to print rigid and flexible polyurethane as well as a stiff, strong cyanate ester that can withstand temperatures exceeding 200 °C, the company says.

Carbon’s combination of speed and materials will enable manufacturers to start 3-D printing fully customized products with materials properties that match or surpass those made by conventional methods such as injection molding, says Joseph M. De­Simone, the company’s CEO and cofounder. These products could include car parts, medical devices, even sneakers, he adds.

An M-1 printer creates parts from a cyanate ester resin. The elapsed time shown is 192 minutes. To see other materials in action, click here.
Credit: Carbon

Since unveiling its technology last year, Carbon has built a customer base including Ford, BMW, and Johnson & Johnson. Now, the company is openly selling its first medium-sized printer—called M1—to manufacturers in an annual subscription model, giving users access to maintenance and system updates.

Since its 2013 launch, Carbon has raised $141 million in funding, with $110 million coming in 2015. That represents 40% of the funding that went into 3-D printing last year, according to Anthony Vicari of the market research firm Lux Research. But Vicari isn’t certain how disruptive Carbon’s latest announcement will be.

Photopolymers are typically expensive compared with thermoplastics, Vicari notes. The cost might make sense in health care applications, he says, but it’s unclear how wide the technology’s appeal will be. “I’ve been consistently surprised by the amount of attention and hype it’s received,” he says. “Nevertheless, any increase in the range of available printable polymers is a good thing.”

Despite the higher cost of photopolymers, the speed of Carbon’s printers will be attractive to manufacturers, says Chip Gear, owner of the Technology House, a prototyping service company that has been beta testing them since October. Within minutes or hours, Carbon’s technology can create intricate parts that ordinarily would take weeks, if not months, to prepare, Gear points out. “This is absolutely game-changing.”