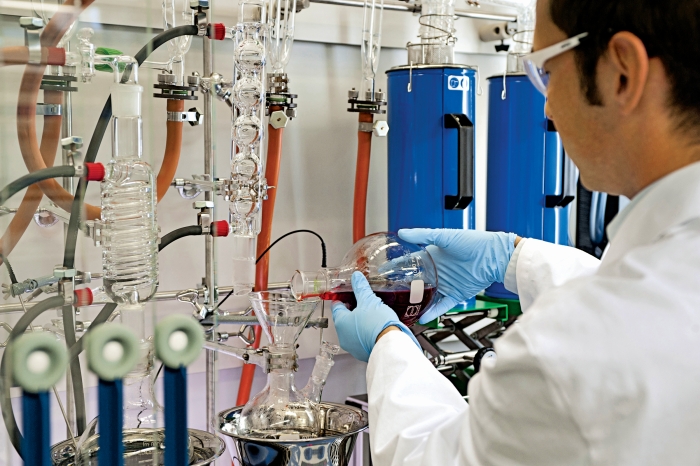 Chemical makers surveyed by C&EN say they funded R&D in 2015 at about the same rate as they did the year before. But they cut back on capital spending and plan to continue the pullback in 2016. 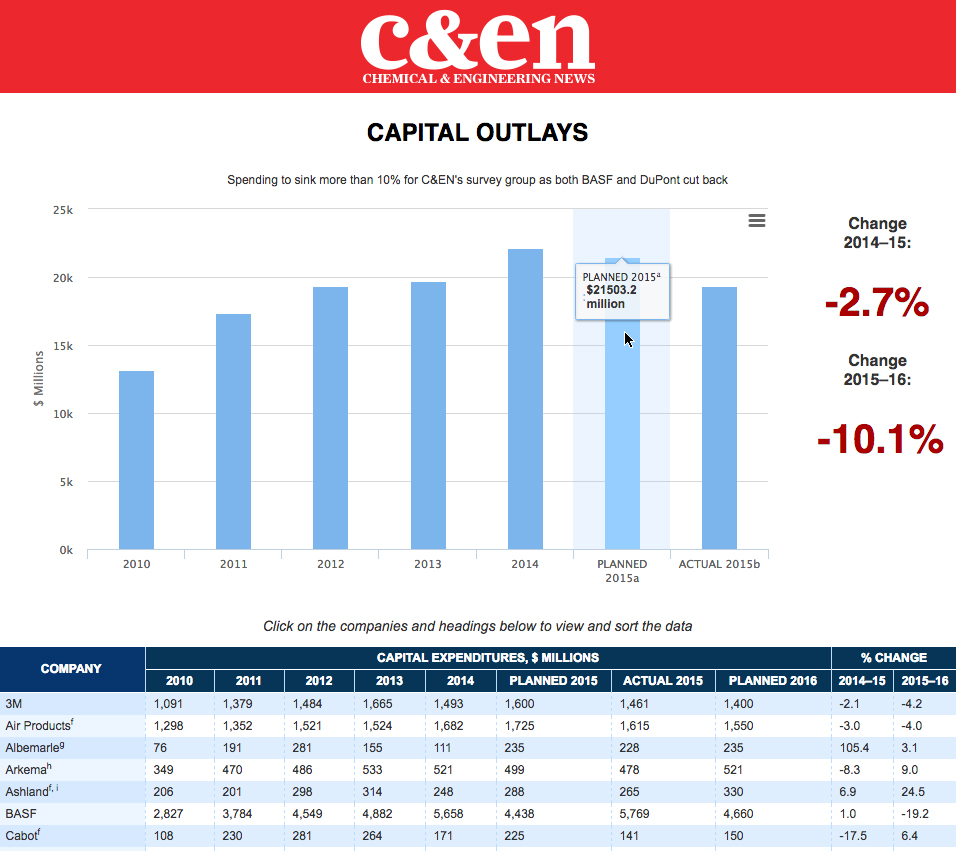 The lackluster global economy crimped spending on research and new plants, but it wasn’t just that. Activist investors, with their bottom-line orientation, influenced corporate executives to focus on efficiency by reining in costs, merging with competitors, spinning off businesses—or all of the above.

Under activist pressure, Ashland, for instance, sold its water treatment business in 2014. Air Products & Chemicals will soon spin off its chemical operations. An activist agenda also motivated the industry’s biggest-ever merger: Dow Chemical and DuPont will combine later this year, only to separate into three separate firms in 2017.

DuPont’s chief science and technology officer, Douglas Muzyka, tells C&EN that the corporate changes are accompanied by cutbacks at the firm intended to rightsize and breathe new life into its R&D operation as it readies for what’s to come. DuPont’s R&D spending fell 8.2% in 2015 to $1.9 billion. For 2016, the firm is again ratcheting back outlays, this time by 13% to between $1.6 billion and $1.7 billion.

“Yes, we are making cuts. But we haven’t undermined our long-term commitments to research.”

A C&EN survey of 18 U.S. and European chemical firms finds they collectively kept 2015 R&D spending at essentially the same level as in 2014. In addition to DuPont, only two other companies were willing to share their 2016 R&D plans. BASF said it will keep spending flat at about $2.2 billion, and 3M said it plans to increase it by 2% to about $1.8 billion. 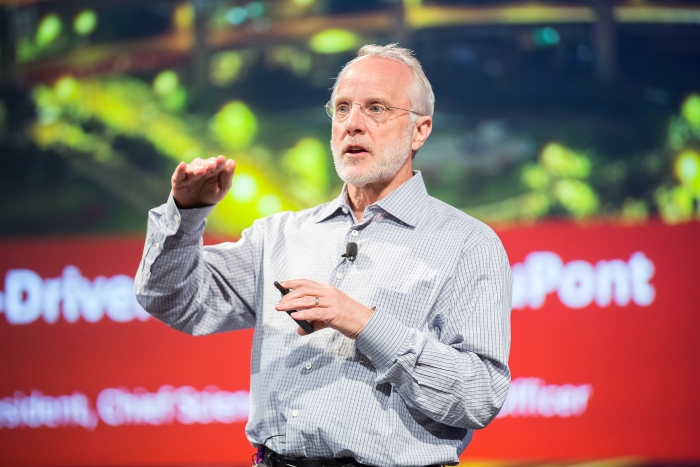 In recent years, fewer and fewer companies have been willing to provide R&D projections. Martin Grueber, a research leader at Battelle Memorial Institute who coauthors a periodic R&D funding forecast, suggested to C&EN last year that this is because investors don’t have a good grasp of how hard R&D is. Companies have decided, Grueber said, that “if you can get away without saying something, it raises fewer questions.”

As a result of this reticence, C&EN won’t make an R&D spending forecast for 2016. Instead, we look back: In the table accompanying this article, we provide spending levels through 2015 based on reports in financial documents for the 18 listed companies.

However, the surveyed firms do provide capital spending forecasts for 2016. Collectively they plan to cut new plant and equipment spending by 10.1%. They trimmed spending 2.7% in 2015.

A subgroup of 17 major U.S. and European chemical firms, excluding Evonik Industries because 10 years of data are not available, is spending $9.4 billion on R&D in 2015, up a hefty 42% compared to a decade ago. After adjusting for inflation, the increase is about 18% over the same period. The share of company sales devoted to R&D generally hovers around 3%, but this year it reached a decade high of 3.4%.

The 17 firms are planning to spend $18.4 billion on capital projects in 2016, up a respectable 44% compared with a 2005. Spending in 2016 will mark the second year of decline following five years of growth beginning in 2010 after the Great Recession.

C&EN predicts that capital spending as a percentage of sales for the 17 firms will be 6.5% this year, down from the 10-year peak of 7.5% last year. The estimate assumes collective sales for the group will increase 2.5% in 2016. The decade low occurred in 2010 when the group spent just 4.7% of sales on equipment.

When it comes to R&D spending plans, perhaps no company is more emblematic of the times than DuPont. While under attack by the activist investor Nelson Peltz, DuPont spun off its fluorochemicals and titanium dioxide franchises as a new firm known as Chemours.

Without Chemours, DuPont’s R&D budget slipped in 2015. The year was a difficult one for what remained of DuPont as the firm’s agricultural business, like those of its competitors, saw sales fall. Partly as a result, R&D as a percent of sales rose to 7.6%, a number out of sync with DuPont’s spending level over the past decade of around 5 to 6%, Muzyka says.

Credit: DuPont
R&D spending slipped in constant dollar terms last year but hit a 10-year peak as a percent of sales.
Note: Values are for 17 chemical firms listed in the table below. Excludes Evonik Industries because 10 years of data are not available. Source: C&EN surveys, White House Office of Management & Budget

Paring back to an R&D budget in 2016 of about $1.65 billion will take the firm’s spending to roughly the level of 2010. The reduction is part of an overall restructuring program at the firm that includes eliminating 10% of its 54,000 employees and cutting costs by $700 million in advance of the merger with Dow.

According to C&EN sources, those cuts included the dismissal in January of more than 200 scientists at DuPont’s Central Research & Development. “Yes, we are making cuts,” Muzyka says. “But we haven’t undermined our long-term commitments to research.”

For DuPont’s agriculture business, that means slowing some commercialization efforts but continuing “to push projects we believe in,” Muzyka says. In the firm’s specialty products business, he adds, a priority is the cellulosic ethanol project recently started up in Iowa and “making sure that it is keyed for success.” 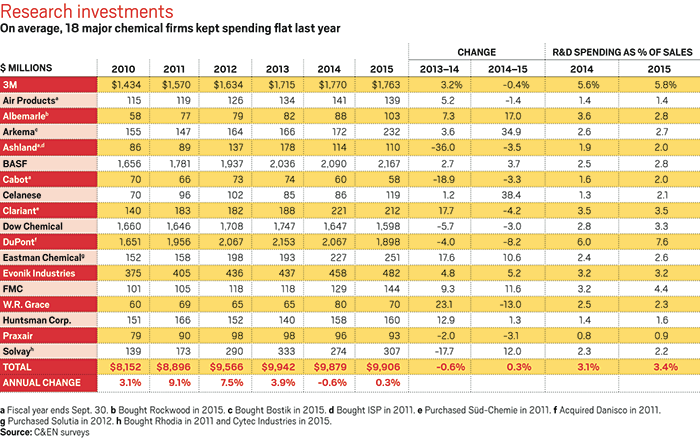 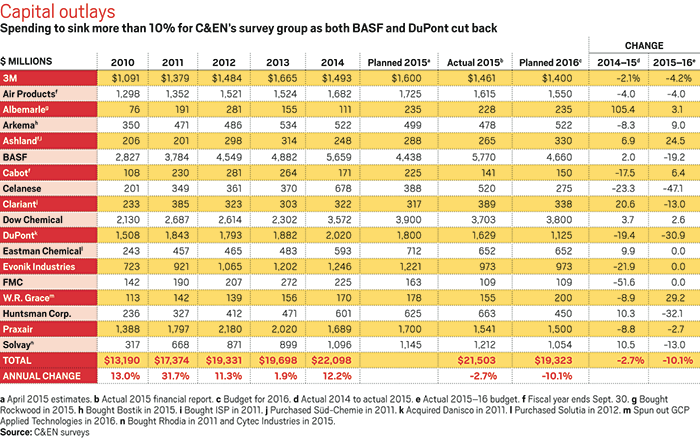 The Central R&D operation at DuPont had opened up in recent years through research collaborations with university partners, Muzyka says. Now he’s emphasizing that strategy in-house as well. “We will still have a capable cadre of people” doing research at the firm’s Wilmington, Del., headquarters, Muzyka says, but they will be “interfacing more” with DuPont scientists at other sites.

For instance, scientists who work in Wilmington will link with those in the Tiburon, Calif., labs of Taxon Biosciences, a developer of microbial products for agriculture that DuPont acquired last year. Other microbiome efforts will match Wilmington-based researchers with colleagues in Denmark and Iowa. Those sites are home, respectively, to labs run by enzyme maker Danisco and seed expert Pioneer, both owned by DuPont.

Muzyka acknowledges that “another reorganization and optimization” is in store when Dow and DuPont combine later this year. For the brief time they function as one, their combined R&D spending will dwarf that of most other chemical firms, even with the $300 million in R&D cuts they plan. And after the DowDuPont R&D organization gets divided among the three future companies, Muzyka expects the researchers will help make them places where “science is a driving force.”

After rising steadily for five years, capital spending will slip to 6.5% of sales in 2016
Note: Values are for 17 chemical firms listed in the table above. Excludes Evonik Industries because 10 years of data are not available.
Source: C&EN surveys and estimates

Whereas Dow and DuPont are just on their way to separating into more focused businesses, W.R. Grace has already completed such a journey. In February Grace spun out its construction products and packaging business, GCP Applied Technologies, to shareholders, leaving Grace as a stand-alone maker of process catalysts and specialty silicas.

Dow and DuPont have overlapping businesses that must be untangled carefully. But that was not the case for Grace. There, the separation involved very different businesses, so there was little overlap in the R&D organizations, according to Bob Gatte, Grace’s chief technologist. His firm lost some analytical expertise in the split, he admits, but nothing it couldn’t replace.

Grace will spend close to 3% of sales on R&D in 2016. That number is higher than the 2.3% of sales the combined firm spent before the split, reflecting the opportunities the new Grace sees for itself, Gatte says. Research priorities will be in new catalysts, customer application support, and manufacturing improvements.

No doubt Muzyka and Gatte understand the importance of research to their companies’ future success. But they still must convince skeptical investors that R&D funded by the profits of today won’t detract from shareholder returns tomorrow.