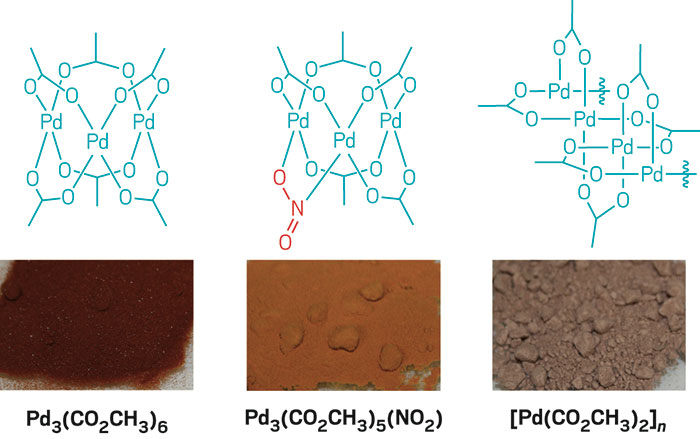 Palladium is the king of transition-metal catalysts. It earned the title, along with a Nobel Prize, because of its versatility in catalyzing C–H bond activation and cross-coupling reactions of many different types of organic molecules to make pharmaceuticals, agrochemicals, and electronic materials.

The presence of these impurities is no secret. But the popular belief has been that they don’t significantly impact reaction outcomes. Yet, some researchers have expressed frustration at encountering problems from time to time with the reproducibility, activity, and selectivity of palladium acetate and other palladium catalyst precursors. These problems arise when chemists move from batch to batch of material or when they switch from one supplier to another—situations that could change the amounts of the impurities. Chemists also run into these issues when transforming a reaction from bench scale to production scale.

To get to the bottom of what’s been going on, researchers led by process development engineer William A. Carole and Global R&D Manager Thomas J. Colacot of Johnson Matthey Catalysis & Chiral Technologies, a leading palladium catalyst supplier, have taken on the role of mythbusters.

The team has conducted the first systematic study of pure palladium acetate, Pd3(CO2CH3)6, and its two major impurities: the nitro analog Pd3(CO2CH3)5(NO2) and polymeric [Pd(CO2CH3)2]n. With their results, the researchers have issued a palladium acetate user’s guide for the chemistry community in which they identify an optimum synthesis of the material, explain how to verify its purity, and demonstrate the impact of palladium acetate and its impurities on catalyst performance (Chem. Eur. J. 2016, DOI: 10.1002/chem.201601450).

“Chemists today don’t make catalysts—they buy, open the bottle, and let the genie do its magic,” observes veteran organic chemist Victor Snieckus of Queen’s University, in Ontario. “So what is in the bottle? Carole and Colacot have unraveled the structural complexity to show that the catalyst and its impurities can be culprits or redeemers in the outcome of a palladium-catalyzed reaction, behaving chameleon-like and changing between different forms depending on the conditions.”

Snieckus suggests that the impact of the reported findings won’t be measured by any citation index “but will be evidenced in the future literature of new palladium-catalyzed organic reactions.”

Carole, Colacot, and their colleagues began by exploring palladium acetate preparation methods. The most common synthesis involves refluxing palladium powder with a mixture of glacial acetic acid and a small amount of nitric acid. They found that varying amounts of the nitro and polymeric impurities form, depending on reaction conditions.

The team next turned to reported methods for making Pd3(CO2CH3)6 that suppress the formation of impurities. The best option, the researchers concluded, is to avoid approaches that use water and nitric acid or other strong acids. They then developed a new synthesis that achieves 99.8% pure Pd3(CO2CH3)6 by treating palladium pivalate with acetic acid (Org. Lett. 2015, DOI: 10.1021/acs.orglett.5b02835).

With an optimal synthesis in hand, the team turned to the best methods for determining the purity of Pd3(CO2CH3)6. This can be a complicated task, Colacot explains, because the structures of Pd3(CO2CH3)6 and its impurities are very closely related. On the basis of their studies, the researchers advise chemists to evaluate the starting material with a combination of physical tests, such as measuring solubility and melting point, coupled with infrared spectroscopy, solution-phase 1H and solid-state 13C nuclear magnetic resonance spectroscopy, and elemental analysis. “This combination of readily available methods provides an accurate assessment of the amount of impurities in any sample,” Colacot says.

An additional key point of the careful characterization, Colacot says, was to verify the structure of Pd3(CO2CH3)6 in the solid state and in solution. The researchers confirmed that the solid takes on a trimeric structure, which is important, he says, because some suppliers incorrectly claim that palladium acetate is monomeric.

In solution, the team found that Pd3(CO2CH3)6 tends to maintain the trimeric structure in nonpolar organic solvents. But it can undergo ligand exchange in water or alcohols to generate hydroxyl or alkoxy forms. Ultimately, not recognizing the palladium compound’s exact composition can lead chemists to misinterpret catalyst mechanisms and improperly calculate catalyst performance, Colacot notes.

“This study will change the way we look at palladium acetate,” says Chris H. Senanayake, vice president of chemical development for Boehringer Ingelheim Pharmaceuticals. In drug discovery, medicinal chemists are not as concerned about whether catalyst purity will impede or enhance reactivity because they are moving quickly to find successful reactions and drug candidates and optimizing yields is a low priority, Senanayake explains.

But for academics, and for chemists manufacturing active pharmaceutical ingredients, costs are important, he says. Process chemists want to operate at the lowest catalyst loading possible for economic reasons, plus they want to minimize palladium use to prevent trace amounts ending up in the drug, which are costly to remove. “In that regard, choosing a palladium precursor source wisely and understanding the composition and purity of the catalyst are critical,” Senanayake adds. “It could make the difference between a good invention and a great invention.”

The Johnson Matthey team next turned to testing the catalytic activity of pure samples of the three palladium compounds in a series of reactions. Chemists had already known some differences in their activity. For example, Pd3(CO2CH3)5(NO2), which can be present in a significant amount in purchased Pd3(CO2CH3)6, is known to be the more soluble of the two. But these two compounds tend to have the same catalytic efficacy, the researchers note. And to the team’s knowledge, the polymeric variant has always been considered inactive and useless.

Still, the team found those trends weren’t always true. In one test reaction, the researchers carried out a Buchwald-Hartwig amination of 3-bromoanisole with morpholine, using the chiral ligand (S)-BINAP. To the team’s surprise, all three palladium compounds were equally effective in forming the substituted morpholine product. To understand [Pd(CO2CH3)2]n’s unexpected activity, the team conducted a set of experiments and found that, under certain conditions, the amine promotes depolymerization of the material, forming an active catalyst.

In another test, the researchers conducted a Suzuki-Miyaura cross-coupling of 4-chloroanisole with o-tolylboronic acid using phosphine ligands. The nitro analog proved slightly more active than Pd3(CO2CH3)6 in forming the biaryl product, presumably because of its better solubility, they note. The polymeric catalyst performed almost as well at higher temperatures, but its activity dropped off at room temperature, a possible consequence of its lower solubility and limits in its ability to break down. In subsequent reactions without a ligand, the polymeric version performed poorly, suggesting that ligands could help form a monomeric active catalyst.

And when the team attempted to use the three compounds to form Buchwald-type phosphine palladacycle catalysts, only Pd3(CO2CH3)6 and Pd3(CO2CH3)5(NO2) were successful, although the nitro analog provided lower yield and produced unidentified impurities. The polymeric material failed because it couldn’t form the necessary intermediate.

The take-home message Colacot hopes to pass on to fellow chemists is how important it is to use high-purity palladium acetate as a control when evaluating commercial samples. In addition, Colacot finds it interesting that chemists can control reaction conditions to make all three versions catalytically useful. “This could lead to the pure nitro and pure polymeric forms being developed as new products, which could open up new applications,” he suggests.

“It’s always illuminating to see the dynamic chemistry at work in those things we consider to be static and invariant,” observes Scott Batcheller, head of chemistry R&D at MilliporeSigma, which makes and sells palladium catalysts. “This important work by Carole and Colacot shows us that there’s often something to learn when we step back and question assumptions like the nature of standard reagents and commodity chemicals. The chemists who read about this work will be in a much better position to obtain predictable and reproducible results with palladium acetate.”

Comments
Manjeet Chhetri (May 3, 2016 12:57 AM)
This kind of study is very much essential in order to bring genuinity and consistency of the reports as far as reproducibility of results are concerned.
Reply »

Joseph H. Guth PhD (May 4, 2016 4:01 PM)
I was wondering if this is also a possible basis for explaining how platinum and palladium initially active catalysts become "poisoned" and inactive in various reactions and electrochemical electrodes I have used over the years? Are there any other less active forms created with sulfides, oxygen or similar trace reactants present as background impurities that have been identified? Can we extrpolate this set of mechanisms to platinum-based catalysts too?
Reply »

ashok kumar, Ph.D. (May 5, 2016 12:52 AM)
It is important and useful to publish new research at faster pace to claim priority and also to make it reach to users, but in the race of publishing fast and increase the numbers of publications/ citations, scientist do not give due respect to the type of work presented here to find reasons for inconsistencies observed during repetitions and scale-ups.
In my opinion this sort of work, considered to be the domain of Process Research, should also get enough respect/importance, even if it is not considered at par with new discoveries.
Reply »

Thomas (May 5, 2016 2:59 PM)
This will be useful for electronic industries, if one wants a high purity Pd source. We have not looked into Pt yet.
Reply »