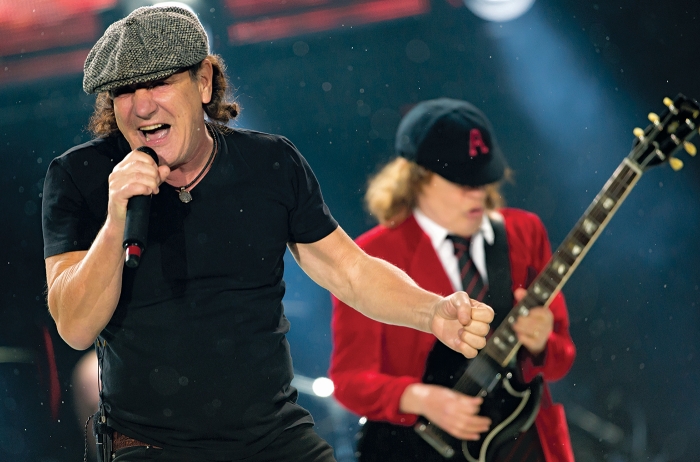 Down the halls of the University of South Australia, the bombastic and booming AC/DC track “Thunderstruck” emanates from Nicolas H. Voelcker’s lab. Now, loud music isn’t uncommon to find playing in a research lab, but using it for a critical production step in making a chemotherapeutic agent is.

So what inspired Voelcker’s research group to rock out? The scientists were working on formulating biodegradable porous silicon microparticles loaded with a chemotherapeutic drug, but the microparticles kept dissolving too quickly for sustained release applications, Voelcker says. One night at a conference dinner, after a bit of beer and wine, Voelcker and his colleagues came up with a solution.

“We have a plasma reactor which can apply hydrophobic coatings around microparticles to enhance their stability, but they only coat the side that is exposed,” Voelcker says, “That is why we thought of using a loudspeaker, so that the microparticles could bounce and all sides would be exposed and homogenously coated.” Like fans at a concert, the harder the rock, the more the particles would bounce, Voelcker explains. “Hence it was not far-fetched to use AC/DC tracks in conjunction with this technology.”

Voelcker tells the Newscripts gang that the procedure could be adapted to other musical stylings. “Other genres worked as well,” he says, “but since the student and postdoc who did all the work are hard rock fans, they tended to stick to that. ‘Thunderstruck’ possesses the adequate low-frequency beat to sufficiently bounce the porous silicon microparticles without throwing them off the plasma reactor.”

Scientists throughout history fight for supremacy 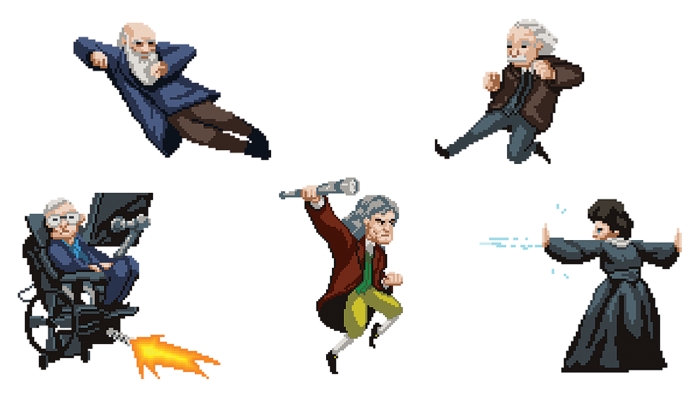 Famous scientists equipped with superpowers and duking it out is the latest two-dimensional game to capture the attention of nerds and gamers on the internet. The game “Science Kombat” offers players the chance to play as several scientific superstars, including Marie Curie, Albert Einstein, Stephen Hawking, Pythagoras, Nikola Tesla, and Alan Turing.

The browser-based game was developed for Brazilian science and culture magazine Superinteressante by Diego Sanches and is available to play for free on the magazine’s website at tinyurl.com/zzq2dp7.

Currently, the game has two modes of play: single fight and tournament play. In tournament play, users battle their way through eight of history’s best scientists until they reach the mysterious final boss, Divinity, who has his own special moves.

The game has two unfortunate drawbacks. It cannot be played in a multiplayer mode, and it contains only one playable female scientist and no minority scientists. “Science Kombat” is still in a trial phase, so gamers can hope that the finished product will include an expanded and diverse character roster of scientists.

Synthesis
Science On The Small Screen
Food Science
Periodic Graphics: The Chemistry Of A Pint Of Guinness
Education
Better Gaming Through Chemistry, Tiny Windmills
Share X
To send an e-mail to multiple recipients, separate e-mail addresses with a comma, semicolon, or both.
Title: AC/DC chemistry and street-fighting scientists
Author: Mitch André Garcia
Chemical & Engineering News will not share your email address with any other person or company.