How are ACS membership dues increases determined, and why are they necessary? 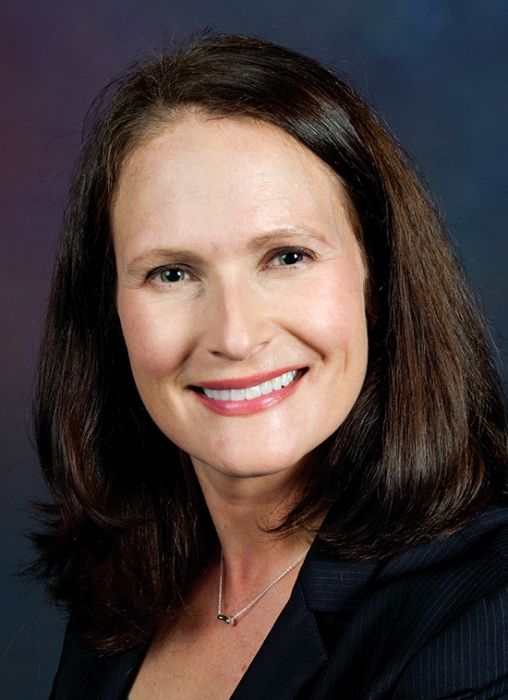 Each spring, the Society Committee on Budget & Finance (B&F) reviews a proposed membership dues increase for the following calendar year. Between 2015 and 2016, dues increased $4.00, from $158 to $162. In 2017, dues will increase $4.00 again, to $166. These increases may seem arbitrary, but they are actually tied to inflation and determined using a formula specified in the ACS Bylaws.

Bylaw XIII, Section 3 (www.acs.org/bulletin5), set the base dues for 1986 at $69 and specifies that dues for each succeeding year will be calculated using the increase in the Consumer Price Index for Urban Wage & Clerical Workers (CPI-W) for services over the two years prior to the year in which the dues increase is considered. So for 1987, the dues increase was calculated by multiplying $69 by the change in the CPI-W for services between December 1984 and December 1985. The CPI-W reflects the average change in prices paid for services by households in which more than half of annual income comes from wage or clerical occupations. The Consumer Price Index is calculated by the Department of Labor as a proxy for inflation and is a standard metric for adjusting prices. Between 2014 and 2015, the CPI-W increased 2.44%, and 2.44% of $162 is $3.95. Bylaw XIII specifies that dues increases should be rounded to the nearest dollar; this is how the $4.00 increase for 2017 was determined. B&F may propose that council accept the calculated increase, reject it, or increase dues by a lesser amount. Council votes on B&F’s proposal at the spring ACS national meeting. 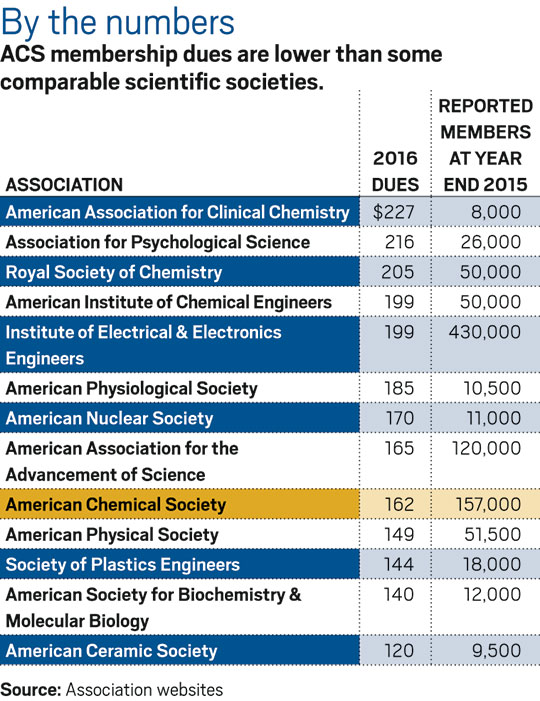 Bylaw XIII also specifies how most dues revenue is spent. Dues must be used to cover printing and distribution costs associated with the editorial portion of Chemical & Engineering News (42% of dues revenue, $6.3 million, in 2015) and to fund local sections and divisions (20% of dues, $3.15 million, in 2015). Dues also support member services, which sends us reminders to pay dues, incurs processing fees from credit card payments, and maintains and updates member records ($3.8 million in 2015). And because ACS values education, all revenue from student member dues ($400,000 in 2015) is allocated to student programs. Dues also offset information technology costs ($1.26 million in 2015). The remaining balance goes to support society programs.

What happens when dues don’t increase? C&EN, member services, and IT still must be funded, so any increase in their costs is offset by a corresponding decrease in the contribution to society programs.

But society programs are not predominantly supported by dues revenue; they are supported by contributions from ACS’s major business units, Chemical Abstracts Service (CAS) and ACS Publications, and by income from the society’s investments. CAS, Publications, and investments provided nearly $45 million in 2015 to support society programs, including the offices of Public Affairs, Education, and Membership & Scientific Advancement. By comparison, ACS’s total dues revenue is about $16 million.

When dues don’t increase, the major impacts fall on local sections, divisions, and student programs—ACS’s grassroots units. The costs of these units’ activities also increase with inflation. When dues remain flat, our local section, division, and student volunteers have to get by with, effectively, less. A 2.44% dues increase translates directly into a 2.44% increase in the contribution to local sections and divisions, so when dues increase by $4.00 in 2017, about $77,000 more will go to local sections and divisions to help fund a host of activities in communities all over the nation, including National Chemistry Week and local government-affairs activities. Please consider this when your dues reminder arrives for 2017; from my perspective as a former local section chair, that $4.00 is a pretty good investment.

Comments
Robert Buntrock (May 19, 2016 10:33 AM)
Not mentioned are reduced dues for some categories of members including students and no dues for 50 year members. Those who criticize dues rates should note the other, larger, contributions to the ACS budget.
Reply »