With oil prices down, the oil and gas industry is under significant pressure to cut costs, whether by reducing workforces, pulling back from exploratory drilling, or—as the study referenced in a recent article by Elizabeth Wilson suggests (C&EN, April 11, page 6)—eliminating other production expenditures that could be viewed as extraneous or less essential in the short term. 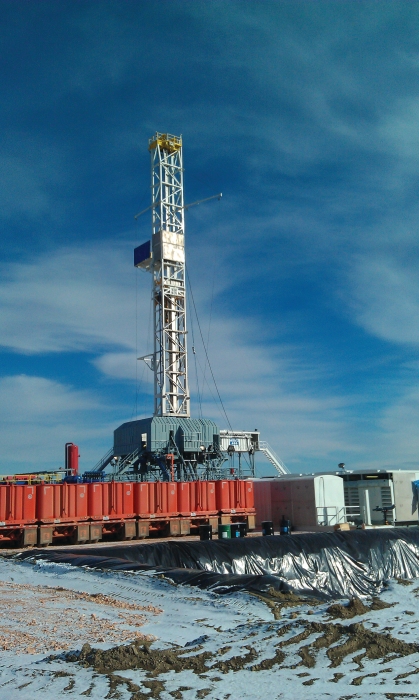 Credit: Wikimedia Commons
Fracking sites are widespread in the Bakken Formation of the northcentral U.S. and Canada

The study Wilson referenced in her article “Biocides May Not Be Needed for Fracking” implies that adding a biocide to a fracturing fluid isn’t always needed, a statement contradictory to safe and more sustainable hydraulic fracturing practices. It is important to realize that poor microbial control practices can actually lead to significant problems in the long term. In fact, by employing a holistic biocide program, operators can obtain longer-term production benefits and optimize their total cost of operation.

A “well-by-well approach to applying biocides,” as the cited study suggests, puts operations at risk of contamination from microbes either grown or introduced at different points in the hydraulic fracturing cycle. A holistic biocide program is recommended in order to protect the hydrocarbons from souring, to protect assets from microbially influenced corrosion, and to prevent biofouling in the system that can negatively impact flow assurance. Proper biocide selection will employ use of sustainable chemistries that are effective at controlling microbes, are biodegradable, and do no harm to products, processes, or the environment.

Moreover, the study quoted in the article states that “temperatures at the depths that the biocide-laden water is injected run about 120 °C, too hot for sulfogenic microbes to survive.” Although it’s true that some bacteria are not able to proliferate at 120 °C, temperatures vary throughout the cycle of operations and some bacteria do thrive at elevated temperatures. Numerous studies indicate that injected fluids often contain the most problematic souring and corrosive microbes. These organisms may not proliferate in the harshest down-hole conditions (for example, sites where the temperature exceeds 120 °C), but they can survive the residence time from drilling to production and become established in more favorable niches, including in equipment and pipelines. DNA analyses and sulfur isotoping of the intrinsic reservoir fluids should not provide the only justification (or lack thereof) for a biocide program.

While it may be tempting to interpret the study cited by Wilson as a call to eliminate the use of biocides in the hydraulic fracturing process, operators should keep in mind that sustainable microbial control chemistries help preserve asset integrity and production efficiency in the long term.

It would of course be great if the water contains no bacteria and therefore no biocide is needed in operations, as reported by Wilson in her recent article. However, this may not be the representative reality for most of the oil-field operations in the world. With the implementation of oil-field technologies such as multistage fracturing and horizontal wells, water usage has been increasing rapidly, especially in unconventional plays.

With high prices for and insufficient supplies of clean freshwater, oil companies may instead use flowback water (water that flows back from wells after fracking jobs), produced water (water that is produced along with oil and gas), or any other low-quality water sources such as undrinkable river and pond water. These water sources could contain high counts of bacteria, especially in hot summer weather, and biocides will therefore have to be added to mitigate bacteria-related issues.

What is more, even with high bottom-hole well temperatures that can kill bacteria in pumped fracturing fluids, bacteria can still survive in relatively cooler equipment or tubes of the production systems. Without proper protection by biocides, these bacteria will quickly come back and cause damages.

Environment
Microbial communities thrive in fracking wells
Environment
Toxic biocides may not be needed routinely at fracking sites, study shows
Environment
Shallow Fracking Wells May Threaten Aquifers
Share X
To send an e-mail to multiple recipients, separate e-mail addresses with a comma, semicolon, or both.
Title: Fracking fluid biocides
Author:
Chemical & Engineering News will not share your email address with any other person or company.

Comments
Scott Lamb (May 13, 2016 11:29 AM)
The term, "Biocide-laden water" is a little revealing of the bias under which the article appears to have been written: The water has parts-per-million micro-biocide which has EPA approval to be used in frac water only after a very rigorous evaluative process. I would also question how and where the 120 C temperature was taken. The fractured formation has a wide spectrum of temperatures and production profiles. Bacteria, biomass, and bacterial waste (FeS) may block the most productive parts of the fracture, and seriously impede output. A ounce of prevention is worth a pound of cure.
Reply »

Jay Calk (May 21, 2016 9:13 PM)
With the state of energy market today and efficiency in price everything is under the ax. This is absolutely one of the last things that should be eliminated. When you need your water as free of bacteria as you can safely ascertain. Today's slick frac water has to have a strong bacteria agent. Tempature does effect the bugs be it hot or cold
Reply »

p (January 8, 2017 2:21 AM)
Yea, but how about its not completely neutralized or destroyed and then water trmt facility gets it...killing lots of bugs that are needed...this can seriously affect water effluent at times..
Reply »

Vladimir Orlov (May 15, 2016 8:29 AM)
Thank you for the article.
In Russia we typically use a quick kill biocide - DBNPA powder in water soluble bags. It accounts for probably 80-90% of the market. The remainder is represented by Dazomet powder, which is understood as a slow kill and lasting longer. Powder forms are preferred to liquid ones. Can you recommend any other dry forms of biocides efficiently protecting both the frac fluid and the formation after the frac job is done?
Reply »

P (January 8, 2017 2:08 AM)
Read this with interest....there is something you are missing here. The biocides routinely used stay in some form and when crude from fracking is processed, the biocide is volatilized or becomes entrained in processes. Process water is then treated by a biotreatment plant...This may be causing destruction of the bacteria used to clean the very water that is contaminated...Whats your response to that.
Reply »