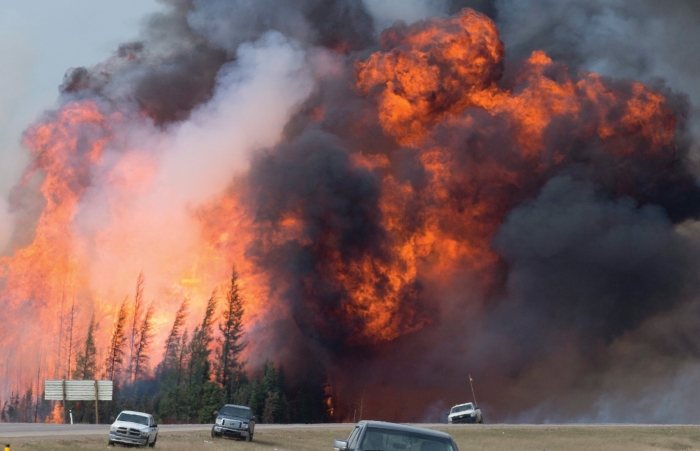 As of Wednesday, May 12, the Fort McMurray fire, still active and spreading, had consumed 2,300 km2, an area about half the size of Delaware. The Alberta government issued a mandatory evacuation order for 80,000 residents. Despite extensive damage—about 10% of the area’s building stock, or 2,400 structures, burned—no one was reported to be killed in the blaze.

Fort McMurray is home to Canada’s oil sands, which are mined in enormous open pits and processed into bitumen and synthetic crude oil. As the flames grew, oil sands firms shut down operations and evacuated workers as precautionary measures.

According to the energy information service Platts, some 820,000 barrels per day of production, about one-fifth of Canada’s total oil output, was curtailed because of the fires.

Fire threatened the southern end of Suncor’s mining operations in Wood Buffalo but was beaten back. “Over the weekend, several hundred people, including first responders, contractors, and Suncor essential personnel, protected our oil sands operations,” Suncor CEO Steve Williams said on May 8. “We’re now in a position that when it is safe to restart, we can do so quickly.” The company was producing about 300,000 bbl per day before the fire.

Early last week, some companies were already moving to restore production. Shell restarted its Albian operations on May 9. The same day, Syncrude had to discourage employees from reporting to work because it wasn’t yet ready to reopen.

Alberta’s chemical industry is far from Fort McMurray and is based mostly on the region’s natural gas rather than its oil. Dow Chemical, about four hours south by car in Fort Saskatchewan, experienced no disruptions but was monitoring the situation.

Nova Chemicals, six hours south in Joffre, reported a small, indirect influence from the fire. “Ethylene production rates at Joffre have been reduced slightly” because of lower consumer consumption, a spokesperson said.