[+]Enlarge
Credit: Mark Wingard/CSB
A 2013 fire and explosion at a fertilizer store in West, Texas, killed 15 people and injured more than 200. 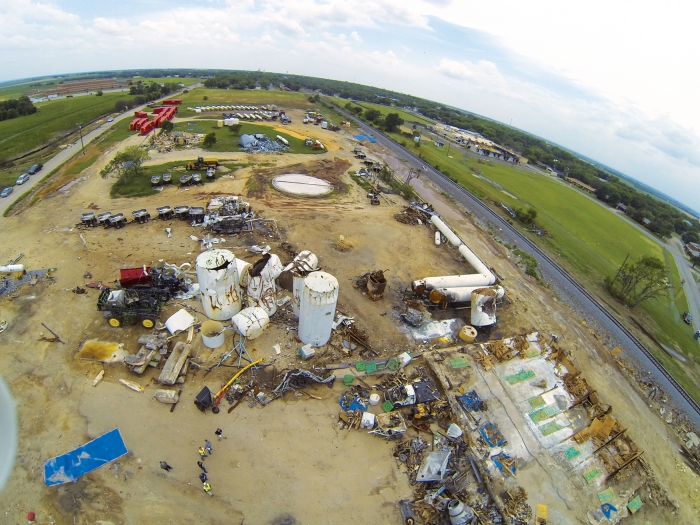 Credit: Mark Wingard/CSB
A 2013 fire and explosion at a fertilizer store in West, Texas, killed 15 people and injured more than 200.

An intentionally set fire caused the massive ammonium nitrate explosion in April 2013 that killed 15 people and injured hundreds more in West, Texas, federal officials announced last week. “We hypothesized, considered, tested, and eliminated all reasonable accidental and natural causes,” says Rob Elder, special agent for the Bureau of Alcohol, Tobacco, Firearms & Explosives. “This fire was a criminal act.” ATF is offering up to $50,000 for information leading to the arrest of whoever set the blaze at the West Fertilizer Co. storage facility. Elder said investigators determined the fire was started on purpose after they conducted more than 400 interviews and analyzed evidence at the blast site along with witness photos and videos. They also performed extensive testing at an ATF fire research lab in Beltsville, Md. No arrests have been made and authorities would not comment on whether there are any suspects. But, Elder adds, “I think we’re on the right path.”

Safety
Feds End Probe Of Tesoro Blast
Safety
Safety Board Is Barred From Accident Site
Safety
Deadly Fertilizer Explosion
Share X
To send an e-mail to multiple recipients, separate e-mail addresses with a comma, semicolon, or both.
Title: Arson led to fatal fertilizer explosion
Author: Glenn Hess, special to C&EN
Chemical & Engineering News will not share your email address with any other person or company.