Artist explores the blackest black, and wasps build with a colorful palette

Artist goes back to black

[+]Enlarge
Credit: Surrey NanoSystems
Paint it black: A coating of Vantablack turns a mask into a seemingly empty void. 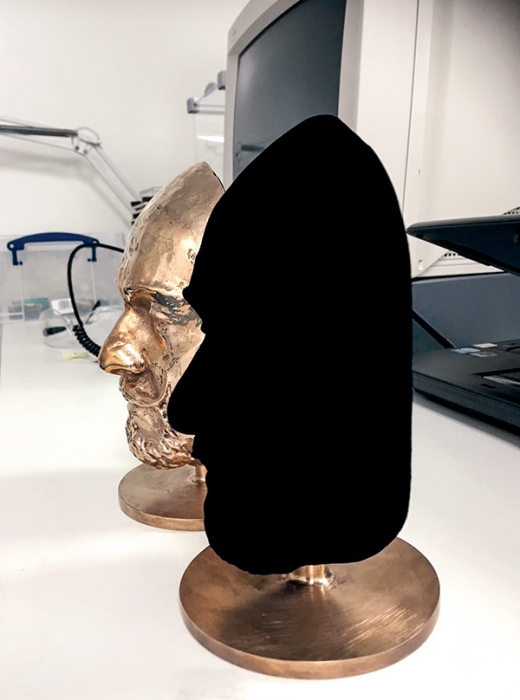 Credit: Surrey NanoSystems
Paint it black: A coating of Vantablack turns a mask into a seemingly empty void.

Picasso had his blue period. Now, British artist Anish Kapoor is dabbling in the darkest of dark arts. Kapoor has received an exclusive license to explore the use of Surrey NanoSystems’ coating product Vantablack in art. Made of vertically aligned carbon nanotube arrays, hence the name, Vantablack absorbs 99.965% of the light that hits it, making it the blackest of blacks.

Some of Kapoor’s works have made use of reflective surfaces, such as in the silver, bean-shaped “Cloud Gate” sculpture in Chicago, which reflects the city’s skyline as well as the smiling faces of selfie-snapping tourists. Kapoor told the BBC that he’s always been drawn to exotic materials because of how they can make you feel. With Vantablack, he says, “imagine a space that’s so dark that as you’re walking you lose all sense of where you are, what you are, and especially all sense of time.”

The light that gets trapped in the darker-than-pitch material experiences something similar. It enters the forest of carbon nanotubes, bounces around, and finally gets absorbed and converted to heat. Most of the material is empty space; the nanotubes take up only 0.05% of the coating by volume.

Even for ordinary folks, a material known as the blackest black can fire up the imagination as to possible applications. One frequently asked question on Surrey NanoSystems’ website is “Can I apply Vantablack to my car?” For drivers who are hoping to turn their minivan into a stealth vehicle, the answer is probably not. Although the material resists shock and vibration, Vantablack is easily damaged by abrasion. Not to mention that “it would also be incredibly expensive,” according to the company.

Given the material’s fragility, it’s unlikely Kapoor will be covering a public sculpture in the stuff anytime soon. But in an art museum with a look-but-don’t-touch policy, Vantablack could be a fantastic way to duplicate the experience of stepping into the void. 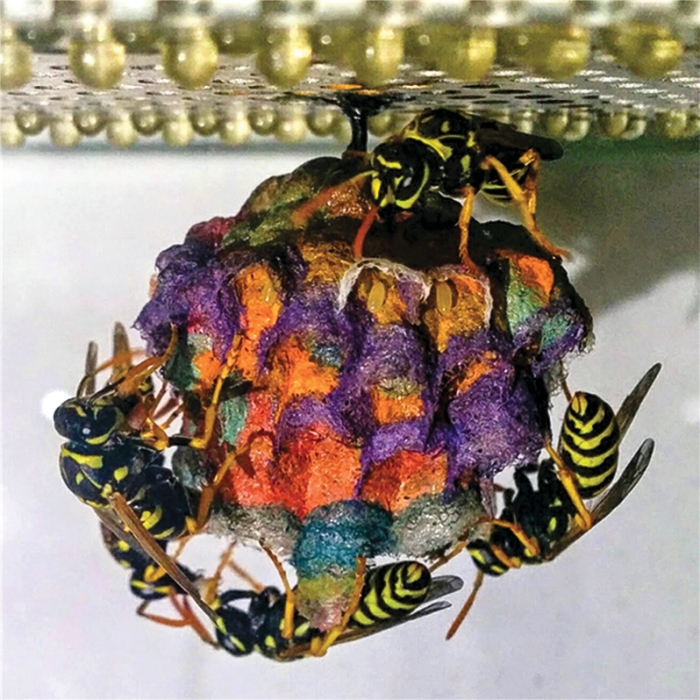 Even without access to high-tech building materials, insects can create some impressive structures: beehives, termite mounds, and wasp nests, to name a few. And provided with some unusual supplies, they can also make colorful ones.

Mattia Menchetti, a biology graduate student at the University of Florence, gave a captive colony of European paper wasps (Polistes dominula) colored paper to make their nest. As he documented on his blog (mat​tiamenchetti.com), Menchetti started by giving the wasps yellow paper, then followed with other colors. The result was a rainbow-colored nest unlike the drab ones the wasps would normally make from chewed-up wood pulp. The colorful dwellings don’t make wasp nests any less terrifying, but their beauty has been creating some buzz.

Ionic Liquids
Chemistry in Pictures: Papa’s got a brand new solvent
Materials
Fluorescent materials are the brightest ever made
Biomaterials
Fruit’s metallic blue caused by lipid nanostructures
Share X
To send an e-mail to multiple recipients, separate e-mail addresses with a comma, semicolon, or both.
Title: Artist explores the blackest black, and wasps build with a colorful palette
Author: Corinna Wu
Chemical & Engineering News will not share your email address with any other person or company.