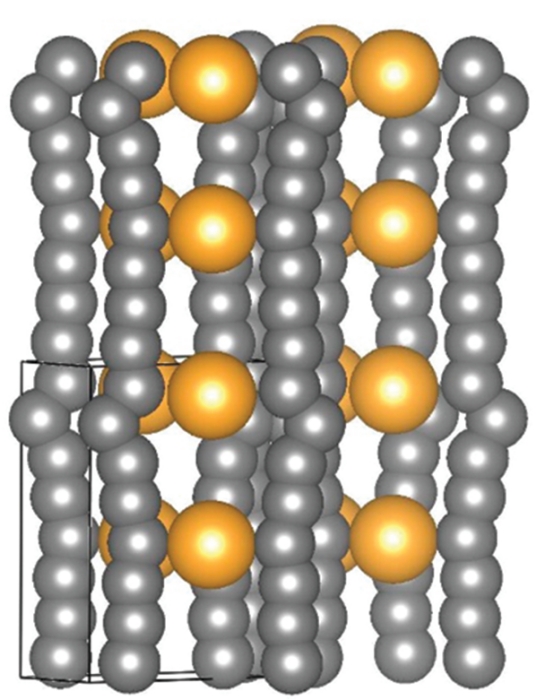 Sixteen days before his death last month, Nobel Laureate Harold W. Kroto published a study with colleagues at Arizona State University that ends thusly: “The bottom line is that carbyne, the linear carbon allotrope, remains as elusive and theoretical as ever.”

Last October, Guowei Yang of Sun Yat-sen University and coworkers reported that they had made carbyne crystals with the help of gold (Sci. Adv. 2015, DOI: 10.1126/sciadv.1500857). Firing a laser at a gold target in ethanol forms a small plasma above the target where carbyne can form, the team said.

Although transmission electron microscopy revealed that gold nanoparticles rested on the exterior of the crystal structures, further analyses, including Raman spectroscopy, led Yang’s team to conclude that gold was not integrated into the crystals. In other words, the substance was carbyne, a string of carbon atoms bonded together with alternating single and triple bonds.

The Arizona State researchers and Kroto contested the report with a letter to Science Advances in January and now have data from simulations that indicate that the material is composed of carbon chains stabilized by gold nanoparticles (J. Phys. Chem. Lett. 2016, DOI: 10.1021/acs.jpclett.6b00671). The misidentification of gold-stabilized pseudocarbyne as pure carbyne can be chalked up to misinterpreted data, Buseck says.

For example, Yang’s team stated that a peak in an experimental Raman spectrum corresponded to carbon-carbon single bonds in carbyne. Yet the simulations did not reproduce this peak unless linear carbon chains were attached to gold particles. The appearance of this peak is likely due to the same plasmonic effect that metals provide in surface-enhanced Raman spectroscopy, Tarakeshwar says.

Yang stands by his team’s initial assessment, however. Different metal targets, such as palladium, produced crystals that yielded identical spectra, he says, although this was not shown in the October study. Different metals would have different spectra were they part of the crystal. Yang says the computational work is “just a theoretical simulation, not supported by any experimental observations.”

Experimental measurements do exist, but all the data were collected by Yang’s team, Buseck states. He adds that he has unsuccessfully tried to obtain samples from Yang to analyze. Although metal-stabilized carbon chains are not carbyne, they could be an interesting new class of materials, but that’s just speculation until there is more experimental evidence, Buseck says.

Chemical Bonding
Boron makes quadruple bond with rhodium
2-D Materials
Borophene could have impressive electronic and physical properties
Materials
Contention Over Carbyne
Share X
To send an e-mail to multiple recipients, separate e-mail addresses with a comma, semicolon, or both.
Title: Harry Kroto’s last words on carbyne
Author: Matt Davenport
Chemical & Engineering News will not share your email address with any other person or company.

Comments
Yuri Prazdnikov (May 13, 2016 2:46 AM)
What about "Confined linear carbon chains as a route to bulk carbyne"?
http://www.nature.com/nmat/journal/vaop/ncurrent/full/nmat4617.html

Let me remind you once again that the word "carbyne" was introduced A.M.Sladkov (inventor of the carbyne), and it meant protonated chains. H.Kroto chose the wrong path of negation Russian achievements and took over an almost all Western physicists. This can be proved legally - there are publications and patents. Carbyne exists and this is a clear fact, whether you want it or not. Now I can only repeat what it already wrote:
http://cen.acs.org/articles/93/i46/Contention-Over-Carbyne.html

Te Kanawai (December 28, 2016 11:03 PM)
Nationalism has no in science where facts are established by hard data rather than rhetoric. The ASU Buseck group have a distinguished track record of rigorous application of electron microscopy and conservative interpretation of the data that electron microscopy provides.
Reply »