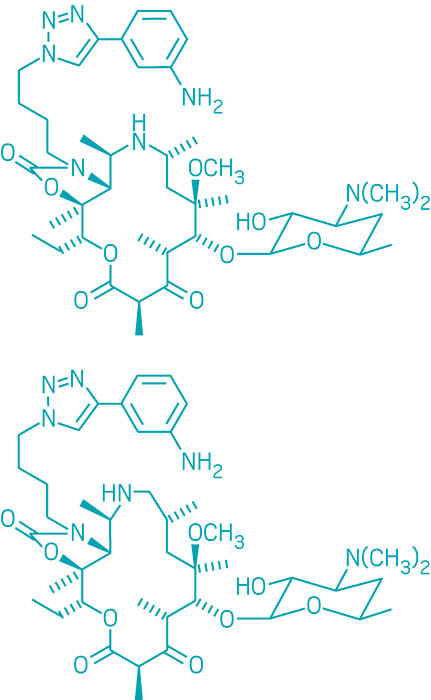 The battle between infectious bacteria and humans continues to rage. Although an armament of antibiotics gave us the upper hand for much of the 20th century, bacteria have made a comeback by developing resistance to even our strongest antibacterial compounds. Chemists have now figured out a way to revitalize our macrolide munitions, with a fully synthetic approach that allows them to make previously inaccessible compounds.

Macrolide antibiotics are characterized by a central ring of typically 14, 15, or 16 atoms. Although they’re popular, only a few have ever been approved by the Food & Drug Administration. All of those are made via a semisynthetic approach that starts with fermentation in large-scale reactors to produce the macrolide antibiotic erythromycin.

Over the years, chemists have cleverly found ways to decorate erythromycin’s scaffold to create compounds with better properties, says Harvard University chemist Andrew G. Myers. But nevertheless, he adds, having to start with erythromycin is incredibly limiting: “Erythromycin is a dauntingly complex molecule. It’s got a density of functional groups and a stereochemical array that makes it extremely challenging to do chemistry selectively and specifically.”

Now, chemists in Myers’s group have developed a synthetic strategy that allows them to construct macrolides in a modular way. They create eight small-chemical building blocks with a few synthetic transformations and then weld them together in a few steps. The strategy uses both established chemistry as well as novel transformations. The chemistry can be done on a multigram scale, enabling the chemists to prepare enough of each macrolide for biological studies.

Myers and his team report they were able to make more than 300 antibiotic candidates using the strategy (Nature 2016, DOI: 10.1038/nature17967). “We’ve really only scratched the surface,” Myers says. “I don’t think it would be an exaggeration to say that tens of thousands of molecules, and probably more, can be accessed for the first time using this platform.”

Phil S. Baran and Ming Yan, synthetic organic chemists at Scripps Research Institute California, describe the work as “ingenious” in a commentary that accompanies the new report. “No antibiotic is impervious to the power of evolution—bacteria will always mutate to develop resistance, which means that new antibiotics must be pursued continuously and perpetually,” they write.

The synthetic platform developed by Myers and colleagues offers rapid access to myriad antibiotic candidates while still giving chemists the ability to precisely control each variation, Baran and Yan point out. “This fine-tunability, along with biological knowledge, can enable chemists to keep up with bacterial evolution,” they write.

Myers says Macrolide Pharmaceuticals, a company he cofounded to develop this platform, will work toward making clinical antibiotic candidates. “I’m very pleased that, after so many years, our work has reached the stage of publication, but if this is all it comes to, I’ll be very unhappy,” Myers says. “From day one, our objective was to make new antibiotics.”