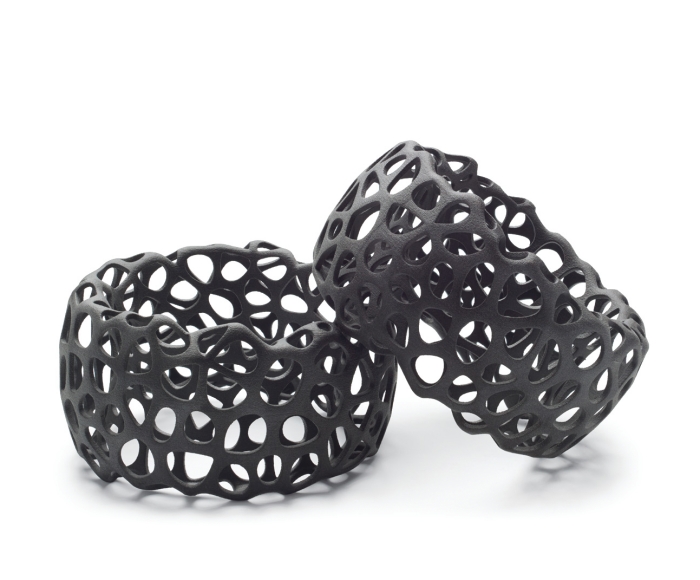 Printing and personal computing giant HP is plunging into the world of three-dimensional printing of plastics with what it calls the “world’s first production-ready commercial 3-D printing system.”

The HP machine takes a new approach to 3-D printing compared with the two most common methods for printing thermoplastics today, fused deposition modeling (FDM) and laser sintering. In FDM, a plastic filament is heated in a nozzle that draws parts layer by layer. In laser sintering, lasers trace parts out from a vat of resin powder.

HP’s process uses two steps to build each layer. In the first, plastic powder is laid down on a platform. Then, droplets of undisclosed chemicals the company calls “fusing and detailing agents”—300 million of them per second—rain down on the blanket of powder. The machine fuses the plastic particles together with heat.

HP says its machines are capable of making parts at a high resolution. Its voxels—analogous to pixels in digital photography—are 20 µm2 by 60 µm high. Additionally, thanks to what it dubs “transforming agents,” HP envisions coloring and texturing the voxels and even adding electronic functionality.

So far, the company is using nylon 12, a resin commonly used for laser sintering, as the plastic for its machine. Several engineering polymer makers, including Arkema, BASF, and Evonik Industries, are participating in an open platform to develop more materials for HP.

HP says its machines can make parts 10 times as fast as and at half the cost of other 3-D printing systems. The company is working with manufacturers such as BMW, Nike, and Siemens. BMW evaluated the first prototype of the machine five years ago.

“I expect the new HP technology will do well due to its speed, part quality, and operating cost,” says Terry Wohlers, president of the 3-D printing consultancy Wohlers Associates. “It will motivate companies to consider the use of 3-D printing for final part production.”

The 3-D printing market was worth $5.2 billion last year, according to Wohlers. If the technique captures just 5% of the manufacturing sector, it will become a $640 billion industry, he says.