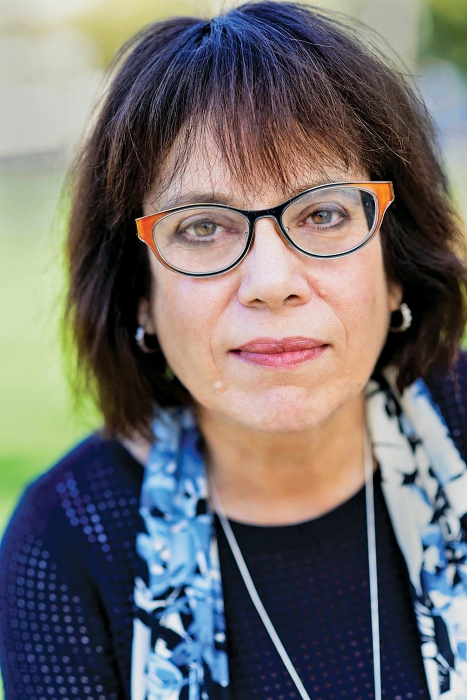 The objects that decorate Deborah Blum’s office highlight some of the writer’s accomplishments but also hint at her quirks: Plaques marking her 1992 Pulitzer Prize and her 2015 James T. Grady-James H. Stack Award for Interpreting Chemistry for the Public hang on one wall, while the opposite wall is home to a portrait of a 19th-century asylum for the insane. A toy typewriter sits on her desk, an old bottle that once held Prohibition-era “prescription whiskey” graces her bookshelf, and at the center of a small table—where a more mundane person might keep a vase of flowers—Blum has a Bunsen burner.

The Bunsen burner is a gift from Bassam Shakhashiri, a chemistry professor at the University of Wisconsin, Madison, where Blum was a journalism professor for 18 years before taking her current post as director of the Knight Science Journalism program at Massachusetts Institute of Technology last summer. The bit of lab equipment reminds Blum of the fateful day she set her hair alight in a college laboratory and decided to rethink chemistry as her chosen career.

▸ Books: “The Monkey Wars,” “Sex on the Brain,” “Love at Goon Park,” “Ghost Hunters,” and “The Poisoner’s Handbook”

Blum, who is a member of C&EN’s advisory board, says she still considers chemistry to be “the most astonishingly beautiful science.” But careerwise, science journalism has clearly turned out to be the better fit. She’s written for many newspapers and magazines and is the author of several books, including “The Poisoner’s Handbook,” a chemistry-rich best seller about poisons, mysterious deaths, and two pioneering scientists.

“Chemistry makes everything about the world more interesting to me,” Blum says. “Everything is built by chemistry. I am. My chair, my table, my hair that I set on fire, the smoke, everything is chemistry. When you are able to see that, you see the building blocks of the world around you and this intricate mosaic of interactions, this incredible invisible dance of chemical elements that creates everything around us.”

That invisibility, Blum thinks, might also be what makes it so difficult for chemistry to capture the general public’s imagination in the same way that biology and cosmology do. “It’s so much easier with some of the other sciences to create a picture in people’s minds,” Blum says. “I think we are a species that responds to image really well, and it’s hard with chemistry.”

Also, Blum says, chemistry is tied to environmental risk in a way that most other sciences are not. “I do think you have to be honest about that.” Nevertheless, she says, we can’t ignore chemistry just because it has inherent risks. It’s not so much that we have to admire every aspect of chemistry, Blum explains, but it’s important to recognize that chemistry is fundamental to the way we navigate the world.

“I’m not trying to sell chemistry,” Blum continues. As a journalist, she says, that’s not her job. Rather, she sees it as her responsibility to share her fascination with chemistry. Sometimes that means highlighting when and how the science has gone wrong.

Sometimes you let the power of the story carry the science.

Blum encourages her readers to learn enough about chemistry to navigate the news with common sense. That learning is something Blum says she’d like to see done more in K–12 science education. Some scientists think that people get a postsecondary education by reading about science in the newspaper, Blum says. But they don’t. Journalists, she adds, “don’t make up for that moment where someone walked away from science in high school and thought, ‘This is boring and hard, and they think I’m stupid.’ ”

Blum says, however, she’s heartened when she gives public lectures and the people in the audience often know more about the chemistry than she does. For example, she was giving a talk and, during the Q&A period, was asked why chocolate is poisonous to dogs. She didn’t know, but many of the audience members did. (Dogs metabolize an alkaloid from the cacao bean, called theobromine, less efficiently than people do. This leads to toxicity in man’s best friend.) “That was a good lesson for me,” she says. “It’s encouraging to realize that people aren’t quite as disaffected as we think.”

As an author, Blum says engaging readers is often just about spinning a good yarn. “Sometimes you let the power of story carry the science,” she explains. “I’ll very consciously say, ‘I’m just going to tell you a good story,’ and woven through the drama of that story I’m going to tell you what the chemistry is and how that works.”

Readers can look forward to another chemistry-rich tale from Blum. Her next book is built around the story of Harvey Wiley, whom Blum describes as America’s first great food safety chemist. “I came across his story because he did a series of human guinea pig experiments with food additives at the turn of the 20th century.” The American press nicknamed the test subjects the “Poison Squad.”

This, she says, was at a time when formaldehyde went into milk, borax went into meat, and copper sulfate went into peas. “All of those are banned now, and Wiley was the scientist most responsible for driving those changes,” Blum says. The book is also about the rise of industrial food. “There’s a lot of chemistry in it. There’s a lot of science and science politics. There are many horrors of food at the turn of the 20th century,” she says, adding that she’s excited about the book, which will likely come out in 2017. “I’m also really excited that I’m turning it in this month,” she says. “I’ve been working on it forever.”

Comments
Dan Harring (June 11, 2016 11:13 PM)
This is great to see that Harvey Wiley is the subject of her next book. (along the lines of her earlier book "The Poisoner’s Handbook" chronicling the heroics of Charles Norris and Alexander Gettler; also the opening chapter of Bee Wilson's "Swindled" about Frederick Accum's efforts a century earlier)
Reply »