Polyurethane makers prepare for a phase out

As a long-used curative for urethane elastomers faces a ban in Europe, polyurethane suppliers look at alternatives 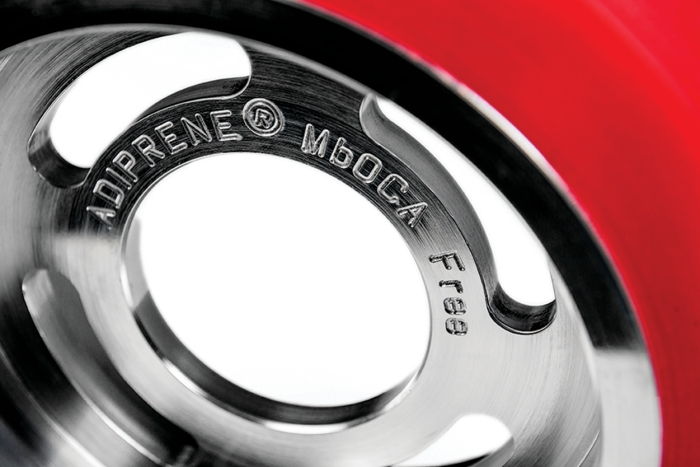 Credit: Chemtura
Companies such as Chemtura are trying to find alternatives to MOCA in polyurethanes.

It’s a scenario common in the chemical industry: A chemical is ideal for a certain use, but it is being shunned or banned outright because of environmental and health concerns.

The insecticide dichlorodiphenyltrichloroethane, or DDT, is perhaps the most famous example. Polychlorinated biphenyl (PCB) coolants and chlorofluorocarbon (CFC) refrigerants also come to mind.

Compared with these iconic chemicals, the polyurethane curative 4,4´-methylenebis 2-chloroaniline, also known as MOCA or MbOCA, is much more obscure. But it is no less useful in its own orbit of polyurethane elastomers. And the ban it faces in Europe because of toxicity fears is leading to a scramble for replacements.

For decades, MOCA has been the standard curative for toluene diisocyanate (TDI)-based polyurethane elastomers. To make them, chemical companies react TDI with a polyol, commonly polytetramethylene ether glycol (PTMEG), yielding what is called a prepolymer. Companies that fashion finished elastomeric parts mix the prepolymer with MOCA. It reacts with the isocyanate, linking the polymer strands together and curing the polyurethane.

Chuck Demarest, principal of Cerulean Technologies, which consults on polyurethane formulations, says TDI and MOCA have had “a beneficial relationship” since they were first combined in the 1950s. MOCA doesn’t react too quickly with the prepolymer, allowing for good “pot life” and ease of processing. It is forgiving of variations in the amount mixed, meaning users don’t have to be terribly precise when metering it out.

“It has a nice combination of properties that has made it the leading curative for many years,” says Thomas Peter, a technical service and applications development manager for polyurethanes at Chemtura, which supplies prepolymers and curatives.

And within the polyurethane elastomer world, MOCA-cured TDI brings distinct characteristics. An oft-cited one is its ability to adjust hardness. “A MOCA system, appropriately designed, can get you from a car-tire-type hardness all the way up to the hardness of wood,” Demarest says.

Sources say MOCA-cured TDI represents less than half of the European polyurethane elastomers market. Most of the rest of the market is served by methylene diphenyl diisocyanate (MDI)-based polyurethanes, used in applications such as skateboard wheels and shoe soles. Estimates for MOCA/TDI urethane consumption in Europe range from 4,500 to 8,000 metric tons annually.

New regulations in Europe could bring that number down to zero next year. Citing studies over the decades that link MOCA to cancer, the European Chemicals Agency (ECHA) listed MOCA as a “substance of very high concern” and placed it on the Authorization List under the Europe’s Registration, Evaluation, Authorisation & Restriction of Chemicals (REACH) regulatory regime.

By putting MOCA on the list, ECHA has set a sunset date of Nov. 22, 2017. This amounts to a ban of the chemical’s use in Europe, unless manufacturers demonstrate that they can find no substitute in specific critical applications. 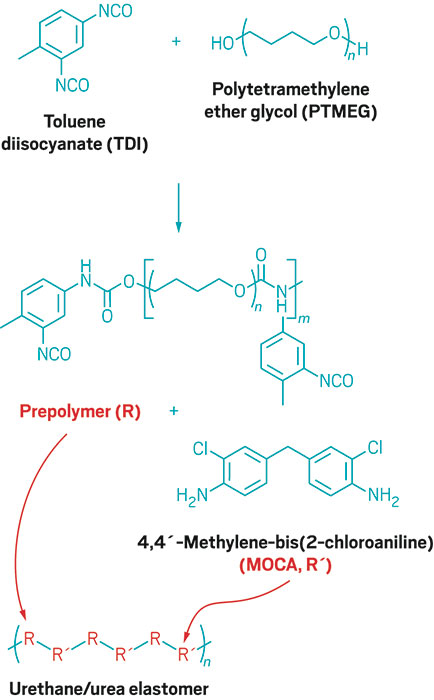 The industry is exploring two main strategies for MOCA substitution. One is to find another aromatic diamine curative to work with TDI-based prepolymers. Another is to reinvent the formula entirely and come up with new polyurethane elastomers based on MDI.

Experts say no perfect “drop in” diamine replacement for MOCA exists. All the substitutes are more expensive, don’t perform as well, or both. The leading alternatives are dimethylthiotoluenediamine (DMTDA) and 4 4´-methylenebis(3-chloro-2 6-diethylaniline) (MCDEA).

Albemarle markets DMTDA under the Ethacure brand name. The product’s performance, Demarest says, reasonably approximates that of MOCA but with a few drawbacks. Heat-buildup performance isn’t as good, and finished parts release a sulfur odor. DMTDA also costs about 1.6 times as much as MOCA.

MCDEA is made by the Swiss fine chemicals maker Lonza as part of its Lonzacure line. Performance is more in line with MOCA, but cost—5.5 times that of MOCA—is not.

Switching to a wholly new formulation based on MDI could have advantages, notably cost, experts say. MDI-based prepolymers are cured with butanediol, a large-scale petrochemical that is much cheaper than MOCA or its replacements. A company going through the trouble of replacing the diamine in a TDI system—and all the materials testing that endeavor involves—may as well look into MDI, Demarest says.

Companies have been switching from MOCA/TDI to MDI-based systems since the 1980s, Fitzgerald says. But he knows why some firms haven’t changed yet: MDI systems are considered more difficult to work with than TDI prepolymers.

MDI formulations are more sensitive to moisture, and the ingredients need to be measured with greater precision. Furthermore, MDI reacts more exothermically than TDI, making the fabrication of large parts challenging. Switching to MDI can entail spending on equipment to handle the more delicate chemistry.

Some companies wouldn’t take the plunge into MDI were it not for the regulatory push, Fitzgerald acknowledges. Dow is working with such firms to come up with MDI-based alternatives.

Chemtura also sees an opportunity in the new regulations. It is expanding capacity in Latina, Italy, for “low free” MDI prepolymers, which have little residual unbonded MDI in them. They are particularly good at matching the hardness and dynamic properties of MOCA/TDI, Peter says.

Fitzgerald is counting on the robustness of urethane chemistry to save the day. “We don’t see this being easy for those people who are currently using MOCA,” he says. “But we do know that the versatility that the chemistry gives us means there are solutions for people.”

Materials
Pushing wind turbine blades toward 200 meters
Business
High-Performance Isocyanate Paint Ingredients Come Under Scrutiny
Endocrine Disruptors
Plasticizer Makers Want A Piece Of The Phthalates Pie
Share X
To send an e-mail to multiple recipients, separate e-mail addresses with a comma, semicolon, or both.
Title: Polyurethane makers prepare for a phase out
Author: Alexander H. Tullo
Chemical & Engineering News will not share your email address with any other person or company.