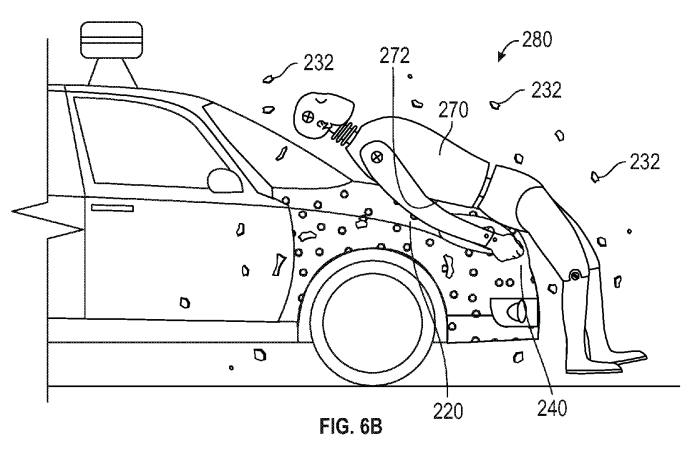 Pedestrians struck by cars might find themselves glued to their automobile assailants in a few years, if a patent recently awarded to Google turns into a real product.

The concept described in U.S. Patent No. 9340178 is for an adhesive layer to be applied to the front end of a vehicle, which might include a conventional or self-driving automobile or “a truck, bus, van, semi-trailer truck, motorcycle, golf cart, ATV, off-road vehicle, or farm vehicle, as well as a carrier that rides on a track such as a rollercoaster, trolley, tram, or train car.”

The adhesive layer would be covered by a coating that would break on impact to expose the adhesive. Whatever broke the coating would then stick to the front of the vehicle. The goal is to protect pedestrians from injuries they might sustain in additional impacts with the road or other objects if thrown from the vehicle after initial impact.

But for a patent titled “Adhesive Vehicle Front End for Mitigation of Secondary Pedestrian Impact,” it is remarkably short on information about the adhesive itself.

There is plenty about the mechanics of the vehicle, sensors the vehicle might include, and how the sensory information might be processed. For example, the patent states that the sensor system “may include a number of sensors configured to sense information” about the automobile’s environment. Such sensors include a Global Positioning System module, an inertial measurement unit, a radio detection and ranging (radar) unit, a laser range finder and/or light detection and ranging unit, a camera, and actuators “configured to modify a position and/or orientation of the sensors.”

The patent appears to have been the work of a couple of mechanical engineers. The Newscripts gang suggests that Google involve a few chemists, too.

The call came from inside 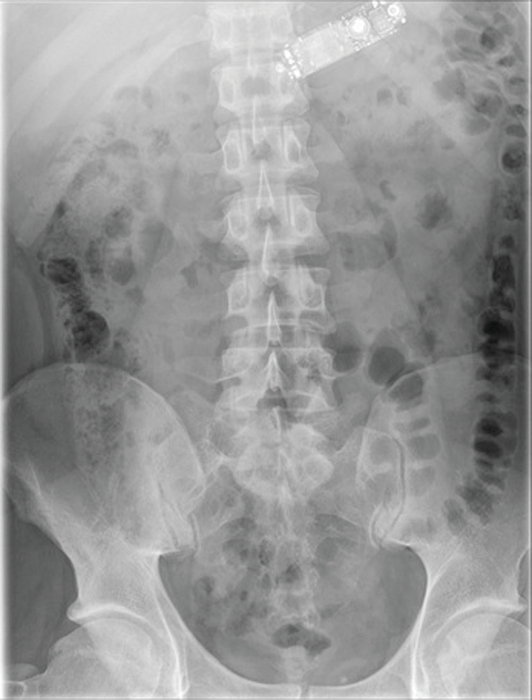 Should you swallow your mobile phone, be warned that it might not come out as easily as it went down.

Eighteen hours after ingestion, the phone remained in the patient’s stomach. The hospital team attempted to retrieve the phone endoscopically by passing a camera and other tools down the patient’s throat and esophagus into his stomach. Unfortunately, “following failed attempts at endoscopic removal, using endoscopic snares, graspers, tripod forceps, and baskets, the endoscopic approach was abandoned,” the paper says. “The mobile phone could not be aligned correctly to allow for a safe retrieval while limiting the potential harm to the esophagus.”

The team wound up removing the phone surgically, going through the patient’s abdomen to make a 30- to 40-mm incision in the patient’s stomach. Seven days later, he was discharged from the hospital.

In the future, the hospital team recommends that physicians faced with a swallowed phone get consent for both endoscopy and surgery and have a surgeon available so that if endoscopy fails, the patient doesn’t need to be roused between procedures. There is no word on whether the phone still worked after a day in a stomach, although it was sent for forensic examination, presumably because the patient—a prisoner—wasn’t supposed to have it.