HPLC struggles with its version of Moore’s Law 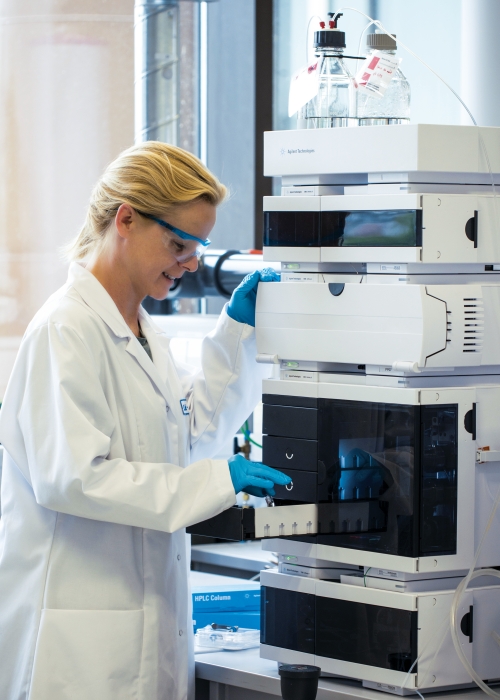 High-performance liquid chromatography (HPLC) gives chemists access to a world of knowledge about molecules both large and small. When combined with high-resolution detection methods such as mass spectrometry, the historic separation technique can not only help reveal hitherto unseen paths leading to new treatments for diseases, but it can also shed light on the complex array of contaminants in the water we drink or reveal banned pesticides in the food we might place on our tables.

As HPLC has matured over the past half-century, research scientists have been setting their expectations higher for what the technology can do: They want faster and more accurate results, and they want the ability to detect ever tinier amounts of compounds in limited and difficult-to-obtain samples.

HPLC struggles with its version of Moore’s law

Electronics and software are doing their part to make rapid and often complex sample analysis accessible to more than just the trained experts, say HPLC makers such as Thermo Fisher Scientific, Agilent Technologies, and Waters Corp. But a host of new strategies, some of them once considered extreme, have also enabled HPLC advances through the use of higher pressure pumps, thinner tubing, shorter columns, and, most important, tinier column-packing particles.

Some chromatography experts liken advances in HPLC to Moore’s law, a prediction that the number of transistors on silicon chips doubles every 24 months to enable computer processing speeds to increase. They say that just as Moore’s law will soon reach its limit, so too will expectations that tinier HPLC particles can continuously deliver better separations.

Driving many of the latest chromatography developments are pharmaceutical and biomedical research, says Christopher J. Welch, distinguished scientist at Merck Research Laboratories. In pharmaceutical synthesis, Welch says, high-throughput experimentation generates a lot of samples, leading to a need for speedy analytical techniques.For Merck, speed is particularly helpful for chiral separations, in which scientists tease apart enantiomers, he notes. These types of separations help the firm screen for the right conditions to make drugs with high enantiomeric purity.

“When I started in 1981, people were okay with separations that took an hour to do,” Welch says. But over the years columns improved, speeding up separations to 10 minutes or less, he says. They achieved this mostly by reducing the size of silica particles and by introducing core-shell technology: particles containing a solid silica core surrounded by a thin porous shell. Compounds in a mixture interact more with the stationary-phase core-shell particles, leading to better and faster separations.

Also helping speed things up are higher pressures and shorter plumbing runs among the sample injector, column, and detector. “We now see many separations in less than a minute, some in just a few seconds,” Welch says. “These are often using 1-cm-length columns. And we need even shorter columns to go faster,” he adds.

But screening complex proteins, where a researcher might want to look at 500 peaks in a chromatogram, “is going to be a god-awful mess if you try to do it in a minute,” Welch says. For the analysis of such complex molecules, a researcher would need more time and greater resolving power, he says.

The revolution in analyzing proteins started about 30 years ago when Genentech started making recombinant protein therapeutics via fermentation, says Chris Pohl, vice president of chromatography chemistry at Thermo Fisher. “They needed to develop good quality-control techniques to be sure they were producing breakthrough treatments like human growth hormone without impurities,” he says. “And for quality control, good resolution is what matters.”

Among the biggest developments, Pohl says, was the adoption of core-shell column particles in the mid-2000s. The smaller the particle, the higher the resolution that can be attained, he says.

Today’s leading-edge core-shell particles range in size between 1.5 and 1.9 μm, Pohl notes. It has been a slow, steady move from the 10-μm silica particles of the late 1970s to the 3 μm that came out in the 1990s to the current versions. 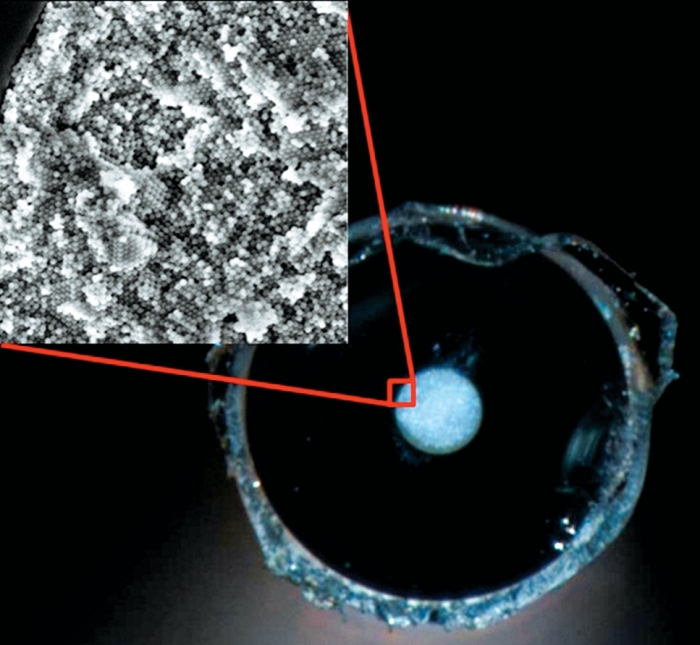 Credit: Mary J. Wirth
An experimental capillary silica column with an inner diameter of 75 μm is packed with 500-nm silica particles, shown in the inset and magnified with a scanning electron microscope.

Invoking Moore’s law for chromatography, Pohl notes that as particle size is cut in half, separation efficiency doubles, and the pressure needed to complete the separation quadruples. All these steps require improvements in pumps, seals, and the ability to efficiently pack columns.

Pohl figures Moore’s law for chromatography is good for another 10 years with improvements in equipment and packing. A decade from now, column particles could get as small as 500 to 750 nm, he predicts. But that’s as low as it’s likely to go, he contends.

Some chromatography experts see a problem with particles in the nanometer range. With particles at this scale, analytes under high pressure tend to heat up as they squeeze between the silica particles and skew results, says Michael McGinley, core products manager at chromatography column maker Phenomenex.

Mike Yelle, separations technology vice president atWaters, cites this frictional heating as a major limiting factor in using smaller particles. Although he is sensitive to the improvement in resolving power that lower particle size has so far brought to HPLC, “as is the case with Moore’s law and semiconductors, pretty soon the physics of smaller chromatography particles will run out of gas,” he says.

McGinley also says that smaller particles pose other challenges for column engineers. To withstand the higher pressures, the particles need to be bonded to one another. “They have to be packed in a regular structure so they don’t leave ‘holes’ that could also alter results,” he says.

While not denying there is a limit to how low particle size can go, Mary J. Wirth, a chemistry professor at Purdue University, says columns packed with 500 nm particles are doable for high-resolution protein analysis. Her firm, BioVidria, plans to launch and commercialize capillary columns packed with the tiny particles this summer.

Wirth says that, with particles as small as the ones she is using packed into a capillary tube, “pressures don’t go up as much as might be expected” because of a nanofluidic phenomenon called “slip flow” that enables high flow rates around small particles (J. Am. Chem. Soc. (2012, DOI: 10.1021/ja304177m).

University of North Carolina, Chapel Hill, professor James W. Jorgenson says the concept behind the use of submicrometer particles is “probably one of the most exciting developments in the last decade. Many people are not aware slip flow could exist.” But he wonders whether the nanometer-packed columns will “translate into things people can do in their labs.”

Wirth is convinced the subnanometer columns are practical. A 5-cm-long reverse-phase capillary column packed with 500-nm particles can provide high-resolution separations for proteins such as antibody-drug conjugates using HPLCs on the market today, she contends.

Going to even smaller particles, though, might be a problem. Wirth says 300-nm particles restrict the movement of large proteins. But for high-resolution analysis of small molecules, 120 nm might be practical.

Until and unless columns such as those Wirth proposes are adopted, two-dimensional chromatography using two columns with micrometer-sized particles working on one HPLC might be the best way to get high-resolution results out of difficult-to-analyze biomolecules.

Just as the semiconductor industry has taken to “stacking” semiconductor chips to get more computing power in a small space, analytical scientists are increasingly turning to more than one column to obtain better resolution. “There’s a limit to what you can now do using one column,” says Helmut Schulenberg-Schell, business development director at Agilent Technologies. But examining each peak coming off one column and running it through a second column to see if there are additional peaks can improve detection of otherwise hidden information, he says.

“The number of compounds we want to monitor as a society is increasing,” Schulenberg-Schell notes. Where scientists might have wanted to identify just 10 or 20 pesticides in the past, they now want the ability to rapidly search for 600 or more. A human cell, for instance, has thousands of metabolites that could be monitored. Subtle changes in proteins can mean a lot when it comes to tracking biological activity, he says. Two-dimensional chromatography makes these analyses possible.

But for particularly difficult-to-analyze proteins, chip-based techniques could be an alternative to HPLC. A few years ago, Waters, for instance, introduced the IonKey, a chip-based microfluidic column intended to ease capillary-scale seperations of small samples.

An electrophoresis-based chip device could be another alternative. Boston-based 908 Devices recently introduced its ZipChip system, which integrates capillary electrophoresis and electrospray ionization into a microfluidic glass slide to prepare, separate, and inject ionized biological samples into a mass spectrometer. Thermo Fisher recently endorsed this system for use with its mass spectrometers.

“The separations we are getting between peaks in two to three minutes are as good as or better than conventional capillary liquid chromatography in 30 to 40 minutes,” says Christopher J. Petty, 908’s business development vice president. For analyzing difficult-to-prepare intact proteins, the electrophoresis-based separation method is superior to HPLC, Petty tells C&EN.

After that, chip-based columns and microfluidics are likely the next step, scientists such as Merck’s Welch suggests. And then other separation techniques, such as the ZipChip system, may nip away at the edges.

Mass Spectrometry
Shrinking mass specs
Mass Spectrometry
Mini mass specs are still looking for an audience
Analytical Chemistry
Bruker's UltrafleXtreme
Share X
To send an e-mail to multiple recipients, separate e-mail addresses with a comma, semicolon, or both.
Title: HPLC struggles with its version of Moore’s Law
Author: Marc S. Reisch
Chemical & Engineering News will not share your email address with any other person or company.