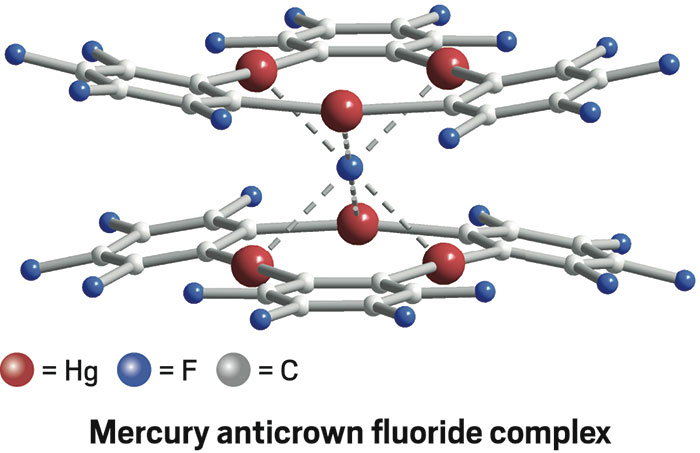 Researchers in Russia have isolated for the first time a mercury anticrown complex binding a fluoride ion. This feat comes decades after chemists first started exploring these unusual compounds. Synthesis of the mercury-fluoride sandwich opens up new possibilities in ion-sensing applications and could lead to new strategies for fluorination reactions.

Anticrowns, as the name suggests, are the chemical opposites of crown ethers, which are cyclic polyethers that tightly bind cations and help to form stable salts for catalysis and other applications. Anticrowns are also cyclic compounds, but they tightly bind anions. Chemists are interested in studying mercury anticrowns, along with related boron- and antimony-containing Lewis acid systems, as selective sensors of halide, cyanide, and azide anions, for example to monitor water quality.

One of the most studied anticrowns is the trimercury compound (HgC6F4)3. It tends to form oligomeric assemblies stabilized by “mercurophilic” interactions between mercury atoms in adjacent anticrown units. But until now, researchers had not been able to isolate individual dimers containing fluoride.

A team led by Vladimir B. Shur of the Russian Academy of Sciences’ A. N. Nesmeyanov Institute of Organoelement Compounds made the fluoride complex by mixing (HgC6F4)3 with a tetrafluoroborate salt (Organometallics 2016, DOI: 10.1021/acs.organomet.6b00231). On the basis of spectroscopic studies and the crystal structure, Shur and his colleagues show that a single fluoride is coordinated to the dimer’s six mercury atoms.

“This is beautiful work describing a stunning fluoride sandwich structure,” says François P. Gabbaï of Texas A&M University, whose group designs and studies molecular ion-sensing compounds. Gabbaï’s group once caught a fleeting glimpse of the mercury-fluoride sandwich using mass spectrometry: “However, I assumed it would be too unstable to isolate,” he tells C&EN.

What makes the complex surprising, Gabbaï explains, is that fluoride is a “hard” nonpolarizable species and mercury is a “soft” polarizable species, which chemists typically don’t expect to attract each other. Besides the “undeniable aesthetic aspects” of the new complex, Gabbaï says it will be interesting to see if the complex could release naked fluoride anions for nucleophilic fluorination reactions.