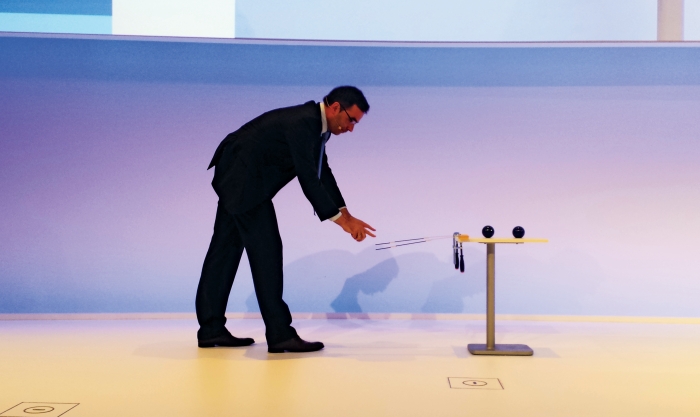 Credit: Alex Scott/C&EN
BASF’s Schädler demonstrated how manipulating the structure of a polymer can reduce vibrations.

BASF used to be the company that—with a flourish—would announce record R&D spending every year. It is still the only chemical firm in the world to have an R&D bill of more than $2 billion, but BASF is now looking to squeeze more innovation out of the same amount of money—or even less.

“The company needs to adapt its established approaches to changing conditions,” Martin Brudermüller, BASF’s board member responsible for technology, told journalists at a briefing in Ludwigshafen, Germany. “Our research commitment will not increase at the same rate as before, but our commitment to R&D will not go down.”

One of the ways BASF intends to generate more without increasing spending is by conducting R&D faster. The firm plans to achieve this by, among other things, working more closely with academia and doing away with some lab experiments by first predicting outcomes with the use of computational chemistry.

“In the future, we will need more computational chemists than lab technicians,” Brudermüller said.

But BASF is also putting systems in place to ensure that creativity is not sacrificed in the drive for efficiency. For example, the firm recently started encouraging scientists within its central R&D organization to spend 20% of their time working on their own ideas, rather than solving problems for BASF’s businesses.

“We call these ‘just do it’ projects,” said Bernhard von Vacano, senior research manager for material physics. Such projects might run for just a few weeks. But they are taken seriously, said von Vacano, who heads a team of materials scientists in a new R&D building in Ludwigshafen.

In line with previously announced plans, BASF will maintain R&D personnel at its Ludwigshafen headquarters at the current level of about 4,900. Any increase in BASF’s worldwide R&D staff—which numbers about 10,000—will be in Asia.

Whether it is in Mumbai, Shanghai, or Ludwigshafen, BASF is also attempting to build creativity into the R&D process by running structured brainstorming workshops named Creator Space meetings. The firm introduced the concept last year during its 150th anniversary celebrations.

In the future, we will need more computational chemists than lab technicians.
Martin Brudermüller

One of its most successful Creator Space workshops was a joint event with customer Daimler to come up with ideas for improving Daimler buses. Thirty-five materials scientists and engineers from BASF and Daimler apiece came up with 40 ideas for new technologies, including specialty coatings and foams for improving the soundproofing of bus engines.

Developing soundproofing or vibration-dampening products using materials such as blown polyurethane foam is a growing field of R&D for BASF, said Volker Schädler, head of polyurethanes research. Just reducing the size of the pores in polyurethane foam by 10% can increase its ability to dampen noise by a factor of two, Schädler observed.

Vibration and noise reduction can be enhanced by varying the shape, thickness, or pore size of a foam. Cross-linking polyurethane with natural rubber has enabled BASF to develop a range of uniquely versatile vibration-reducing elastomers, Schädler said.

Material density is another characteristic that can be varied to cut noise or vibration. Schädler likened the chemist’s role to that of a cook whipping up a meringue.

BASF is applying the same philosophy to agriculture, where unlike most of its rivals, it has not struck a big merger or acquisition agreement. Executives tried to assure reporters that the company doesn’t feel backed into a corner and that its agricultural chemicals business continues to be profitable and innovative.

Making the point, BASF at the briefing unveiled an engineered-yeast-based process for making phytase, an enzyme added to animal feed to make phosphorus more bioavailable.

BASF said the new phytase is thermostable during pelleting and is twice as effective as the firm’s standard phytase product. The firm started the project by building a model of an ideal phytase. It then combined the DNA of the most suitable phytases in its library of thousands to generate one enzyme with optimal stability and performance.

With such projects, BASF’s scientists demonstrated that they can still pull creative rabbits out of the hat. In the future, though, they will have to show that—as with the phytase—the way in which they innovate is also efficient.

Comments
Robert Buntrock (June 23, 2016 10:35 AM)
3M championed the support of "idea" research for decades (although I heard they've cut back on this). If you had an idea or project that couldn't be funded in your research group, you could seek funding from other groups within the company. Other companies sometimes offered funding for "blue sky" research by senior scientists but the one I'm most familiar with ceased that after several reorganizations and eventually a buyout.
Reply »