The German chemical company Grillo-Werke says it has mastered a reaction that has long eluded chemists: the direct combination of methane and sulfur trioxide to yield the strong acid methanesulfonic acid (MSA).

Following years of research, Grillo says, its scientists came up with a tailored reaction environment and specific activators that overcome methane’s limited reactivity. The reaction temperature is between 30 and 60 °C, and the pressure is moderate, the firm says. It plans to build a large-scale facility, likely at its Frankfurt site, by 2019. 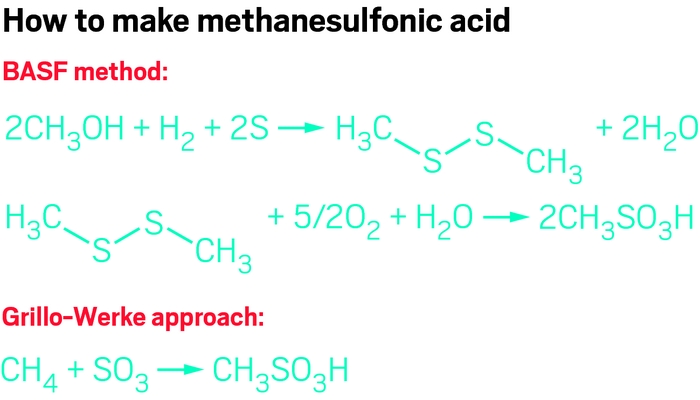 Today, MSA occupies a small niche in the industrial acid world. BASF, the world’s largest chemical company, is the world’s largest producer, operating a 30,000-metric-ton-per-year plant at its headquarters in Ludwigshafen, Germany. The company says it is evaluating the possibility of a second MSA plant following the 2013 cancellation of a large complex in Malaysia that would have included one.

However, BASF employs a more complex reaction in which it combines methanol, hydrogen, and sulfur to yield dimethyl sulfide, followed by catalytic oxidation to MSA. Another producer, Arkema, uses a two-step process involving the chloroxidation of methyl mercaptan.

Despite the simplicity of the new reaction, Christian Ohm, the Grillo board member responsible for the firm’s chemical division, acknowledges that MSA will never be as cheap as sulfuric acid, which is made by reacting water and sulfur trioxide. But unlike sulfuric acid—the world’s largest-volume chemical—MSA is not corrosive, is readily biodegradable, and is toxicologically unproblematic, the company notes.

“At a significant scale, potential applications for MSA are virtually endless,” Grillo says.

The acid is already being used in electroplating, electronics, industrial cleaning, and pharmaceutical manufacturing. BASF says it explores the applicability of MSA “wherever a Brønsted catalyst is being used.” It emphasizes MSA’s biodegradability, high performance, good selectivity, ease of purification, and regulatory advantages.

More broadly, Grillo sees the direct sulfonation of methane as an achievement in the search for uses of methane beyond burning for heat and energy. Other research focuses on direct oxidation of methane to methanol and oxidative coupling to ethylene.