Students head to the International Chemistry Olympiad in Tbilisi, Georgia 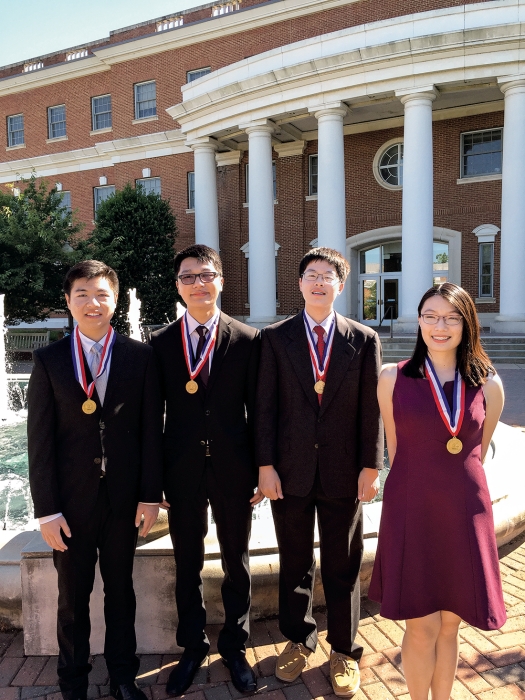 Credit: Kelli Slunt
Pan (from left), Tang, Liu, and Tian with their medals.

Four high school students have been selected to represent the U.S. at the 48th International Chemistry Olympiad (IChO), which will be held in Tbilisi, Georgia, from July 23 to Aug. 1.

Seventy-one countries will participate in this year’s competition, with each country sending a team of up to four students. The competition was moved to Tbilisi from Karachi, Pakistan, after several countries declined to attend because of security concerns.

The U.S. team members are Alex Liu of the Village School, in Houston; Zilu Pan of Canyon Crest Academy, in San Diego; Kevin Tang of Solon High School, in Ohio; and Joyce Tian of Thomas Jefferson High School for Science & Technology, in Alexandria, Va. The two alternates will be Steven Liu of Monta Vista High School, in Cupertino, Calif., and Harrison Wang of Hinsdale Central High School, in Illinois.

The 48th IChO at a glance

The team was announced at the conclusion of an intensive two-week study camp, held May 31 to June 15 at the University of Mary Washington, in Fredericksburg, Va. The study camp is sponsored by the American Chemical Society.

“We have a very well-rounded team, and they each have areas in which they excel,” says head mentor Kelli Slunt, a chemistry professor at the University of Mary Washington. “Zilu is very strong in the laboratory. Kevin is very strong in organic theory. Joyce and Alex both excel in the mathematical areas. I’m really proud of them.”

Liu says that attending the study camp helped him strengthen his laboratory techniques. “I improved a lot,” he says.

“We have a very well- rounded team, and they each have areas in which they excel.”

The preparation during the study camp, Pan says, exposed him to the time limitations he would be under during the international competition. “It’s given me a taste of what it would be like, so I’m more mentally prepared.”

Tian says she made lifelong friends during the study camp. “Every single person was both super-motivated and super-helpful to each other, so there wasn’t as much pressure as I was expecting.”

Tang says he’s looking forward to broadening his perspectives at the international competition. “As a high school student, you’re not introduced to the more advanced fields, or to what it’s like to be a professional in the field,” he says. “One of the main things I’d like to do is explore all there is about chemistry and get a better idea of my interests in the field.”

Other mentors for the U.S. team include Patrick Chan of Benjamin N. Cardozo High School, in New York City; Christine Saber of Gannon University, in Erie, Pa.; and Jacob Sanders and Sidharth Chand of Harvard University. This was the first year the study camp took place at the University of Mary Washington.

The U.S. team initially had canceled its participation in IChO when it was scheduled to be held in Pakistan. ACS made the decision based on the U.S. Department of State’s recommendation to U.S. citizens to avoid all nonessential travel to Pakistan.