Could stereopurity reinvigorate the antisense field? 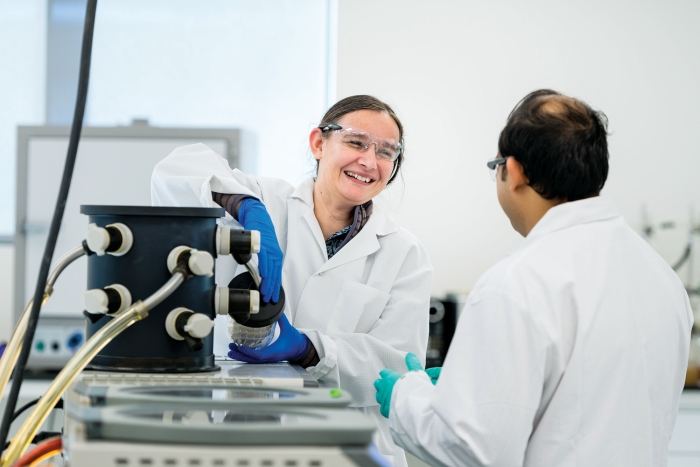 All new drug technologies live through cycles of hype, disappointment, and realism. But few scientific approaches have gone through as many twists and turns as nucleic acid therapeutics, drugs that use strands of genetic material to tackle the underlying causes of disease.

Wave Life Sciences at a glance

Wave Life Sciences is hoping to break that cycle. The company is founded on the notion that earlier oligonucleotides have a fundamental flaw: They are complex mixtures of hundreds of thousands of stereoisomers.

Armed with technology to design and manufacture stereopure oligonucleotides, Wave will soon start to roll out data and clinical trials that it hopes provide the first evidence supporting the notion that a single oligonucleotide works better than a mixture. Company watchers, many of whom are skeptics, are eager to see what emerges.

Wave emerged from stealth mode in 2015, having generated enough confidence in its technology to convince venture capital firms to invest $18 million. That November, the company went public, raising more than $100 million in its initial offering.

Already, Wave has multiple compounds in its early-stage pipeline, including two Huntington’s disease drug candidates that will be ready for human tests by the end of the year. A drug for Duchenne muscular dystrophy (DMD) will start Phase I clinical studies next year.

Wave is putting a new spin on a decades-old concept. Companies have been developing oligonucleotides—short pieces of single- or double-stranded DNA or RNA also known as oligos—as therapeutics since the 1980s. Among the oldest players working on antisense drugs, which use single-stranded nucleic acids to tinker with or turn off errant protein production, are Ionis Pharmaceuticals and Sarepta Therapeutics.

But all of that research and countless clinical trials have amounted to just two antisense drug approvals. Neither is a commercial success.

Recent months have been particularly hard for the field. Drisapersen, BioMarin’s antisense drug for DMD, was rejected by the Food & Drug Administration and pulled from development. Eteplirsen, a competing treatment from Sarepta, is in a holding pattern as FDA considers whether it is enabling sufficient production of the key protein missing in patients with DMD.

And Ionis’s partner GlaxoSmithKline last month said it would not pursue a Phase III study of an antisense treatment for transthyretin amyloidosis after some patients experienced dangerously low platelet counts. Ionis’s stock dropped nearly 40% after the company said the low-platelet problem had been seen with another drug in its pipeline.

Those disappointments come despite more than 30 years of effort by academic and industry researchers to improve the potency and safety of antisense drugs. Researchers have focused on modifying the decorative elements of nucleotides’ ribose ring to strengthen the oligos’ binding to their RNA target.

Yet all along, researchers have largely used the same stitch to sew together the nucleic acids: They replace the oxygen on nature’s phosphodiester linkage with a sulfur. The resulting phosphorothioate group helps keep oligos from being chopped up by nucleases before reaching their target, but the approach also has consequences.

At each linkage, the modification introduces a chiral center—a three-dimensional aspect of the drug that companies can’t control during manufacturing. Given that the typical antisense therapeutic is a stretch of 20 nucleic acids, the resulting 19 chiral centers mean a single dose is actually hundreds of thousands of strands with the same sequence but different 3-D configurations. And just as with small-molecule drug racemates, the body responds differently to different oligonucleotide stereoisomers.

Wave founders Gregory Verdine, a serial entrepreneur and Harvard University professor, and Takeshi Wada, from Tokyo University of Science, had separately become convinced that those chiral centers were responsible for holding back the oligonucleotide field. Each had started companies—Verdine launched Ontorii, and Wada founded Chiralgen—to work on stereopure nucleic acids. In 2013 they combined their efforts, and names, to form Wave.

They had a two-part problem: figure out how to efficiently make stereopure nucleic acids and then prove that a single drug actually works better than the mixtures that had been tested for years.

The former is not a trivial proposition. “This is something the field since its inception in the 1970s has not been able to do because the chemistry is so demanding,” says Jonathan Hall, a pharmaceutical chemistry professor at the Swiss Federal Institute of Technology (ETH), Zurich.

This is something the field since its inception in the 1970s has not been able to do because the chemistry is so demanding.
Jonathan Hall, pharmaceutical chemistry professor, Swiss Federal Institute of Technology, Zurich

It took years of work for companies just to manufacture mixtures of oligos at commercial scale. Even as production has become more efficient, yields continue to be low, and many researchers see the economical synthesis of stereopure phosphorothioates as a pipe dream.

Wave has made a huge investment to scale its stereopure nucleic acids from grams to kilograms and is now working to bring down production costs. “As we continue to scale, we don’t anticipate that by the time we get to commercial supply there will be a cost-of-goods difference between a stereopure versus an unpure drug,” Bolno says.

The second problem is proving that a single drug actually works better—is safer, more stable, and more potent—than the mixtures companies have been working on for years. Bolno stresses that getting to that single drug isn’t as simple as making a stereopure version of earlier antisense drugs or plucking the right isomer out of the mixture.

[+]Enlarge
Modifying the link between bases improves the therapeutic effect of an oligonucleotide but also creates a tough-to-control chiral center. 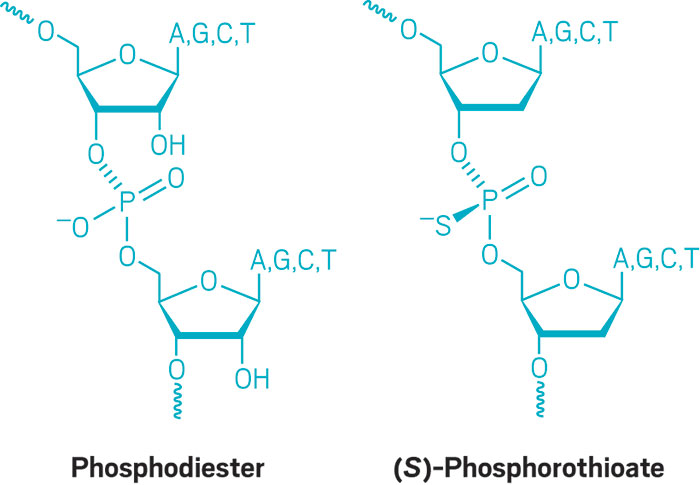 Modifying the link between bases improves the therapeutic effect of an oligonucleotide but also creates a tough-to-control chiral center.

“This isn’t an empirical screening exercise,” he says. Rather, Wave researchers start out by looking at how the backbone of an oligo interacts with its target enzyme. That means using structural biology insights and rational design to create the most efficient compounds, says Chandra Vargeese, Wave’s head of drug discovery.

The limited data Wave has made public, most of it for its DMD program, show the potential of the stereopure approach. Wave’s oligo was 30 times as potent as both drisapersen and eteplirsen when tested in patient-derived cells. And in a mouse model commonly used in DMD research, the stereopure drug did a far better job than drisapersen in reaching skeletal muscles, as well as the heart and lungs.

Promising, yes, but Wave’s core hypothesis—that controlling chirality will lead to better drugs—still courts plenty of controversy. Many nucleic acid experts regard Wave with a mix of intrigue and skepticism.

The skepticism comes partly from the lack of data. In addition to providing scant information on how well its technology works, Wave has only shown data comparing its compound to drisapersen, an older antisense drug, rather than next-generation oligos featuring ring modifications that have greatly improved the potency of the molecules.

“A stereopure molecule would certainly be an exciting thing to test; there’s no doubt about that,” says David Corey, a chemist at the University of Texas Southwestern Medical Center who has worked on oligonucleotides for decades. “But we have to balance that with skepticism. History has taught us that these experiments will need to be well designed, well controlled, and transparent so that people in industry and academia can make judgments.”

That history is largely one of disappointments. The field of nucleic acid therapeutics has seen one unwelcome surprise after another, such as unexpected side effects or lack of efficacy, warns Corey, who has collaborated with Ionis in the past.

Bolno knows that skeptics abound and is ready with responses. He first points to a partnership with Pfizer announced last month as validation of the technology. The big pharma firm paid $40 million up front to collaborate on five drug programs.

“Never underestimate pharma due diligence,” Bolno says, adding that most big pharma companies have gone through earlier antisense partnerships—most of which failed—and understand well the complexities of the technology.

Bolno notes that Wave has several publications that can soon go out because it has finally secured or filed the spectrum of patents needed to protect its technology. And this week, the company is making its first formal scientific presentation at Parent Project Muscular Dystrophy’s annual meeting.

As results begin to roll out, Wave will quickly learn whether they are antidote or ammunition for its skeptics.

Start-ups
Dyne Therapeutics launches with $50 million for oligonucleotide muscle delivery﻿
Business
Have antisense oligonucleotides hit their stride?
Neuroscience
Biogen and Ionis join in $1 billion neuroscience pact﻿
Share X
To send an e-mail to multiple recipients, separate e-mail addresses with a comma, semicolon, or both.
Title: Could stereopurity reinvigorate the antisense field?
Author: Lisa M. Jarvis
Chemical & Engineering News will not share your email address with any other person or company.