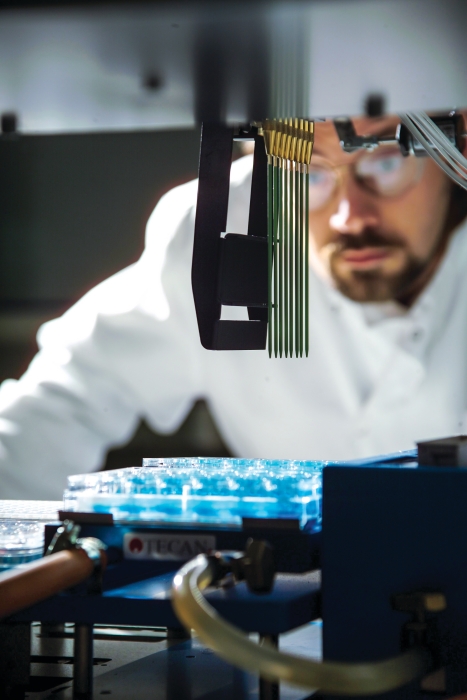 Offering contract research to the pharmaceutical industry appears to be a relatively safe business. On the other hand, drug discovery, although risky, is more interesting and potentially more lucrative. The German firm Evotec has settled on a business model that balances some of both.

After some fits and starts, the 23-year-old company is now building a business to meet the drug industry’s need for cost-efficient discovery services. But knowing that the real upside comes in the long term, Evotec also has devised a partnered drug development pipeline that has the potential to generate big future returns.

For Evotec, getting there has been part of an evolution that over two decades has included numerous acquisitions of small firms, as well as a few divestitures. A seminal moment was the 2000 merger of the originator company, Evotec BioSystems, with Oxford Asymmetry International to create a chemistry and biology services firm.

Evotec at a glance

Not too long after, Evotec strayed from the service model as it tried to advance three neuroscience drug development programs. However, clinical and commercial problems ended up hitting the company hard. “We were fortunate to have enough cash and the drug discovery services business to fall back on,” recalls Mario Polywka, one of the founders of Oxford Asymmetry and now Evotec’s chief operating officer.

As a result, in 2009, Evotec backed away from expensive and risky drug development activities and began rebuilding its business. This restart moved it down a path that eventually led to its hybrid model.

“We have a fundamental drug discovery services business, which is profitable, cash-generative, and sustainable, and that makes up about 80% of our business,” Polywka says. Work in this business, called EVT Execute, ranges from basic fee-for-service jobs to more collaborative projects in which teams of full-time Evotec scientists advance a client’s intellectual property (IP).

Meanwhile, the other 20% of Evotec’s business, called EVT Innovate, is in advancing IP that the company has brought in from academia or created on its own. The company develops this IP by combining its scientific and disease-area expertise with the same drug discovery capabilities it offers clients. These include tools covering preclinical target and compound identification through lead optimization.

In either case, Evotec usually stops work when it gets to a preclinical development candidate, but it’s not where the firm’s long-term interest ends. Instead, as partners take on the responsibility for moving programs into clinical development and beyond, Evotec often retains a supporting role and stake in their future success. And it manages to do this without having to spend any more money.

For instance, in large EVT Execute projects, Evotec may negotiate with customers to receive clinical development milestone payments and future royalties in exchange for reducing its scientist fees on the initial preclinical work, Polywka explains.

Likewise, to generate a return on its own EVT Innovate projects, Evotec advances them to a stage that’s suitable for partnering so it can strike similar development deals. In both cases, “we do not bear any of the costs once a project goes to a partner,” Polywka says.

After doing this for several years, Evotec has the opportunity to see a return from 70 drug development programs, most of which are still at the preclinical stage. Over the past five years, it has delivered 30 preclinical and 20 clinical candidates.

Of course, it’s the risky nature of drug development that the company may not see all of the upside if programs fail. For example, in 2011, Evotec took a fee of $10 million to work with Roche on an Alzheimer’s drug discovery program that promised up to $820 million in milestones. But the program hit clinical setbacks in 2015 and was stopped by Roche. More recently, Janssen decided to halt a program for depression that was part of a $175 million deal from 2012.

“We know attrition is high and works against you in drug discovery,” Polywka says, which is why Evotec partners early and in programs with multiple targets and candidates. Most of its efforts center on small-molecule drugs.

Were it not for its comprehensive drug discovery platform, disease-area expertise, and financial stability, Evotec wouldn’t be able to strike such potentially lucrative deals, Polywka believes.

“It is a competitive market, and China and India have come into it quite strongly,” he says. Although pharma companies are likely to continue to outsource work to Asian firms, which typically charge half as much, “we are seeing projects now coming back from the East into our shop,” he says.

One reason, Polywka suggests, is an inability among many Asian firms to drive a drug discovery program forward. Although they may be good at functional tasks, such as making compounds or running tests, they often don’t have the scientific expertise and skills to manage projects.

“That is where we differentiate ourselves,” Polywka says. “We don’t want to do projects where we are making lots of compounds.” Not only does it not work with Evotec’s cost structure, “it doesn’t feed our aspirations for what we want to deliver as a company from an innovation and quality-of-science perspective,” he says. “We want to have collaborations, and within those, we will be paid well.”

In fact, in 2014 when Atlas Venture launched the biotech firm Padlock Therapeutics, it spent more than half of the Series A funding on a single, large collaboration with Evotec, Atlas venture capitalist Bruce Booth said in March on his blog. With 25–30 Evotec scientists dedicated to Padlock, “they were essentially our entire discovery execution team,” he said.

Booth admits that going with just one provider was risky. But it also simplified Padlock’s research project management and, “by design, made us one of the more meaningful clients for Evotec—so we got the kind of attention we needed,” he wrote.

In 2015, Evotec reached 177 alliances, 89% of which were with repeat customers largely in Europe and the U.S. Its biggest corporate partners are Sanofi and Bayer. Evotec has a 10-year relationship with the Huntington’s disease-focused CHDI Foundation. Together, these three partners accounted for nearly half of Evotec’s 2015 revenues.

Working with Evotec since 2012 in a program targeting endometriosis, Bayer has paid several milestones. The five-year deal included $13 million up front. Payments of up to $640 million more are possible, as are double-digit percent royalties depending on which partner finds a successful compound.

In early 2015, Evotec entered what is arguably its most significant alliance. The firm was approached by Sanofi, which was consolidating its R&D operations and looking to outsource. After a long negotiation, Evotec acquired Sanofi’s large drug discovery site in Toulouse, France.

“It ticked so many boxes for us,” Polywka says about the site’s chemistry, biology, and compound-management capabilities as well as its more than 200 employees. “It was a great opportunity to get access to fabulous, fit-for-purpose operations and to people that we probably couldn’t have done otherwise at that scale that quickly.”

Under the deal, Sanofi paid $44 million up front and committed another $278 million over five years. Evotec is providing drug discovery services to Sanofi in the areas of oncology and diabetes. It also manages Sanofi’s compound library, which it will offer along with its own to third parties for screening.

In 2015, Evotec’s revenues rose 47%, or 9% without the Sanofi deal. This year, the company expects its business to grow about 15%, excluding any milestone payments that may come in. Meanwhile, it intends to invest about $22 million in its own research programs and $11 million to upgrade and expand its capabilities. This year, it even created its first spin-off, the nanoparticle drug firm Topas Therapeutics.

Stock analysts that follow Evotec approve of the changes the company has undergone in recent years. In a recent report to clients, Roth Capital Partners analyst Michael Higgins said he has “noticed a continual expansion in the capabilities and relevance of Evotec’s drug discoveries.”

Polywka sees the changes too. “We have an organization now that is over 1,000 people,” he says. “We want to provide a stimulating environment for our employees, we want to do first-in-class science, and we want to make money and give a return to our shareholders.”

“So it’s a tremendously exciting and rewarding business,” he adds, “and if we can be part of the development of a new medicine, then that is really the cherry on the cake.”