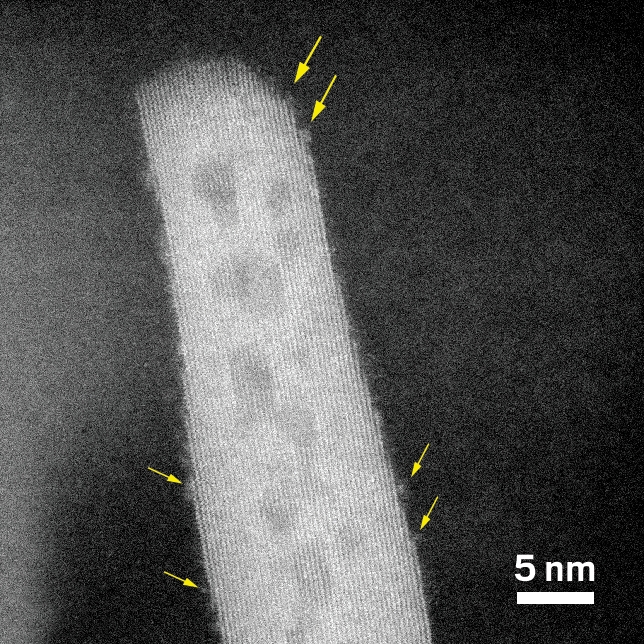 Credit: Science
Pt atoms (arrows) on the edges of this ceria nanorod remain isolated even after the material has catalyzed CO oxidation reactions.

In a feat that could be described as taking the bull by the horns, researchers have exploited a process that normally destroys supported metal catalysts to make stable ones consisting of isolated platinum atoms on a solid support (Science 2016, DOI: 10.1126/science.aaf8800).

The counterintuitive strategy may offer a practical way to maximize the use of platinum and other expensive noble metals by producing stable single-atom catalysts.

Tiny particles of platinum can transform petrochemicals, clean up engine emissions, and catalyze other reactions. But when exposed to high temperatures and oxidizing conditions, the particles agglomerate, forming larger particles. Known as Ostwald ripening, the process reduces catalytic activity by burying the majority of the atoms in the growing particles’ interiors, where they can’t catalyze reactions.

Rather than avoiding those conditions, a team led by University of New Mexico chemical engineer Abhaya K. Datye exploited them, sacrificing an alumina-supported platinum nanoparticle catalyst to make a catalyst consisting of isolated platinum atoms on ceria. Datye described the work last week in China at a conference on single-atom catalysis at the Dalian Institute of Chemical Physics. 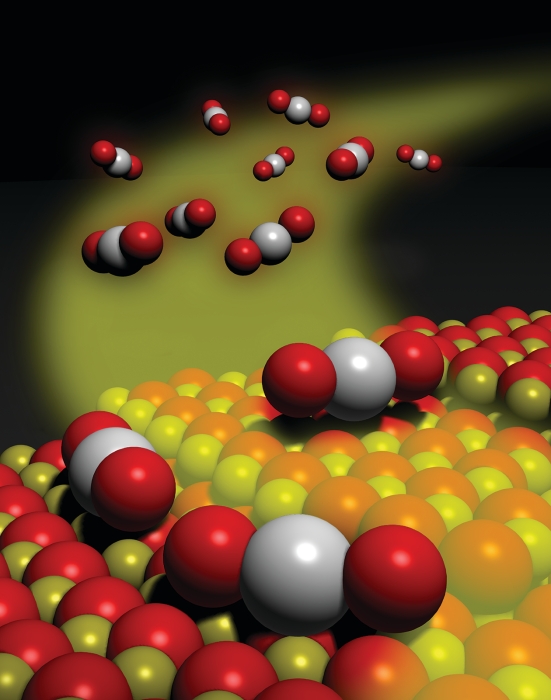 Credit: Abhaya Datye/U of New Mexico
When exposed to high temperature in air, platinum desorbs from Pt nanocrystals as PtO2 (gray and red), and can be trapped on CeO2 (gold and red).

From earlier work, Datye and coworkers knew that hot oxidizing conditions turn platinum nanoparticle catalysts into larger, less active platinum clumps by converting the metal to PtO2, which is volatile and desorbs from nanoparticle surfaces. Datye reasoned that this supply of mobile atoms could allow his team to produce single-atom catalysts. “The challenge is coming up with a way to trap those atoms individually,” he said.

Datye and coworkers wondered if ceria might serve as this atom trap because other researchers had shown that small amounts of the oxide prevented nanoparticle sintering or fusing.

They mixed an alumina-supported platinum-lanthanum catalyst with various forms of ceria and heated the mixtures to 800 °C in air for a week. After the treatment, X-ray diffraction and other methods showed the complete absence of platinum nanoparticles. Electron microscopy revealed that platinum had migrated from the alumina and become trapped as isolated atoms on ceria nanorods and octahdera along lattice features known as step edges. In the absence of ceria, the harsh treatment formed large platinum crystals on alumina.

The team showed that the single-atom catalysts were effective at CO oxidation—a key reaction in engine-emissions cleanup—and that the platinum atoms remained isolated during the reaction.

“I’m very impressed with this work,” said Northwestern University’s Peter C. Stair, a catalysis specialist who attended the conference. Coming up with a way to stabilize isolated, catalytically active metal atoms on solid supports has practical relevance for industrial catalysis, he added. “It points to strategies for making catalysts that remain stable for years.” Exactly how platinum is bound to the ceria surface remains an open question, Stair said. But that question applies equally well to most efforts to prepare single-atom catalysts.