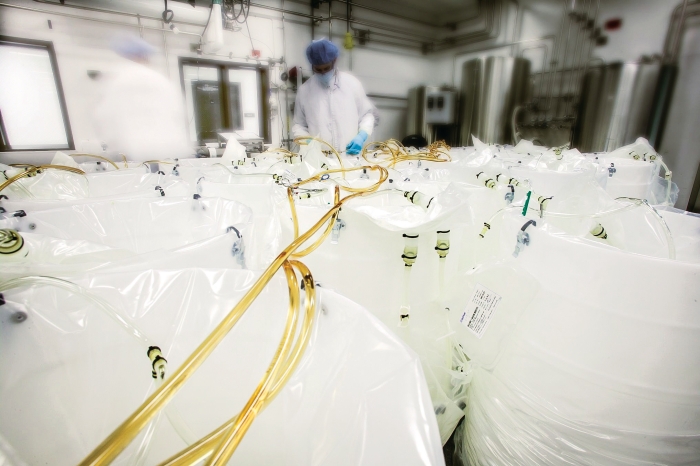 Once a novelty, bioprocessing in plastic bags has become de rigueur for producing biologic drugs in mammalian cells for early-stage clinical trials. The technique’s drug industry users have come to like how it allows for smaller factories, lower-cost operation, and greener processing than traditional stainless steel growing tanks.

Now, with an increasing number of biologic medicines advancing through the development pipeline, disposable bioreactors are beginning to migrate toward commercial market use. Meanwhile, new technology is emerging that may push single-use gear into the harsher manufacturing environment of microbial fermentation.

According to Eric Langer, president of biopharmaceutical analysts BioPlan Associates, about 75% of clinical-scale production of material certified to the U.S. Food & Drug Administration’s current Good Manufacturing Practice (cGMP) criteria is done with single-use bioreactors. Less than 5% of commercial-scale cGMP manufacturing is done with single-use technology, he says.

But major drug companies and contract manufacturers have made a big push into single-use bioprocessing recently, with WuXi AppTec and Amgen both debuting large biologics plants based on disposable bioprocessors at commercial scale. Pfizer plans to employ single-use gear at recently announced plants in Massachusetts and China.

“If you have to build a stainless steel facility, from the day you start to the day you produce material, it can be more than two-and-a-half years,” he says. “In the case of single-use, even if you start a greenfield facility, you can start producing material in 12 to 15 months. At an existing facility, you are up and running in six to eight months.”

The capital expenditure for building a single-use plant is 60 to 70% lower than for a stainless steel plant, Balekai adds, and the physical footprint of the plant is 30% smaller. “There is an almost 90% savings on water and 50 to 60% savings in energy costs.”

Thermo Fisher, which has been marketing single-use systems for more than a decade, is seeing a rapid expansion in business as the technology becomes a preferred approach in new manufacturing, Balekai says. “About three or five years back, I would say, people were starting to consider and starting to accept the technology. But now, it is a well-accepted technology.”

Amit Dua, market manager for single-use bioprocessing at GE Healthcare, agrees that the technology is making great strides. “We are absolutely seeing that, in new manufacturing capacity being built, a majority of it is using single-use,” Dua says.

GE is a pioneer in the sector, getting into single-use biomanufacturing with the 2007 purchase of Wave Biotech, which introduced a bag-based system that is rocked rather than stirred. In 2012, GE expanded its line with the acquisition of Xcellerex, a manufacturer of stirred tank systems. And the firm recently opened a $27 million life sciences headquarters in Marlborough, Mass.

System suppliers acknowledge costs and concerns associated with single-use systems, notably the laminated plastic media bags, some of which have integrated impellers and can sell for tens of thousands of dollars. The bags need to be disposed of, usually incinerated as medical waste, and the components need to be evaluated for each application to determine the possible impact of extractables and leachables—the infiltration of chemicals from the plastic into cell media.

But the costs are justified by huge savings and improved efficiency compared with operating stainless steel vessels, according to vendors and users. Bulpin adds that MilliporeSigma is working with Triumvirate Environmental, a Somerville, Mass.-based waste management firm, on developing recycling techniques for the plastics used in bags and other disposable components of reactors.

Drugmakers seem convinced about the benefits of single-use bioreactors, moving forward in a big way at new plants and with expansions. Amgen, for example, views its new Singapore plant as an opportunity to make “significant use” of disposable bioreactors, says Arleen Paulino, vice president of site operations there.

“It has allowed us to think about how we can change our operating costs from fixed to more variable cost,” Paulino says. “Traditional bioreactors tend to be upward of 20,000 L in a fairly large plant. By going to single-use technology, we have reduced reactor size down to 2,000 L, and we don’t have to install the miles and miles of stainless piping that you would see in a conventional plant.”

Capital costs in Singapore were significantly lower than for a stainless steel bioprocessing operation, Paulino says. Operating costs have yet to be determined, but she expects them also to be much lower.

Amgen is also studying the new materials going on-line in the plant. “I think it is important to do the appropriate leachables and extractables studies, really looking at how a particular plastic product reacts with your products or your solutions to know what you might be leaching,” Paulino says.

WuXi AppTec considers itself one of the strongest proponents of single-use systems, according to Chris Chen, head of WuXi Biologics, who notes that the company has already completed 40 manufacturing campaigns at its facility in WuXi City, China, using single-use bioreactors. “Now we are building a much bigger facility with 16 production bioreactors at the 1,000-L and 2,000-L scale.”

The first phase of the $150 million facility opens in September, when WuXi plans to have two 1,000-L perfusion reactors on-line. Next June, the second phase brings 14 2,000-L fed-batch units.

WuXi, Chen says, can attest to the cost advantages of the systems. The cost of incinerating the bags is minimal, he says, and although a bag for a production run can cost $30,000, that run can produce $1.5 million in revenue. Having completed so many campaigns, Chen says, the company is comfortable with the safety of the bags. 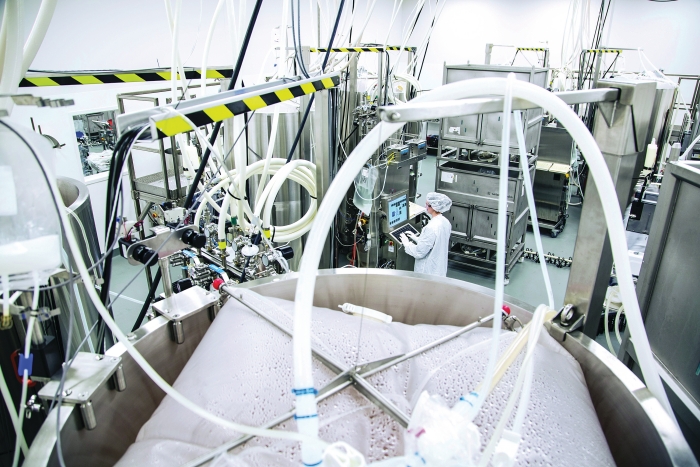 “Leachables and extractables are generally not a problem,” he says. “Our cell line is preexposed to the bags. We only select cell lines that grow in the bags.”

For Pfizer, the new facility in Andover, Mass., will take the company’s use of single-use bioprocessing downstream from small-volume regulatory and toxicology volumes, to Phase I and II clinical production, and eventually, perhaps, to commercial-scale production, according to James Bouressa, senior director of bioprocess R&D.

“It would have to be the right product,” Bouressa says. “You can’t run enough 2,000-L reactors sometimes to substitute for a 12,000-L stainless steel reactor. At some point, it is the volume of your product that will dictate whether it is done in stainless steel.”

CMC Biologics, a contract manufacturing organization with facilities in Denmark and the U.S., takes a different view on scaling up with single-use bioreactors. “We are in the middle of a capacity expansion, adding somewhere in the neighborhood of 30,000 L of capacity, using single-use reactors,” says Robert Broeze, senior vice president of global business development. “One of the things we are doing is implementing a new configuration for single-use. We call it a six-pack.”

Working with its supplier, Thermo Fisher, CMC has devised a single-use system composed of six 2,000-L reactors that can operate separately or in any combination. “We added a six-pack in Seattle that’s up and running and a three-pack in Copenhagen,” Broeze says. The Seattle installation has been running for a year. The Copenhagen system is newer and will eventually be boosted to a six-pack.

CMC is deploying single-use equipment on mammalian cell projects, but the firm is also involved in microbial fermentation, according to Broeze. “At the present time, that is in stainless bioreactors,” he says. “But from time to time, we test single-use bioreactors, and I imagine we will eventually add single-use reactors.”

Equipment vendors are beginning to roll out versions of single-use bioreactors geared for the more extreme temperatures, gassing requirements, and physical stress associated with microbial fermentation. Last year, GE introduced its XDR-500 MO, a stirred-tank system for the growth of microbial cultures such as Escherichia coli.The German firm Sartorius added a line of single-use microbial bioreactors with its acquisition of Tap Biosystems in 2013.

Industry executives agree that the move of disposal reactors from mammalian to microbial cell fermentation is typical of the field’s evolution. As in the evolution from small-scale to commercial manufacturing, at each stage, new advantages to single-use systems become apparent.

“One of the advantages we’ve seen in Singapore,” Paulino says, “is that my colleagues in the pilot and clinical facilities at Amgen have had the opportunity to work through some of the issues with the technology so that when it comes to us, we are not starting from the very basic starting point. The scale in the pilot plant, the scale in the clinical plant, and the scale in the commercial plant are all the same. It makes transfer of processes much easier.”

Outsourcing
WuXi Biologics plans its first US manufacturing facility near Boston
Outsourcing
Lonza boosts biologics in New Hampshire
Business
Contract services for biologics evolve
Share X
To send an e-mail to multiple recipients, separate e-mail addresses with a comma, semicolon, or both.
Title: Single-use becomes state-of-the-art in bioprocessing
Author: Rick Mullin
Chemical & Engineering News will not share your email address with any other person or company.