After entering orbit around the gas giant, the craft readies to study Jupiter’s core and atmosphere 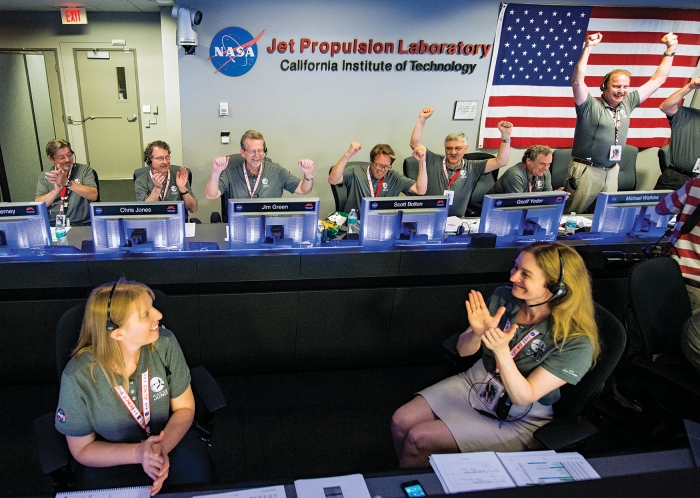 With those words from Jennifer Delavan at the Jet Propulsion Laboratory’s mission control on July 4, Juno mission team members burst into cheers. The National Aeronautics & Space Administration’s probe had just successfully performed one of the riskiest maneuvers ever undertaken by a spacecraft, braking at a high speed to settle into orbit around our solar system’s giant gas planet, while taking care to avoid Jupiter’s intense radiation.

“To accomplish a mission of this complexity is just truly amazing,” says Geoffrey L. Yoder, acting associate administrator for NASA’s Science Mission Directorate, at a press conference after the event.

The Juno mission’s goal is to help answer many questions that still remain about Jupiter’s origin. Scientists expect a trove of data about the composition of Jupiter’s atmosphere, the nature of its core and its auroras, and the characteristics of its magnetic field. This new information should allow scientists to pare down the numerous, sometimes opposing, theories about how the solar system’s largest planet formed.

MOONDANCE
Five days before its arrival at Jupiter, NASA’s Juno spacecraft captured this unique time-lapse movie of the orbits of four of Jupiter’s moons. The innermost moon is Io, followed by Europa, Ganymede, and Callisto.
Credit: NASA/JPL

Juno will get 10 times as close to Jupiter as its predecessor, NASA’s Galileo spacecraft, which orbited Jupiter from 1995 through 2003. Juno is taking a highly elliptical orbit around the north and south poles, where the planet’s intense electromagnetic fields are at their lowest.

At its closest approach, Juno will skim only 4,200 km above the planet’s cloud tops to peer into the planet’s swirling atmosphere in never-before-seen detail.

Before the orbit insertion, the Juno mission team switched off the craft’s nine instruments to protect them from radiation damage during the tricky maneuver. As of July 8, the team has reactivated five. The craft will traverse a relatively long 53-day orbit in August, and the team expects to release some preliminary data at the beginning of September.

In October, Juno’s investigation of the gas giant will begin in earnest, as the probe speeds up into 14-day orbits around Jupiter. It will orbit 37 times over the next 20 months, during which it will stream back data to Earth.

A microwave radiometer on board will detect levels of water and ammonia in the atmosphere. Other instruments will study Jupiter’s gravitational and magnetic fields.

The water and ammonia measurements will help scientists better understand how Jupiter formed. There are many theories about Jupiter’s formation that include factors such as its distance from the sun. Current data show that Jupiter contains elements heavier than hydrogen and helium at an abundance two to three times as great as the sun. 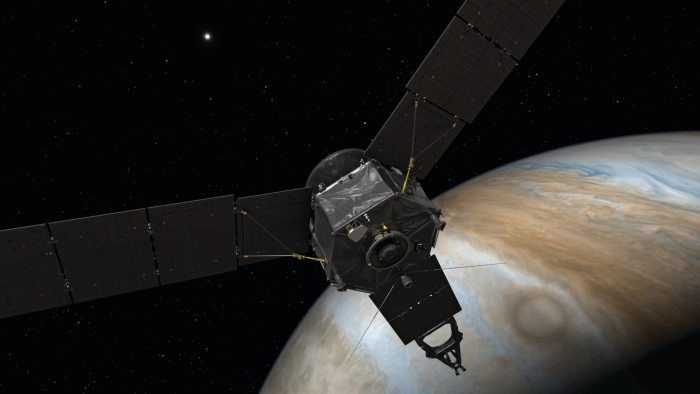 Credit: NASA/JPL-Caltech
This artist’s rendition shows Juno against a backdrop of Jupiter.

Knowing Jupiter’s true oxygen abundance relative to the solar abundance will allow scientists to narrow down their theories of how Jupiter formed.

If Jupiter is indeed depleted in oxygen, models about how and where it formed will need to be significantly revised, Scott Bolton, principal investigator for the Juno mission at the Southwest Research Institute, tells C&EN.

The mission also will help answer questions about what lies at Jupiter’s center. It’s possible that Jupiter has a core of compressed rock and ice, dense and big enough to pull in the enormous amounts of hydrogen and helium that make up the bulk of Jupiter’s atmosphere. Another theory, however, holds that Jupiter doesn’t have a core, but that hydrogen and helium make up the bulk of the planet’s composition all the way through. There’s also evidence that Jupiter contains an interior zone, located similarly to Earth’s mantle, that contains liquid metallic hydrogen and generates Jupiter’s intense magnetic fields.

By measuring how the planet’s gravity tugs on Juno, scientists could study the density and nature of the core. Magnetic measurements also could help spot a metallic hydrogen zone.

Launched in 2011, Juno flew more than 2.7 billion km to reach Jupiter. The craft took a circuitous path around the solar system and picked up speed with a gravitational assist as it flew by Earth, reaching 265,000 km per hour, making it the fastest spacecraft in history.

The mission will cost $1.1 billion, a high price tag in a climate of faster, cheaper robotic space missions, such as the New Horizons Pluto flyby, which cost $700 million.

Even though Juno is protected by a thick titanium shield, the repeated orbits through Jupiter’s intense radiation will take its toll on the craft’s instruments, rendering them too damaged to work effectively. So Juno has a planned expiration date: February 2018. At that time, scientists will deliberately steer the probe toward Jupiter, where the craft will burn up in the planet’s thick atmosphere.