How Chemists Are Sending Bad Proteins Out With The Cellular Trash

Pacifichem News: Induced protein degradation is a novel route to potential therapeutics for cancer and other conditions

Credit: Courtesy of Craig Crews
Crews and coworkers use bifunctional Protacs to tag unwanted proteins with ubiquitin, marking them for proteasomal degradation.

Like Star Wars characters, “good” proteins occasionally go over to the Dark Side. These biomolecules sometimes misfold or become modified, causing them to go rogue and wreak havoc.

Chemists have tried a number of strategies to get rid of these troublemakers. For instance, a technique called RNA interference uses short segments of RNA to block production of problematic proteins in cells. But it’s difficult to deliver RNA segments to cells, and the body often breaks them down quickly.

Another strategy for bad proteins that’s attracting growing interest is called induced protein degradation. This method tags proteins-gone-bad so they get directed to a cell’s natural garbage disposal system, the proteasome. Craig M. Crews of Yale University, whose group is one of several that have helped develop this approach in recent years, reported on his team’s latest work last month in Honolulu at the 7th International Chemical Congress of Pacific Basin Societies, or Pacifichem.

In 2001, Crews, Raymond J. Deshaies of California Institute of Technology, and coworkers demonstrated the first agent that was intentionally designed to induce protein degradation. (A few previous agents had done so incidentally.) It works by forcing unwanted proteins into close contact with a ubiquitin ligase, a member of an enzyme family that tags proteins with the peptide ubiquitin, marking them for destruction by the proteasome.

HYDROPHOBIC TAGGING
[+]Enlarge
Credit: Adapted from Nature Chemical Biology
A variation on Protacs is the use of adamantyl hydrophobic tags to mimic the unfolded protein state, causing target proteins to go directly to the proteasome for destruction. 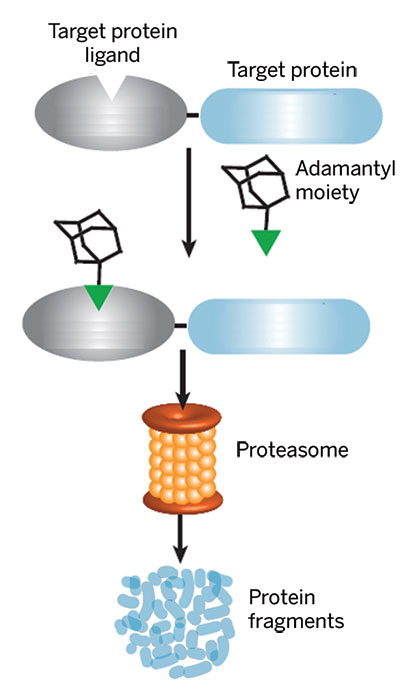 Credit: Adapted from Nature Chemical Biology
A variation on Protacs is the use of adamantyl hydrophobic tags to mimic the unfolded protein state, causing target proteins to go directly to the proteasome for destruction.

Such agents, which Crews and Deshaies call protein-targeting chimeric molecules, or Protacs, have two parts. One is a small molecule that either happens to selectively bind to an unwanted protein or has been designed to do so. This small molecule—also called a ligand—is linked to a second ligand that binds to a ubiquitin ligase. The two agents thus bring the unwanted protein and ligase together, coaxing the enzyme to mark the protein for proteasomal degradation.

Crews and coworkers have refined Protacs in the ensuing years. In a new paper that Crews discussed at Pacifichem, they report having developed a Protac that degrades Bcr-Abl, an oncogenic fusion protein that causes chronic myelogenous leukemia (Angew. Chem. Int. Ed. 2015, DOI: 10.1002/anie.201507634). The team showed that several different Protacs give very different results depending on which ligand is used and which ubiquitin ligase is hijacked, Crews explained at the session. “The take-home message is that Protac optimization requires some trial and error,” Crews said.

Crews and coworkers earlier created another way to induce degradation: using hydrophobic tags, adamantane-based compounds that mark proteins for disposal. The adamantyl moiety, which is linked to a ligand that binds to a target protein, mimics a hydrophobic unfolded protein state. A cell’s quality-control system recognizes this seemingly unfolded biomolecule and directs the tagged protein to the proteasome, which chews it up. No specific ubiquitin ligase binding agent is needed in this case, making hydrophobic tagging easier to set up compared with Protacs.

Crews and coworkers have achieved 75% degradation of several proteins in cells with hydrophobic tagging, making it a useful alternative to Protacs. But Protacs have better pharmacokinetic properties, Crews said. Hydrophobic molecules tend to bind tightly to serum proteins, so the free concentration of hydrophobic tags in the bloodstream is lower than that of Protacs.

Crews and his team aren’t the only ones working on induced protein degradation systems. In 2010, Yuichi Hashimoto of the University of Tokyo and coworkers devised constructs with two components—a small molecule that selectively binds an unwanted protein, and methyl bestatin, a compound that drags the bound protein to an enzyme that tags it with ubiquitin for disposal by the proteasome (J. Am. Chem. Soc. 2010, DOI: 10.1021/ja100691p). Administering the agent to cancer cells reduced the concentration of a metastasis-causing protein and inhibited cell migration, suggesting it could stop tumors from spreading.

Last year, James E. Bradner of Harvard Medical School and coworkers also developed a bifunctional agent (Science 2015, DOI: 10.1126/science.aab1433). It includes a small molecule that recognizes the leukemia-causing protein BRD4 and a phthalimide group that binds a ubiquitin ligase. The agent induced highly selective degradation of the protein in lab experiments and delayed leukemia progression when administered to mice.

An advantage of induced protein degradation, Hashimoto said, is that “any ligands—agonists, antagonists, inhibitors, activators, enhancers, and compounds with no apparent activity other than binding affinity—can be converted to protein degradation inducers. Binding affinity toward a target protein is the only requirement, and nearly any binding site on the protein can be used.” Protein-degradation agents could treat a number of conditions caused by problematic proteins, including cancer and neurodegenerative disorders, Hashimoto said.

Deshaies pointed out in a recent review that induced protein degradation agents have at least one drawback: They are larger and more complex than small-molecule drugs. Thus they may not be absorbed well when administered orally and may be broken down more quickly in the body. However, Bradner’s and Crews’s teams have shown that the agents work in live animals. And in cell culture the agents have been shown to act so quickly that optimizing absorption and persistence “may not be necessary or even desirable,” Deshaies said.

The promise of the induced protein degradation concept will be tested as it is being developed commercially. GlaxoSmithKline has worked with Crews’s group at Yale on the technology. Genentech and Merck & Co. are collaborating on the strategy with Arvinas, a company Crews founded. Arvinas, which launched in 2013 and secured $42 million in a second round of financing last year, hopes to enter a Protac called ARV-330 into clinical trials for prostate cancer this year.

Nurix, which launched in 2014 with $25 million in financing and is now collaborating with Celgene, uses its Molecular Glue chemistry to promote ubiquitination and degradation of disease-target proteins. And C4 Therapeutics, founded by Bradner and others, just launched with $73 million in financing. C4 is using “Degronimid technology” to break down problematic proteins.

Time will tell if the induced protein degradation concept gets chewed up like a protein in the proteasome or becomes a successful strategy for drug discovery.

Business
Interest in targeted protein degraders continues in new partnership between Celgene and Vividion
Business
Celgene picks Vividion for tough-to-drug protein partnership
Pharmaceuticals
Kymera launches with $30 million to tackle targeted protein degradation
Share X
To send an e-mail to multiple recipients, separate e-mail addresses with a comma, semicolon, or both.
Title: How Chemists Are Sending Bad Proteins Out With The Cellular Trash
Author: Stu Borman
Chemical & Engineering News will not share your email address with any other person or company.